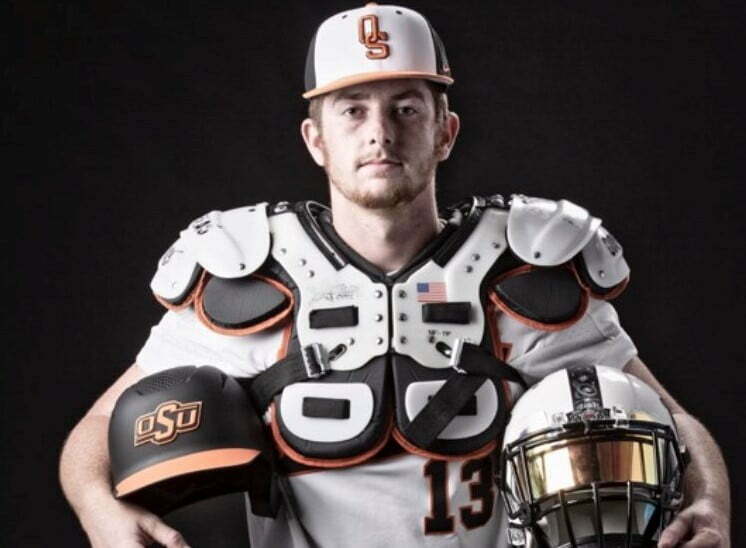 In a normal year, Nolan McLean might not have even made it to a college campus. The 6-foot-3, 225-pound rocket-armed right-hander was projected to be a high draft selection in the 2020 MLB Draft, the prodigious type of talent that rarely spends time — if any — between high school and the pros.

But the COVID-19 pandemic cut the draft down from the usual 40 rounds to five, and MLB clubs didn’t spend a draft pick on the high school star prospect from North Carolina.

Now McLean, a future pro whose career under normal circumstances would probably already have started, finds himself in Stillwater juggling his time between Boone Pickens Stadium and O’Brate Stadium. And instead of kickstarting his MLB career as many expected he would do, he honored his dual-sport commitment at Oklahoma State, performing the Josh Fields-esque task of quarterbacking by fall, and baseball-ing by the spring.

“We have some time with him each week right now around football, and from what we’ve seen so far, he’s a very gifted player,” OSU baseball coach Josh Holliday told PFB. “We’re thrilled he’s here. We’re thrilled that he chose Oklahoma State in the first place and secondly that the professional baseball draft, as it played out, the offer he was looking for didn’t present itself.

Holliday said McLean spends what time he can at O’Brate, but it’s obviously a football-heavy time of the year being the fall.

Juggling the two sports is something McLean has gotten used to. He actually missed the beginning of his senior football season because he was in South Korea with USA Baseball. He developed into a three-star football recruit after throwing for 1,683 yards and 14 touchdowns as a senior at Garner High School.

He is listed at 6-foot-3, 225 pounds on OSU’s football roster, heaviest among the Pokes’ six quarterbacks.

Like with Fields back in the early 2000s, McLean is expected to play baseball at the next level. His senior baseball season was canceled because of the coronavirus, but Perfect Game ranked him 65th in the 2020 recruiting class and noted that he throws a 94 mph fastball. That speed puts him in the 99th percentile in his class.

He started six games at first base for the U.S. at that event in South Korea, where he had five hits, five RBIs, a home run and three runs scored.

“I was actually out in the outfield [Thursday] shagging when he was hitting before everyone else,” OSU senior outfielder Cade Cabbiness told PFB. “You can tell. He’s got a lot of talent, and he’s going to be a great addition for our team regardless whether it’s now or later, but in my opinion, I can’t see it being later. I can see it being now. You can tell. He’s just a solid ball player.

It would be easy for McLean to stick to baseball and build his stock for the 2021 MLB Draft, but Holliday said McLean’s competitive drive to play both sports is exciting to see.

“It was important to him,” Holliday said. “It was part of what he saw as what he wanted for his future. At Oklahoma State, we were able to work with the two sports to provide this opportunity. Coach [Mike] Gundy and his staff and our staff, we had a game plan that we presented Nolan and his family. We felt good about it, and we stayed true to the plan. Right now, Nolan’s doing exactly what he intended to do, which is come to Oklahoma State and play both sports and enjoy the competitive passion he has for football and same with baseball. Every recruiting scenario, every young man has a different plan, if you will, or vision of what they want this college experience to be about. Certainly Nolan’s is unique.

“There are still some two-sport athletes out there, albeit there are not maybe as many as there have been in the past because I think the demands are higher than ever. But I do think, in this case, we have a young man that emotionally and personally is mature enough to handle it, academically is responsible enough to handle it and obviously physically can tolerate the workload. It is interesting, and it is unique in today’s day and age where a lot of athletes specialize at a very young age.”