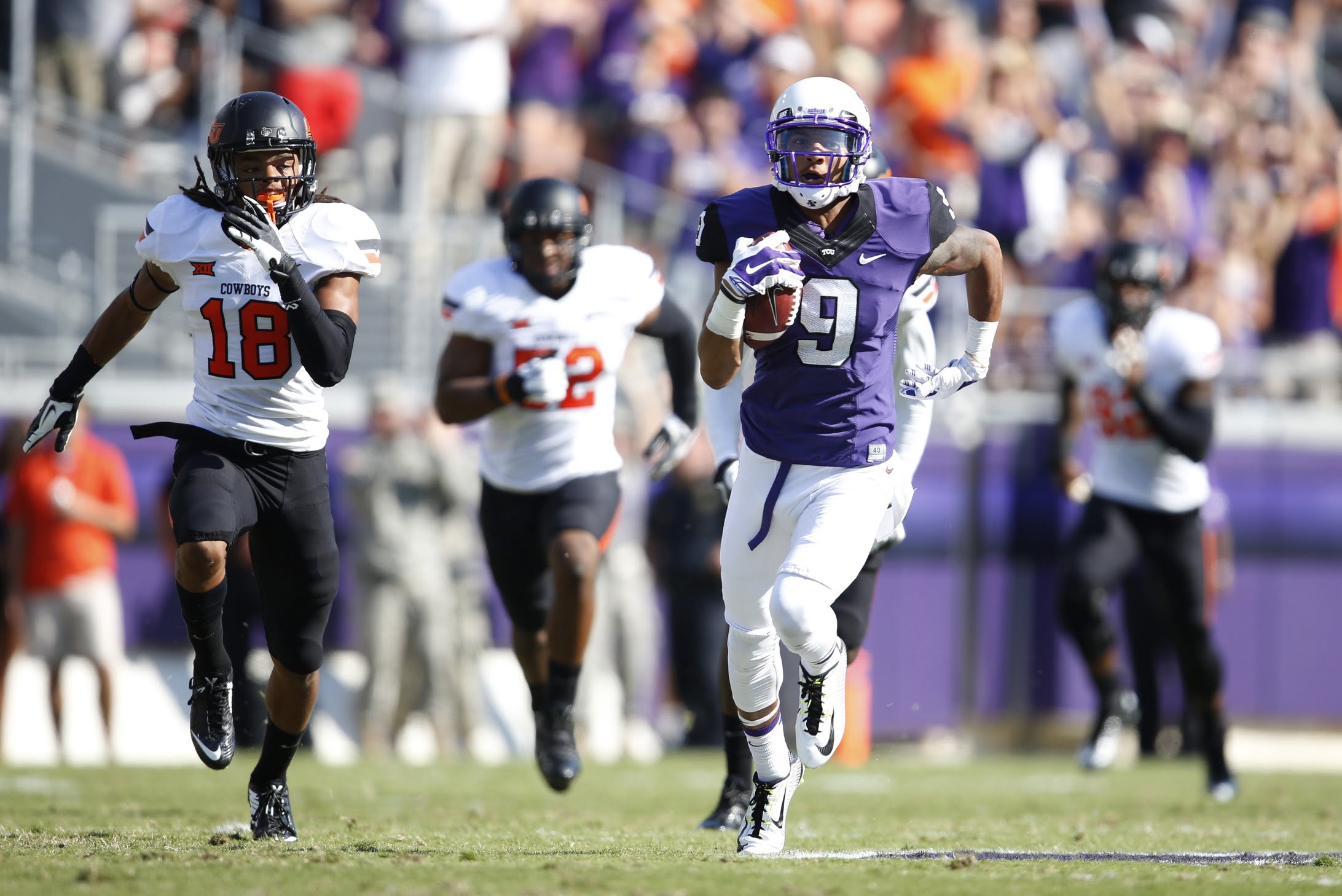 Finished off my 10 Thoughts here but I still had some stuff leftover for the notebook. Not much of it is positive but I tried to at least make it entertaining.

• I can’t keep up with whether Daxx slings it or spins it more often. It’s always one or the other. Rarely does he just “throw” it.

• Be proud, Nike. That was an elite uni matchup. OSU’s B-W-B is as good a combo as it has and those TCU helmets were top shelf.

• One of my favorite things about Tyreek is how he runs through the end of plays. He’ll run 20 yards after the end of a play. I’m not sure if it’s because he can’t slow down or because he just likes to run but I like it.

• TCU’s defensive line is a monster and its safeties are weak so we start the game with seven runs in eight plays? Not sure if serious, Mikes…?

• Ben Grogan is the least questionable aspect of this OSU team right now. Who had that little scenario at the end of August?

• TCU scored 21 points in 81 seconds at one point in the 1st quarter. That seems bad if you’re trying to outscore them.

• Gus called No. 13 “little David Glidden.” I liked that for some reason.

• At one point Charles Davis said Heisman voters “felt betrayed” by Jameis Winston. Still rolling that narrative out there, eh?

• If Boykin was more accurate OSU would have lost by 50. He missed so many dudes running straight up the seam untouched it was absurd.

• I am not a playcaller — on good days I’m barely a decent writer — but how come OSU never runs that twins crossing thing where the inside guy gets it going to the sideline and can usually turn it up for about 5-6 yards? Seems like that used to be a staple.

• Gus mentioned that Gary Patterson said he could pick up some patterns regarding where OSU lined up Tyreek. I think Gary Patterson might be a better coach than Mike Yurcich.

• Speaking of Gus, I’m bummed we never gave him a chance to get the vocal chords cranking. For old time’s sake:

• Poor Ramon Richards. He became a personal favorite after OKC Dave and I were introduced to him at the Texas Tech game and we exchanged some pretty somber texts in the middle of the third quarter.

• Roland dancing in the backfield is about as desirable as, well, me dancing at all. Tyreek can dance whenever his legs well please but Roland should never not be running downhill and he rarely gets a chance with this offensive line.

• I didn’t love not going for it on 4th down at midefield in the 2nd quarter. Uhh..not that it would have mattered.

• The worst loss of the Gundy Era was by 39 to A&M in 2005. It’s not because Meacham wasn’t trying that we didn’t get there on Saturday…

• Sometimes it’s almost like Yurcich finds a play that works and keeps going to it. Like a 12-year-old playing Madden. I know that’s not actually the case but that’s what it feels like from watching.

Needed Castleman back there for that INT.

Obama's approval rate is currently 20x higher than any offensive coordinator in the state of Oklahoma.

I just yelled to Doug Meachem to "Come back to us" while point at my OSU shirt.. He smiled and shook his head no… (This is my nightmare)

#OKstate now has freshman Brad Lundblade in at center. He's a walk-on.

You hired someone from Shippensburg instead of me. Sure, I'll go for it on 4th down up 33 in the 4th. pic.twitter.com/HzK1aEnFGL

• Is this bad? Asking for a friend.

#OKState has now gone four quarters without an offensive touchdown.

• What a pick here. Better hands than half our receivers this season!