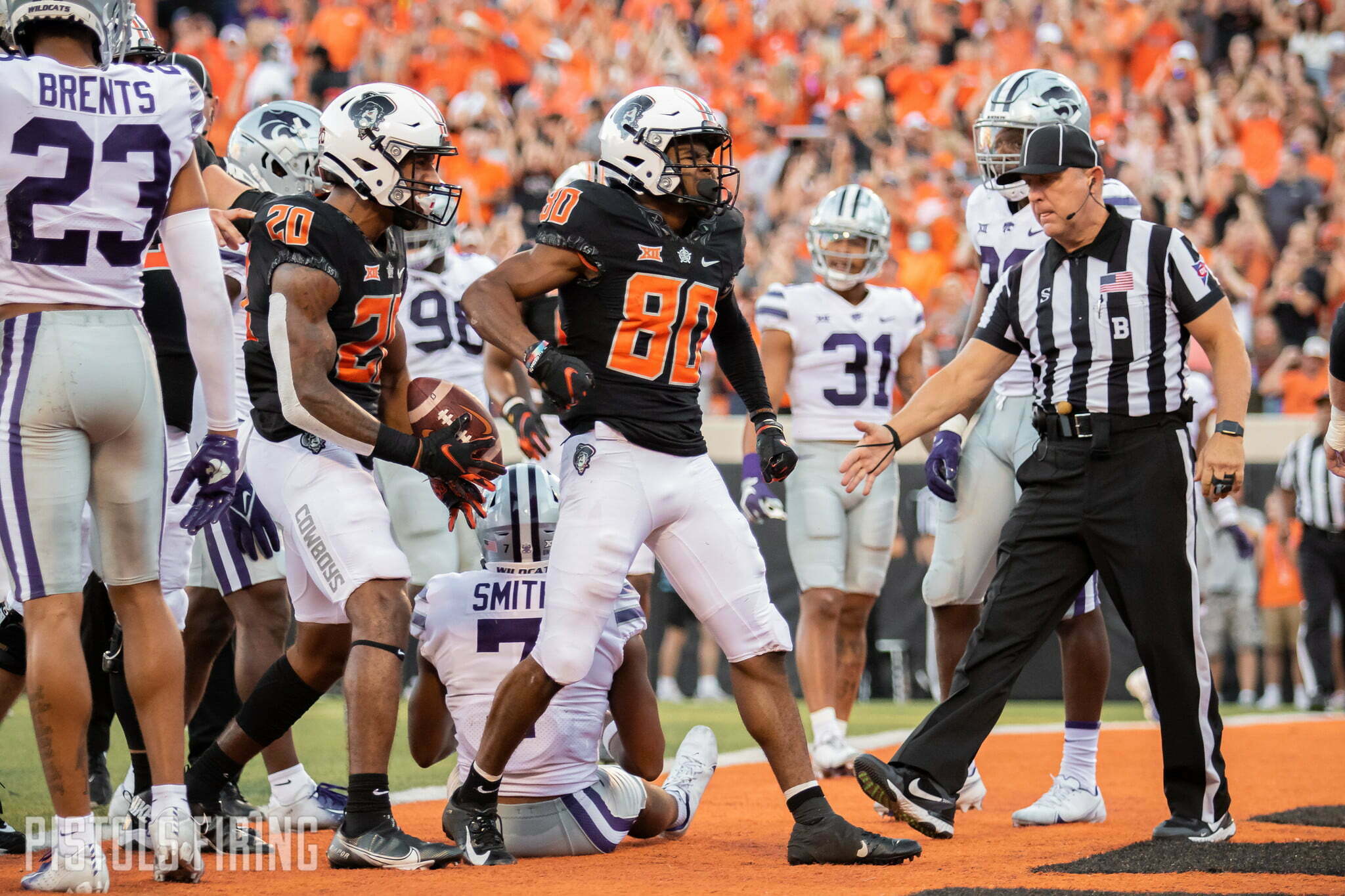 Oklahoma State begins the third quarter of its 2022 football slate with a trip from preseason darling Texas before travelling to visit Kansas State and the other Big 12 team that won in Austin last season.

Be sure to check out Part 1 and Part 2 of our football schedule preview.

While the overall series has been lopsided, the 2010s and 20s have gone mostly the Cowboys’ way. OSU is 8-3 over Texas since 2010. The Cowboys rallied in Austin last season to defeat the Longhorns 32-24 thanks to a first-half Jason Taylor pick-six and the Pokes scoring the final 19 points.

Once more, the Longhorns were ranked in the Top 25 in the preseason poll and picked to finish ahead of OSU in the Big 12. They managed a paltry 3-6 league finish, tying with Texas Tech and TCU. Only Kansas won fewer conference games. The Jayhawks lone league win came in Austin.

The Longhorns have position battles that need to play out all over the roster, most notably at quarterback. Casey Thompson is gone but back is last year’s rookie Hudson Card who will compete with Ohio State transfer Quinn Ewers and incoming four-star passer Maalik Murphy.

The Horns were able to put up some points on the Big 12’s bottom feeders (and OU), but they weren’t particular good in any one area. In fact, they landed in the bottom half of the league in practically every statistical category other than scoring. If they want to live up to their preseason hype this year, there will be some big steps Texas needs to take. But Texas always has talent.

Thought on UT: Give me the Cowboys to continue winning. Texas might be better this year, but the Horns have to prove it to me.

The Cowboys have added to their series lead over the Wildcats of late, winning the last three meetings and five of the last seven.

KSU in 2021: The Wildcats have rode a rollercoaster so far during Chris Klieman’s tenure, bookending two 8-5 seasons around a 4-6 finish in Year 2. Will the Cats continue on upward trajectory or fall back below .500?

KSU in 2022: The Wildcats have reason for hope in 2022 with the addition of the dynamic and seasoned Nebraska transfer Adrian Martinez, a dual-threat QB. But the Cats lost a up front on offense and lot from the back end of their defense.

Thought on KSU: A K-State QB with wheels is cause for trepidation.

The Cowboys have won 12-straight over the Jayhawks with the last two wins being by an average of 46 points.

KU in 2021: Lance Leipold found out he’s not in Buffalo anymore. Wait, that’s not how it goes.

The former Buffalo head coach went just 2-10 in his first year in Lawrence, but that’s slightly above the 1.5 wins David Beaty and Les Miles averaged per year in their tenures combined. KU played Oklahoma tough, beat Texas and lost by less than a touchdown to TCU and West Virginia.

KU in 2022: One of the few bright spots was Jayhawks QB Jalon Daniels. After his fellow QBs combined for zero passing scores and three picks in Stillwater, the sophomore was handed the reins. In KU’s final four games he completed 70 percent of his passes, averaged over 200 yards passing and threw seven TDs to three picks. The Jayhawks will need him to take the next step as a junior.

Thought on KU: The Jayhawks get Texas at home this year. Two in a row?