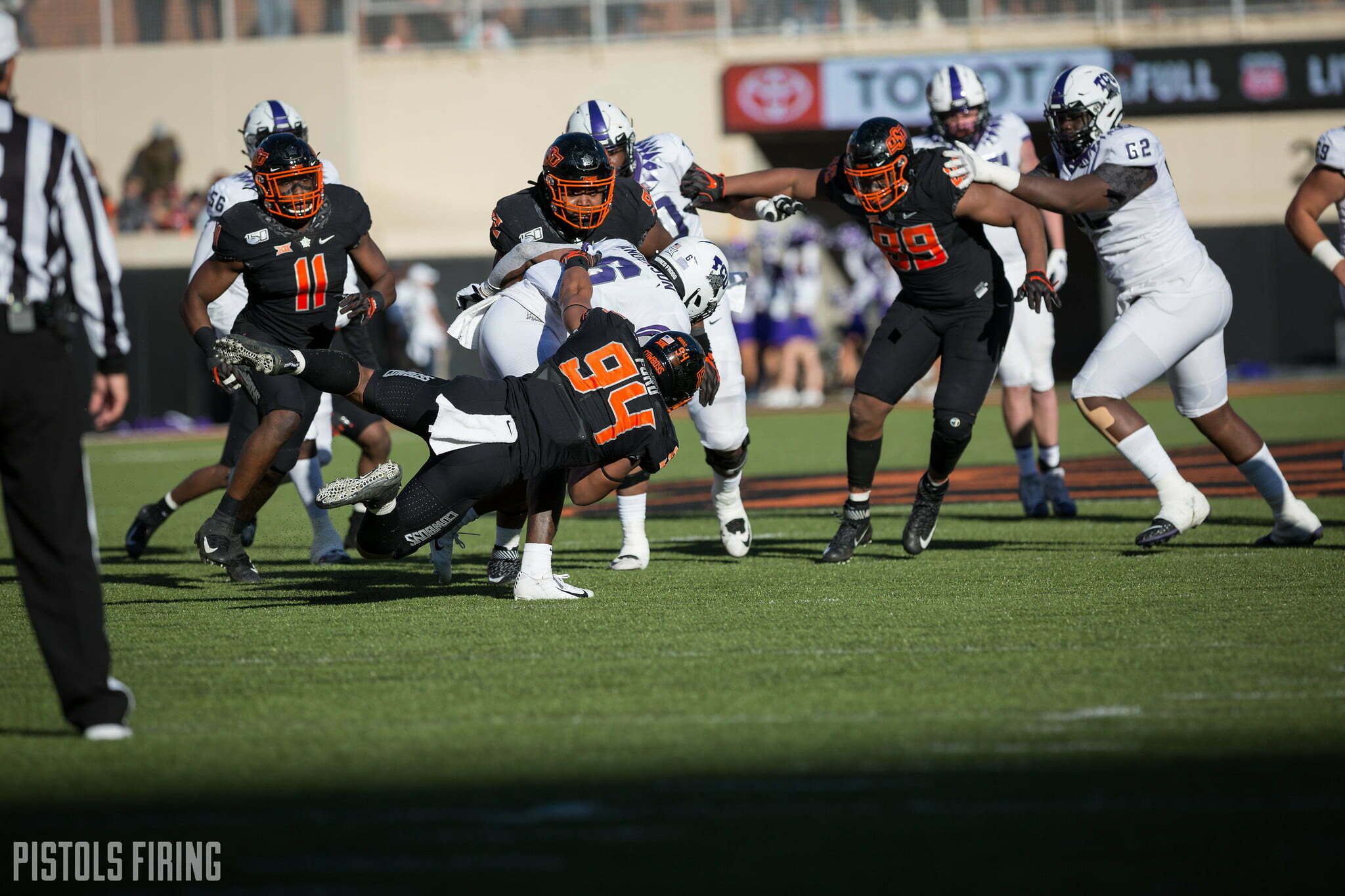 Last week, I discussed my key takeaways from Oklahoma State’s most recent win over the TCU Horned Frogs. All season I’ve been mainly focused on the offense. With a new offensive coordinator, a redshirt freshman quarterback and a possible Heisman finalist at running back, they are an intriguing group to write about. However, I’ve neglected the defensive side of the ball, which has been impressive so far this season and continued that trend recently against TCU.

Jim Knowles and the Cowboy defense held the Horned Frogs to just 27 points two weekends ago. This was over a touchdown below their season scoring average of 34.2 coming into their matchup with the Pokes. For this week’s post, I’ll take a look at my key takeaways from the OSU defense against Gary Patterson’s TCU squad.

One of the main things we all knew about Knowles as he came to Stillwater from Duke is that he liked to bring the heat, which is something I will get to later in this post. However, with the Cowboys primarily basing out of a three defensive lineman front this year, we’ve seen the former Blue Devil DC find success rushing three and dropping eight into coverage.

One particular coverage we’ve seen him incorporate this season is Tampa 2. In a typical Tampa 2 scheme, there are four down lineman and three linebackers.  It resembles Cover 2 Zone, shown in the first image below, but the primary difference is the middle linebacker drops back to cover the deep middle third of the field, shown in the second image. 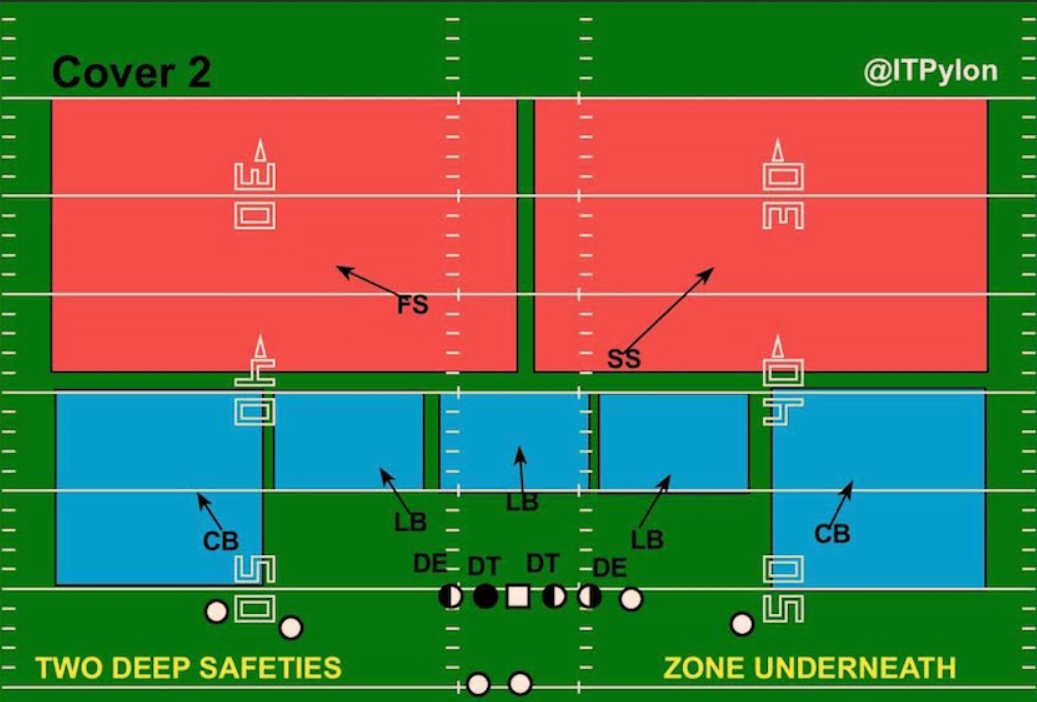 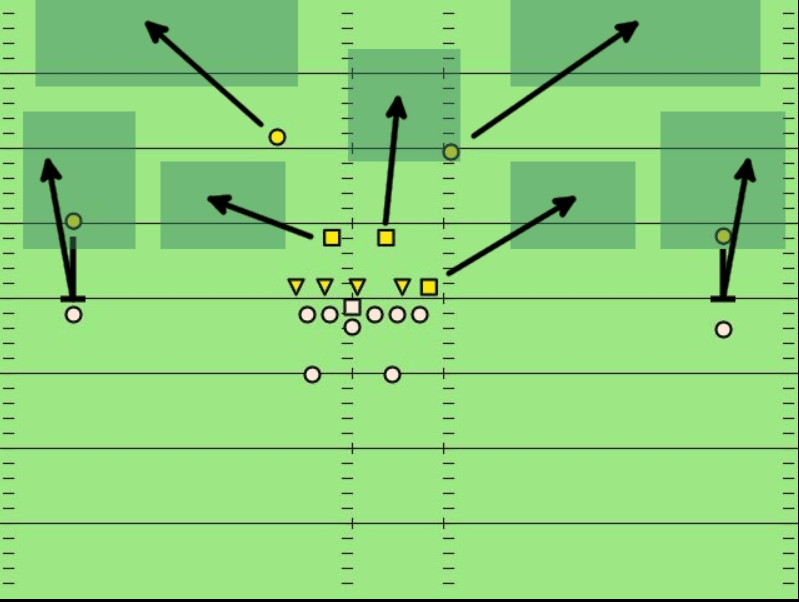 You can see in Cover 2 zone, the middle linebacker is playing a more shallow zone and can come up quickly for run support. By implementing this coverage, the defense has a weakness in the deep middle of the field, the Tampa 2 corrects this weakness.

Here’s a video from SicEm365 which shows an example of OSU utilizing this coverage against Texas earlier this season.

As you can see, as opposed to the middle linebacker, OSU is actually using an additional defensive back to fill this role. In the game against TCU, the Cowboys added another wrinkle by lining up in a pre-snap look that showed blitz.

This look can be extremely confusing for a quarterback to read prior to the snap. The Pokes could be blitzing, they could be playing man, and it’s difficult to tell what the safety in the middle of the field is going to do.

After the snap, you can see that the Kolby Harvell-Peel, the middle of the field safety, is in the “Robber” role and Brock Martin, the middle-of-the-field linebacker, is playing a shallow zone. Playing Tampa 2 with the extra DB as opposed to the MLB is beneficial because the DB is able to get a better look at the entire field pre-snap, and can take a better angle on the ball as compared to a linebacker moving backward into the deep middle third.

It’s also an advantage having a guy like Harvell-Peel at this safety spot because of his ability to break downhill on routes like this.

The “Leo” role in Knowles’ defense is a defensive end/linebacker position, which former Cowboy Jordan Brailford played to near perfection. This year, true freshman Trace Ford has been tasked with this job, and has fared pretty well himself. Against TCU, Knowles was moving Ford all over the place, and had him not only rushing the quarterback, but dropping into coverage. They also used him as “Spy” on TCU QB Max Duggan.

I wrote about the different ways Knowles likes to line up the Leo defender earlier this year, and it’s one of my favorite things to watch about this OSU defense. They had him standing up in between the defensive linemen, as you can see below. 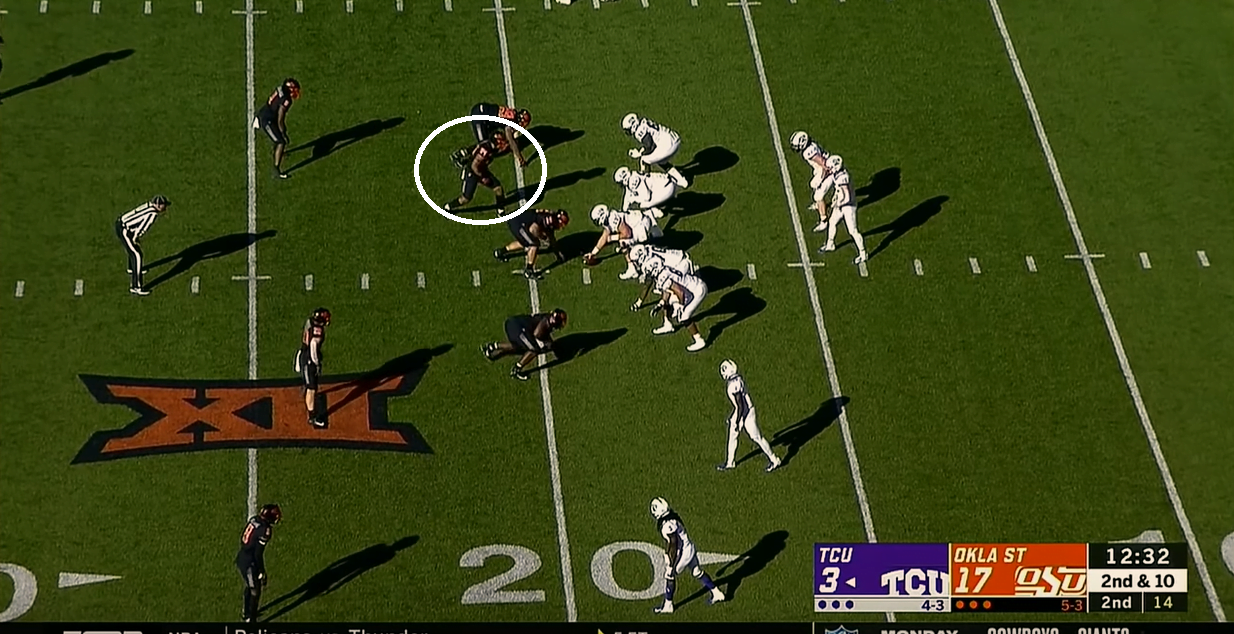 As well as with a wide split off the edge. 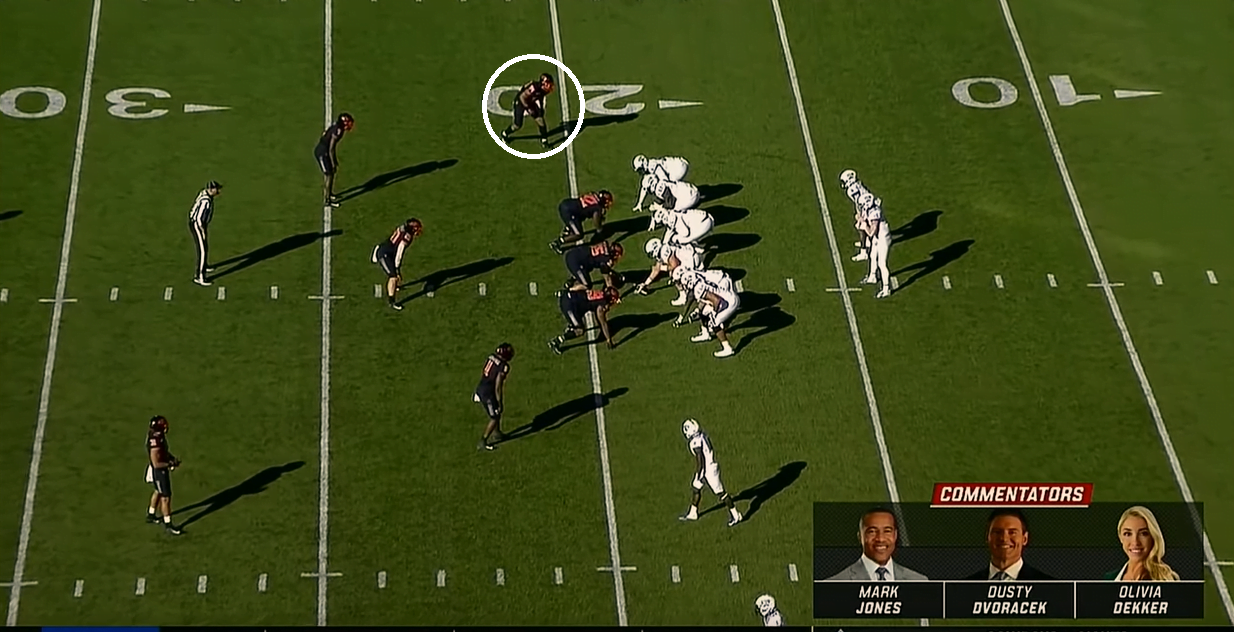 In addition, the athletic young defender showed his versatility by lining up over TCU’s slot receivers several times throughout the game. 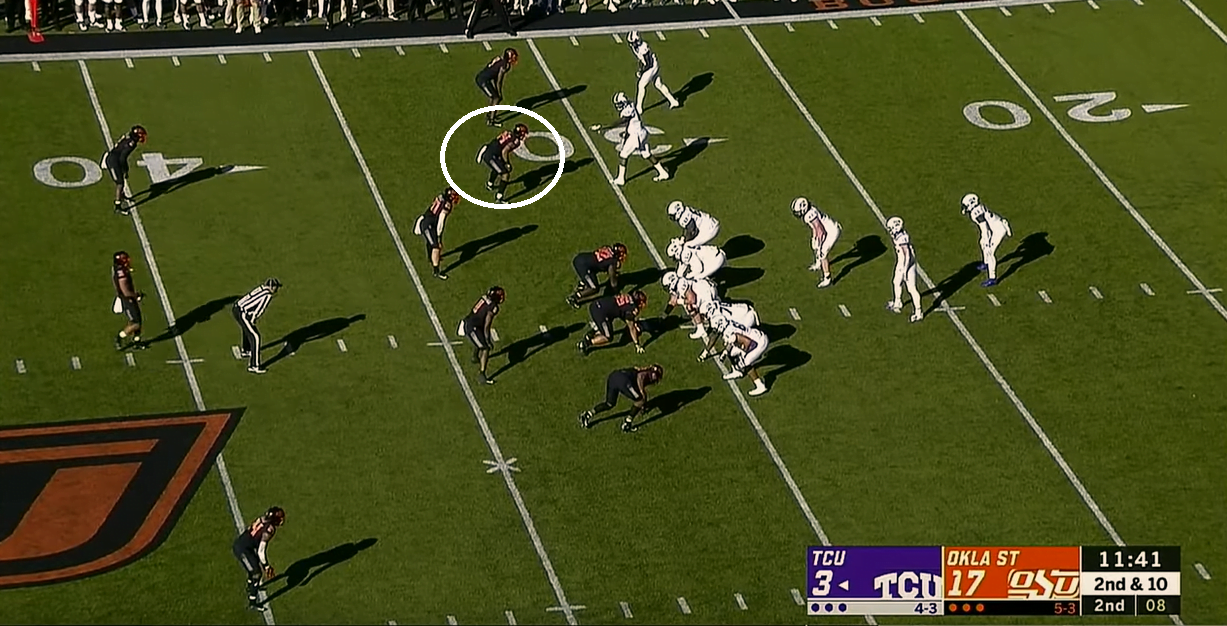 Lastly, Knowles played him at the middle linebacker spot. 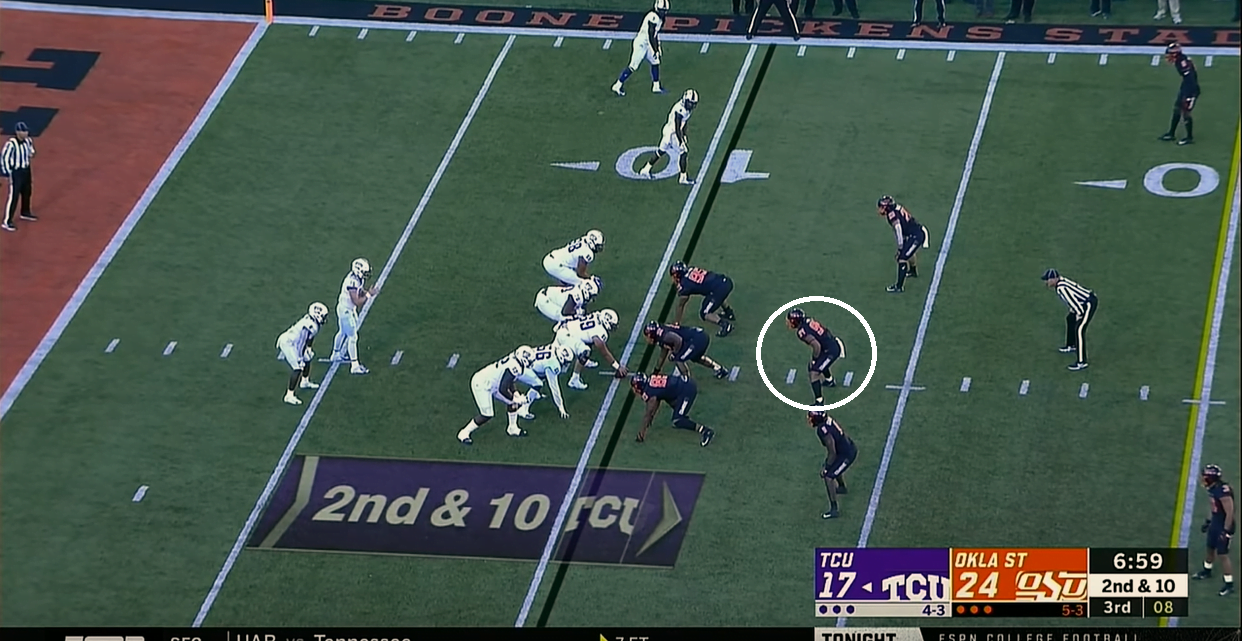 Moving the Leo to a linebacker position, as opposed to a stand-up defensive end, allows him to be more free-flowing in the run game and gives him the ability to move easily and drop back into coverage.

Ford’s solid play and steady improvement throughout the year is very promising. He is the perfect player for this role in Knowles’ defense, and I’m excited to continue watching him throughout his tenure as a Cowboy.

The Tape Doesn’t Lie Podcast guys mentioned it in their show last week, but the Pokes found a lot of success by bringing pressure from multiple defenders against the Horned Frogs. OSU finished with five sacks on the day, and made Duggan extremely uncomfortable at times.

In this first clip below, you see the Cowboys in their base three defensive lineman front. Ford is in an “overhang” position, with two linebackers in the middle of the field. Before the snap, Ford starts to creep toward the line of scrimmage, while Harvell-Peel moves down toward the line from his safety spot on the opposite side of the field.

After the snap, the TCU tight end releases on a pass route, leaving six blockers to contain seven OSU defenders. With solid coverage from the Cowboy defensive backs, the play results in a sack.

Next, you see Oklahoma State bring seven defenders again on the blitz. It’s a similar action to the play above, only this time, it’s Martin in Ford’s spot.

Malcolm Rodriguez sees his opportunity as the running back stays in to block with Duggan already in trouble, and comes on the delayed blitz and makes the sack. This time TCU began the play with only six blockers, and with Rodriguez getting in on the pressure, the Pokes outnumbered the Horned Frogs again.

It was a good overall game plan from Knowles and the Cowboys executed it very well.