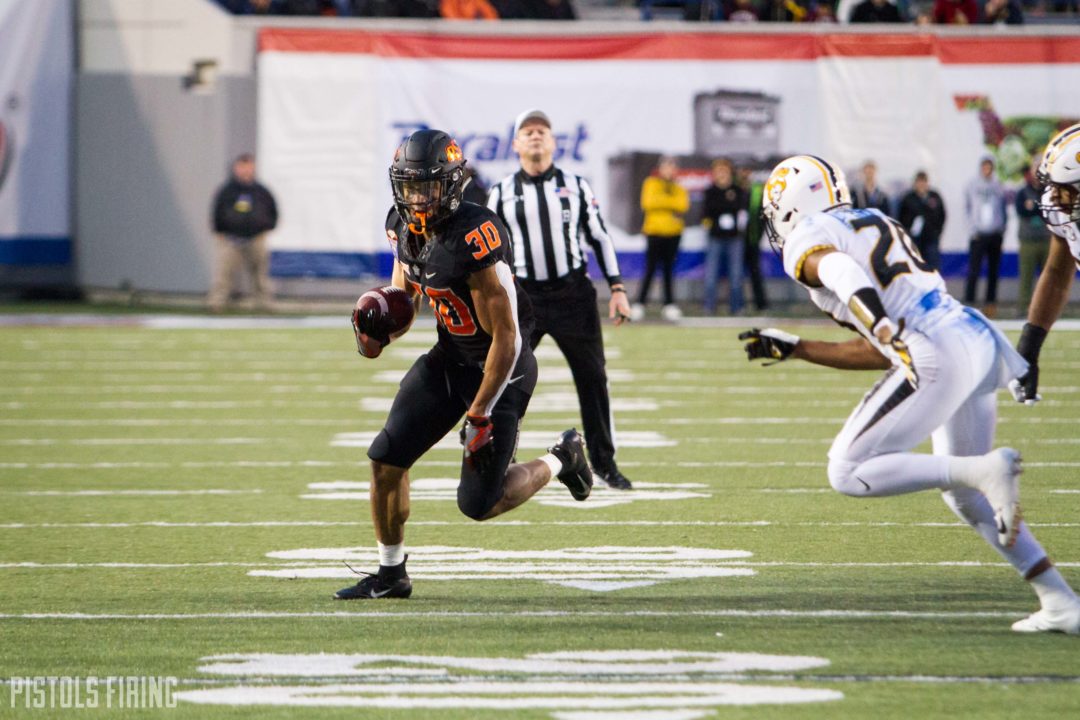 For my final offensive takeaways post of the season, I’ll be looking at Oklahoma State’s 38-33 victory over the Missouri Tigers on New Year’s Eve. I’m going to cover three key things I saw from the Cowboy offense which helped lead them to a victory over the top 25-ranked Tigers.

Underneath Passing Game in the First Half

Something I discussed in my offensive keys to the game piece from last week was that Mizzou has had some issues with inside receivers and tight ends on underneath routes this season. It was a major issue for them in their narrow victory over Purdue, as the Boilermakers racked up 572 yards through they air.

Purdue slot receiver Rondale Moore recorded 137 yards and one touchdown, and he caused issues for the Tiger secondary pretty much all game long, as shown in the clip below.

The Pokes decided to take advantage of this in the first half as Cowboy inside receiver Dillon Stoner recorded 5 of his 6 total catches on the day during the first two quarters, including this touchdown below.

The coverages that Missouri used are different in both the clips above, but you can see each time the Tigers blitzed and ended up getting burned for big gains. The pick from the official is always nice as well.

Along with Stoner, OSU inside receiver Landon Wolf made two of his three total receptions in the first half, like this one to pick up the first down.

Even when Taylor Cornelius threw the ball to his big play receivers like Tylan Wallace in the first half, it seemed to mostly be on shorter routes. In the following clip you see the Cowboys using tempo as TC gets the ball out quickly to Wallace on the curl to move the chains.

Even though Oklahoma State went to the locker room down 16-14 at the half, they were able to complete 13 passes for 137 yards and two touchdowns, and I really liked the approach to the passing game from Mike Yurcich.

Airing It Out in the Second Half to Tyron and Tylan

The Cowboys came out in the third quarter and put up 21 points to build a nice lead over the Tigers. One way they did this was throwing the ball down the field and hitting on some big plays. They were able to open things up down field by setting the Tigers up with the underneath passing attack in first two quarters of this contest. This was a nice adjustment in the game plan from Mikey Y and it was executed extremely well in the third quarter by TC and company.

With Mizzou having to be more aware of the underneath routes, especially after getting beat by Stoner early on, the Pokes were able to find some openings over the top. A perfect example is this touchdown throw by Cornelius to Tyron Johnson.

Johnson had just made a spectacular catch on a deep pass the play before, and this time TC makes a nice throw on the run to hit Johnson who had gotten behind the Tiger secondary.

Next we see Tylan Wallace get matched up one-on-one on the outside with a Mizzou defensive back. That’s an OSU advantage against pretty much anyone in the country, and Cornelius is able to hit him down field for a big gain.

Getting Johnson and Wallace more involved in the third quarter was huge for this Cowboy offense and was a great halftime adjustment made by the coaching staff. Johnson had 83 of this 141 yards in third, while Wallace had 51 of his 83 in the quarter.

With the Cowboys able to find fairly consistent success throwing the football through the first three quarters, things finally started opening up in the ground game… and Chuba Hubbard took full advantage. He rushed for 114 of his 145 total yards in the second half and showed off the multitude of skills his possesses as a running back.

The speedy Canadian showed off his ability to pick up yards after initial contact.

In addition, he displayed his lateral quickness and flat-out speed once he gets around the end.

Throughout the season, Hubbard has shown that he is a complete running back. He possesses the strength and physicality to run inside, along with the speed to get around the edge.

Hubbard also has given consistent effort in pass protection, which he will improve upon over time, and has showcased his skills as a receiving threat as well.  Whether it’s splitting out wide or catching the ball out of the backfield, as you see below, his talent as a receiver will be huge for OSU next season and beyond.

I may get a little carried away with my Chuba takes in the PFB Slack chat, but from what I’ve seen this season I think this is a guy Oklahoma State can build their offense around in the future.

Obviously you have guys like Tylan Wallace, Tyron Johnson, Dillon Stoner, Jelani Woods, etc., so that wouldn’t really be a necessity for the Pokes, but I believe Hubbard is capable of handling that type of workload while being very productive. I’m really excited for his future in Stillwater and can’t wait to see how he grows and improves as the Cowboys’ number one option at running back.

Overall, I thought the OSU offense had a solid outing on New Year’s Eve. Yurcich did a great job of mixing in tempo to catch the Mizzou defense off guard and I thought it was a nice all around gameplan. There were some bad decisions from Cornelius at times, but he also threw for 336 yards and four touchdowns and made several incredible throws. The OSU offensive line had a few lapses, but again, I thought they played well enough to come out with the W, and they did just that.