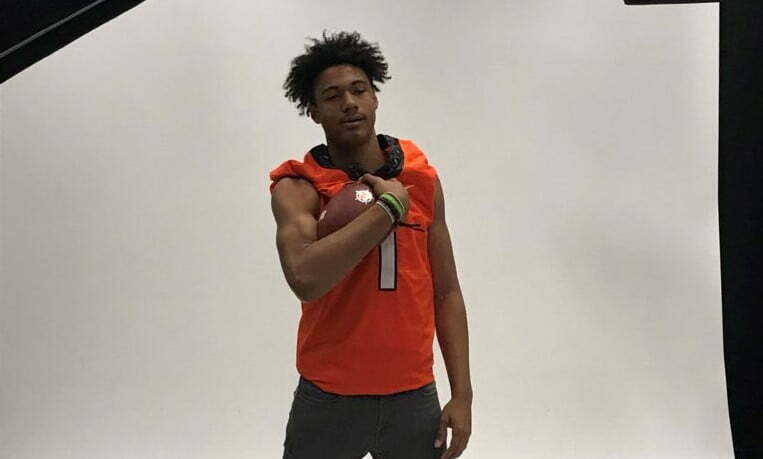 Next up in the 2021 recruiting class film study series, I take a look at the second highest rated player in the class, four-star wide receiver Bryson Green. Before we take a look at the Texas wideout, you can find my previous breakdowns in this series below:

The Allen High School product had offers from Auburn, Baylor, Colorado, Duke, Michigan State, Minnesota, Mississippi State, Nebraska, North Carolina, Ole Miss, TCU, Texas Tech, Utah, Virginia Tech, Washington and Washington State before committing and then ultimately signing with Oklahoma State. In addition, his twin brother and fellow former Allen wideout Blaine Green is also a part of OSU’s 2021 class. The Green twins aren’t the first in their family to make it to the Power Five level either, as their brother Seth Green currently plays for Minnesota, which is also where their father Bryan spent his college playing days.

Bryson Green excelled at both basketball and football for the Allen Eagles. On the football field, he helped his team achieve a 10-1 record and reach the third round of the 6A-D1 Texas High School Football Playoffs last season. Additionally, he was named to the District 9-6A First-Team Offense, received all-district academic honors and received a DFW Inside High School Sports MVP Bobblehead, which might be my favorite award I’ve seen so far.

The talented young receiver had more than 500 yards receiving last year, and has been a productive player for Allen since his sophomore season. Green’s junior year was cut short because of an injury, and he was banged up a little bit last season, including having to miss Allen’s playoff game against South Grand Prairie with an apparent shoulder injury.

I was able to watch Allen’s regular season matchups with Denton Guyer (11-3) and Braswell (5-5), along with the Eagles’ playoff game against Trinity (11-2). Below I’ll breakdown some of the key areas for wide receivers and how Green stacks up in each one.

Green had a fairly diverse route tree in the film I watched. The Allen coaching staff utilized him in the screen game, in the intermediate passing game and as a deep threat. In addition, he did a great job using his 6-foot-2, 210-pound frame to box out defensive backs on chain moving, third down situations.

Green’s foot quickness, the angles he takes and the way he uses his hands allow him to create decent separation in the short to intermediate passing game, as you see with the nice route in the Braswell game below.

He’s also a smart wide receiver and does an excellent job of recognizing when to break on his route to get the defensive back to open his hips and lose a step. In the next clip, Green shows off the double move to get by the defender.

Green also was consistently able to find holes in the defense to get open for his quarterback, as you’ll see an example of in the next video.

However, there still is some room for improvement in his overall footwork in regards to route running. Green will need to continue to perfect his craft as a route technician. Although he has some speed clocking in a 4.70 40-yard dash, it’s not elite, top-end speed, and I think he will need to rely on other skills to create separation at the college level.

In the games I watched, Green faced a variety of both press and off coverage. In addition, Allen lined him up all over the field. He played on the outside and in the slot, and he did well in both roles. Green already has a nice set of head fakes and jab steps, and he also does a solid job of varying his timing and speed to cleanly evade defensive backs off the line. He shows off his quick feet on this play against Braswell.

Against press coverage, he’s not afraid to get physical and normally did well to use his length to keep the defender from getting into his body off the snap. Against zone, off coverage, Green was an absolute monster. As I mentioned above, he is a master at positioning his body to shield the DB from the football, as displayed in the clip below.

In regards to improvement at the next level, I believe Green will need to continue working on gaining vertical ground on his opponent after his initial moves off the line. He does well off the snap, but he would sometimes allow the defender to recover by not pressing hard up field on his routes. As he continues to build speed and work on his overall footwork, I don’t think this will be an issue because Green is a smart player and should easily be able to improve in this area.

The Allen product has strong hands and does a nice job of catching the ball away from his body. There were several instances in which Green hauled in inaccurate throws above his head or outside of his frame with seemingly little effort. Green was targeted a lot in goal-line situations, and there were plenty of examples of his contested catch ability, like the one in the following video.

He does a good job of attacking the ball at its highest point and securing it through contact. It also helps having a 36.6-inch vertical jump.

In an interview with Heartland College Sports Green talked about his mentality when it comes to catching the football.

“I like to model my game after Davonte Adams,” he said. “I want to be the aggressor, and I want to just take the ball. Blaine and I both have that mentality, but if the ball’s in the air, it’s ours.”

And, he showed on film that he’s a man of his word and made some highlight reel catches like this one.

Additionally, he was not afraid of making catches across the middle in traffic and never short armed the ball when he saw contact coming. I did see a few drops on film, but they normally weren’t the best thrown balls, so I won’t hold that against Green too much.

Because of Green’s size and strength, he is tough to bring down in the open field after the catch. As I discussed previously, he doesn’t quite have the blazing speed to blow by defenders after he makes the grab, but he has decent agility and regularly made the first guy miss at the high school level. Green was utilized quite a bit in the screen game, and though he didn’t break any big ones in the film I watched, he was rarely stopped for a short gain.

He also showed some skills in the kick return game, as you’ll see below.

Both of the Green twins are excellent blockers. They were frequently lined up on the same side of the field, and Allen would then run the ball to the perimeter on that side and use the twins as lead blockers. Green has the size and strength already to excel as a blocker in Stillwater. In addition, something that you don’t see from a lot of guys his age is the aggression and willingness he has to be a force in this area of the game. See an example below of his blocking ability.

Green has no issues being asked to block linebackers and takes good angles no matter who he is asked to block. Once he gets his hands on the defender, you can pretty much count that guy out on being able to make a play on the ball carrier. He, along with his brother, may be two of the best blocking wide receivers I’ve seen in any of the recent OSU recruiting classes.

Overall, I was really impressed with Green’s film. I can see why he is highly rated on most recruiting sites, and I think he’s going to be a really solid player for the Cowboys. I also believe he has the size to come in and play right away for offensive coordinator Kasey Dunn’s offense.