Saturday’s game against TCU is one we would all rather forget. Up until this point, the defense appeared to be the bright spot on a team that wasn’t realistically expected to compete for a Big 12 championship.

However, after Saturday, it seems there might be just as much concern about the defense as there is about the offense.

The youth of this defense is finally starting to reveal itself. The players are playing hard; it’s just that this unit is still figuring things out. They’ve only played seven games together, after all. And it doesn’t help that OSU is now starting to play the really good teams on its schedule, most of which have all-conference caliber QBs.

With all that being said, this defense still has playmakers and going through these hellacious next five games will only make every player better in the long run.

Much like QBs take time to evolve (Trevone Boykin, Clint Trickett, Jake Waters), so, too, do defenses.

It’s hard to find a silver lining in a blowout loss, but OSU has one in Emmanuel Ogbah. Ogbah recorded a couple of sacks on Saturday that were pretty impressive, but there’s one worth taking a look at.

There’s really not a whole lot of analysis to make on this play because the play never even had a fair chance to be executed/defended before Ogbah ended it.

OSU was lined up in its base 4-3 defense.

TCU is in a pistol formation with the fullback (FB) to the left of Boykin, the halfback (HB) directly behind Boykin, and three wide receivers lined up outside.

The ball is snapped and OSU’s d-line shoots off the line and angles left. Often times, a defensive line will angle toward the strong side of the field, as there is a decent chance the play will be on this side of the field.

Because of the angles the defensive line takes, the blocking assignments change for TCU’s offensive line.

The LT helps out the LG in blocking the defensive end, the center picks up Hautau, and the RG goes in between helping the center and helping the RT, who picks up Castleman. 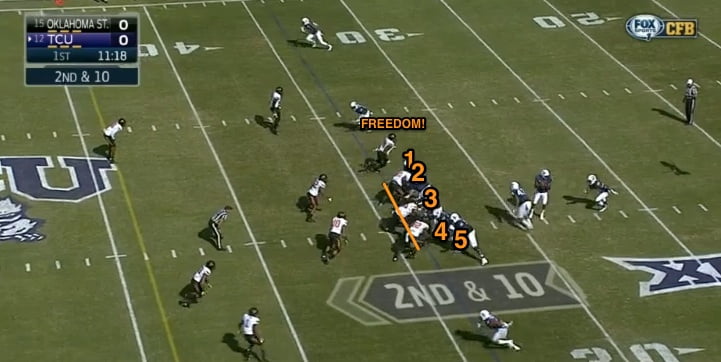 All five TCU linemen are engaged in blocking Wren, Hautau and Castleman. This leaves Ogbah unblocked off the edge.

The FB immediately goes in front of Boykin to pick up Ogbah but ends up being about as successful at this task as you or I would.

Ogbah is too fast off the line and well past the FB by the time Boykin fakes the handoff, turns around and is greeted by the 6-4, 270 lb. monster.

Here it is from another angle:

Why This Play Worked

Ogbah is a freak of an athlete. That’s about it. Most of the time, that FB might be successful in at least getting a piece of the DE, but with Ogbah there’s no chance.

We’ve seen Ogbah overpower opponents and we’ve seen him run right past them. Ogbah is a very talented player, and as good as he is now as a sophomore, it’s hard not to think about the kind of player he’ll be in two years.