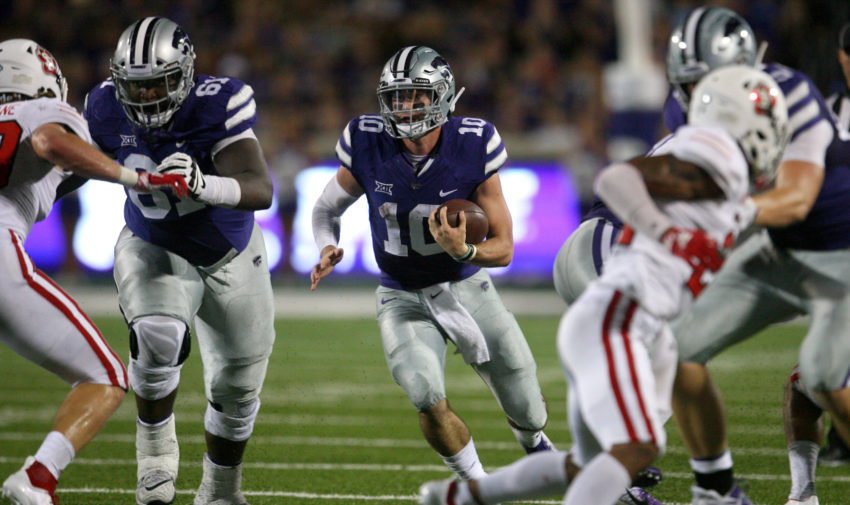 From an outsider’s point of view, Kansas State’s offense might seem like the same old boring chew-the-clock ground-heavy attack it’s been for decades under Bill Snyder. Don’t be mistaken. It is very much all of those things. But the Wildcats run one of the most unique offenses in the country — especially in the age of the spread.

The Kansas State offense is designed to run the ball and win the time-of-possession battle. One of the things that make them unique is how they space their lineman. They will have different sets for the distance between their lineman.

They occasionally space their guard wide from the center: 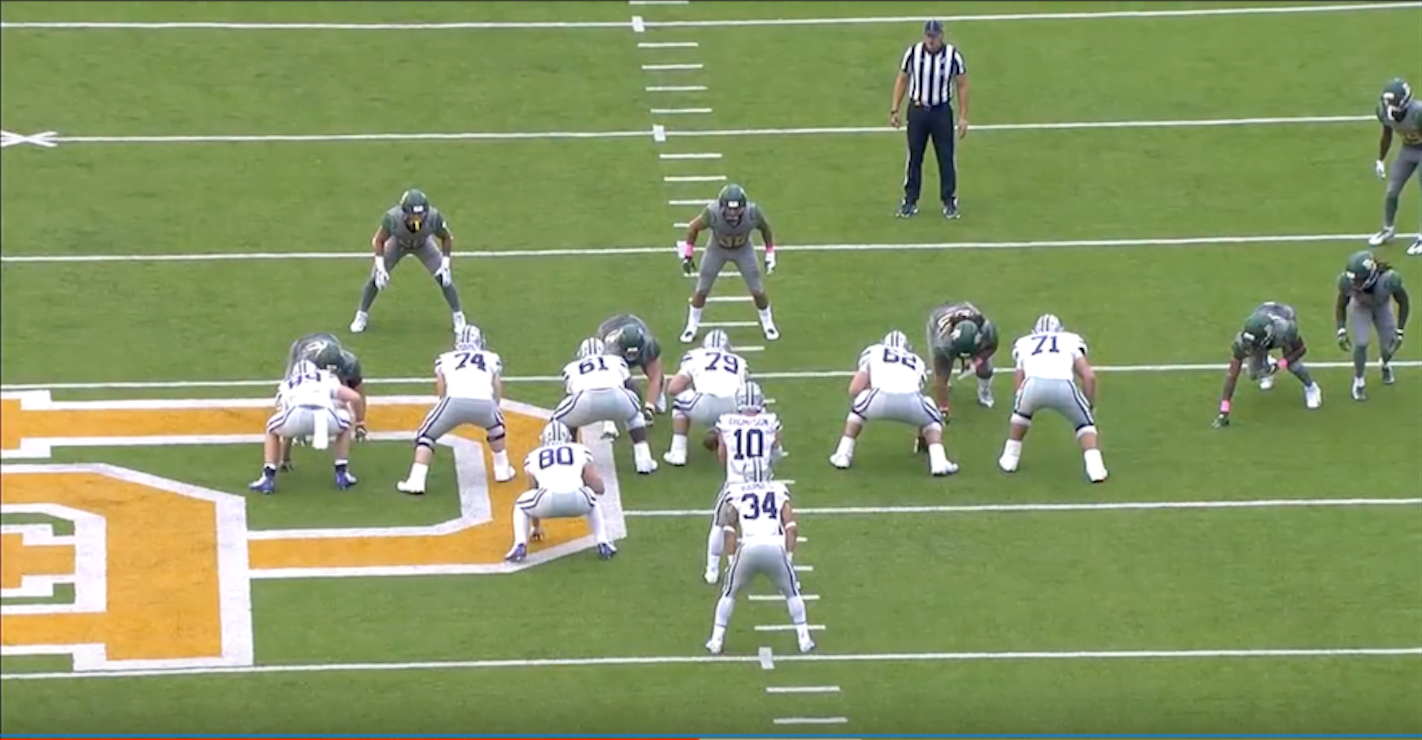 Or do the same with both guards: 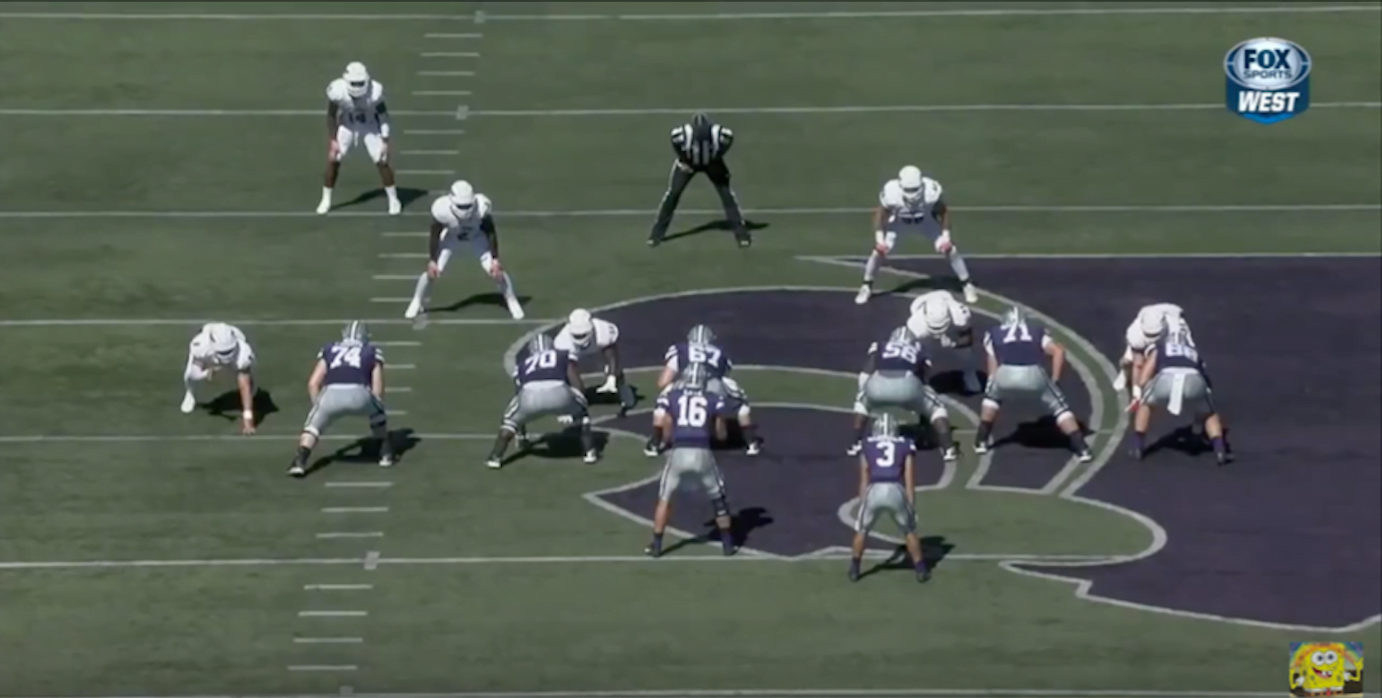 They also move the distance between their guards and tackles:

Noticed an interesting trend w/ Kansas State and found it in Oklahoma as well. Their open side tackle will often have an extra wide split from the rest of the line. On zone, it cleans ups the read as you stretch the DE. On counter, you stretch the DE and create an easier kick out pic.twitter.com/nj9qIPf2yG

In terms of philosophy, there aren’t many teams that resemble the old-school single wing offenses more than Kansas State. They don’t use as much misdirection as the traditional single wing, but they want to get as many blockers at the point of attack as possible.

Take this buck sweep to the weak side of the play, for example. The play-side tackle kicks out while the center and backside tackle pull and fill the gap to block the second level.

That doesn’t mean the Wildcats are strictly a man-blocking scheme offense, though. They still run base zone, like this weakside sift play, and just like the power or buck sweep, it allows the back to use his patience to wait for the hole to open up.

The Wildats use the quarterback in the run game as well. Take this keeper off a play similar to their buck sweep. The line pulls their playside guard and backside tackle and guard. The linebackers flow to the back and Skylar Thompson is able to run to the end zone relatively untouched.

The Wildcats don’t use nearly as much quarterback power, sweep or counter as they have in the past (like the Collin Klein days), but Cowboy fans should still watch out for it, as Kansas State gashed OSU with it early during the two teams’ last meeting in Manhattan.

As aforementioned, the Wildcats want to get as many bodies to the point of attack as possible. Here, they run a buck sweep just as they have in the earlier clips, pulling both guards and wrapping them around the closed side of the formation. But the running back also fills the gap and gets a block on the safety, allowing for an easy touchdown. By using the quarterback as the primary ballcarrier, the offense gains one more blocker to use. The Wildcats do this better than any team in the country.

Kansas State might not achieve balance in terms of run and pass, but they do find balance in how they run the ball — using zone schemes, gap schemes, and different offensive tactics to pound the ball against opposing defenses and control the clock.