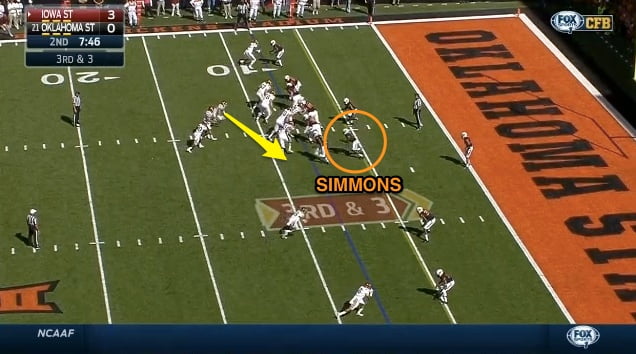 It’s only fitting that Josh Furman has a monster game after I leave him off my list of the top 10 defensive players.

It’s not that I didn’t think he wasn’t a good defender, I just hadn’t seen that breakout performance yet. Well, he had his breakout game and it was fun to watch.

In a game where there wasn’t anything too electrifying from a defensive standpoint, Furman provided a couple of big sacks that warranted recognition.

Furman looks more like a safety than a linebacker, but his role is really as a “star” linebacker, meaning he’s an LB/safety hybrid.

Furman is as physical as any player on the team. We knew that. But up until Saturday I don’t think we’ve gotten a good look at how fast he is. On Saturday, Furman had a couple of golden opportunities to use his speed, and he capitalized.

Let’s look at Furman’s first sack. ISU was in a 4 WR set, with the tailback running a route out of the backfield. The ball is snapped and ISU’s QB drops back. 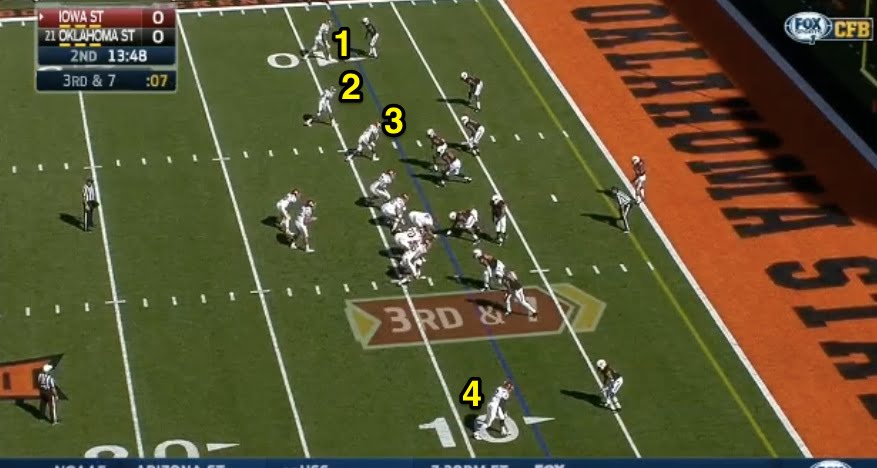 Seth Jacobs hints that he’s going to pass rush, but then drops back into coverage, causing the RG to help out the RT in blocking Jimmy Bean. 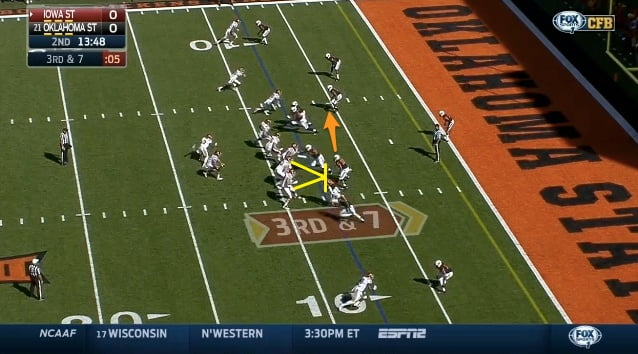 Furman, who is lined up outside of Bean, comes blazing off the edge, unblocked, and makes the punishing hit on the QB. 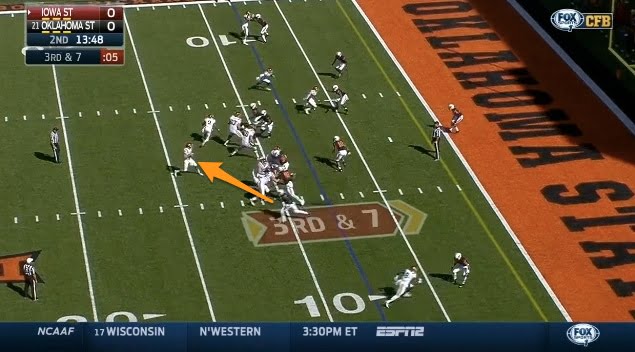 From the time the ball was snapped until the time Furman got to the QB, only 3 seconds had elapsed. That’s fast. The coverage was solid on the play, but even if there were a wide receiver wide open down the field, it wouldn’t have mattered.

Furman was coming in too fast and the QB had no idea he was there until it was too late.

Looking at Furman’s second sack, the setup was a little different. ISU is in a shotgun formation with two tailbacks on either side of the QB. The ball is snapped and the TB to the left of the QB (TB2) goes to block Ryan Simmons.

The QB fakes the handoff to the other TB (TB1) and rolls out to pass. Furman goes after the fake and chases TB1, but realizes he doesn’t have the ball and quickly changes direction to chase after the QB. 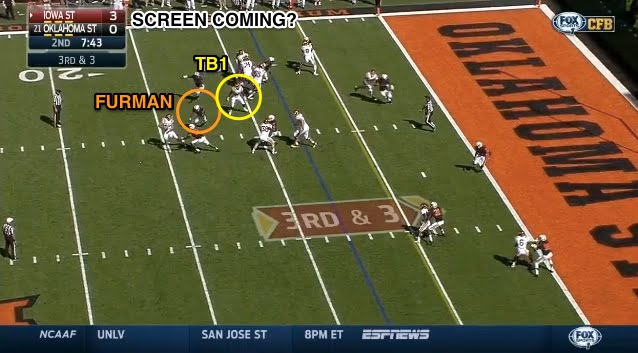 At this point, it seems the play is setting up to be a screen pass intended for TB1, but this falls apart fast.

TB2 whiffs on Ryan Simmons, who does a good job of outside contain. The QB quickly flushes from the pocket and is being pursued by Simmons and Furman.

After avoiding Simmons, the QB realizes his best bet is to take off and run. What happens next is comparable to a lion chasing after its prey. Furman closes in on the QB in no time and comes away with a sack.

A big reason this play worked in OSU’s favor: OSU had Simmons and Furman stacked close together on the left side of the line.

Furman, playing on the line, goes underneath with the flow of the play and Simmons rushes to replace Furman’s initial spot on the line and play the contain. If Simmons doesn’t stay at home, the QB has more time to scramble or find another receiver downfield.

Iowa State’s offense is based heavily off of the zone read. Its goal is to try and stretch the defense out and this sometimes exposes a defense’s weakness, whether it is missing an assignment or slower edge players.

OSU is at the point where speed on defense isn’t an issue. However, a defense as young and inexperienced as OSU’s is capable of missed assignments when defending the zone read, and that’s what ISU was banking on.

All game long, OSU stuck to its assignment and didn’t give up any big run plays. It’s easy to say the front seven had a quiet day, but really, it was about as good a performance as you’d hope for.

I know it’s Iowa State, but if the defense can play this well against the spread option offenses in the remaining games, we’ll have a shot at winning some of those November games, especially if the pass coverage continues to improve, which it seems to be doing.