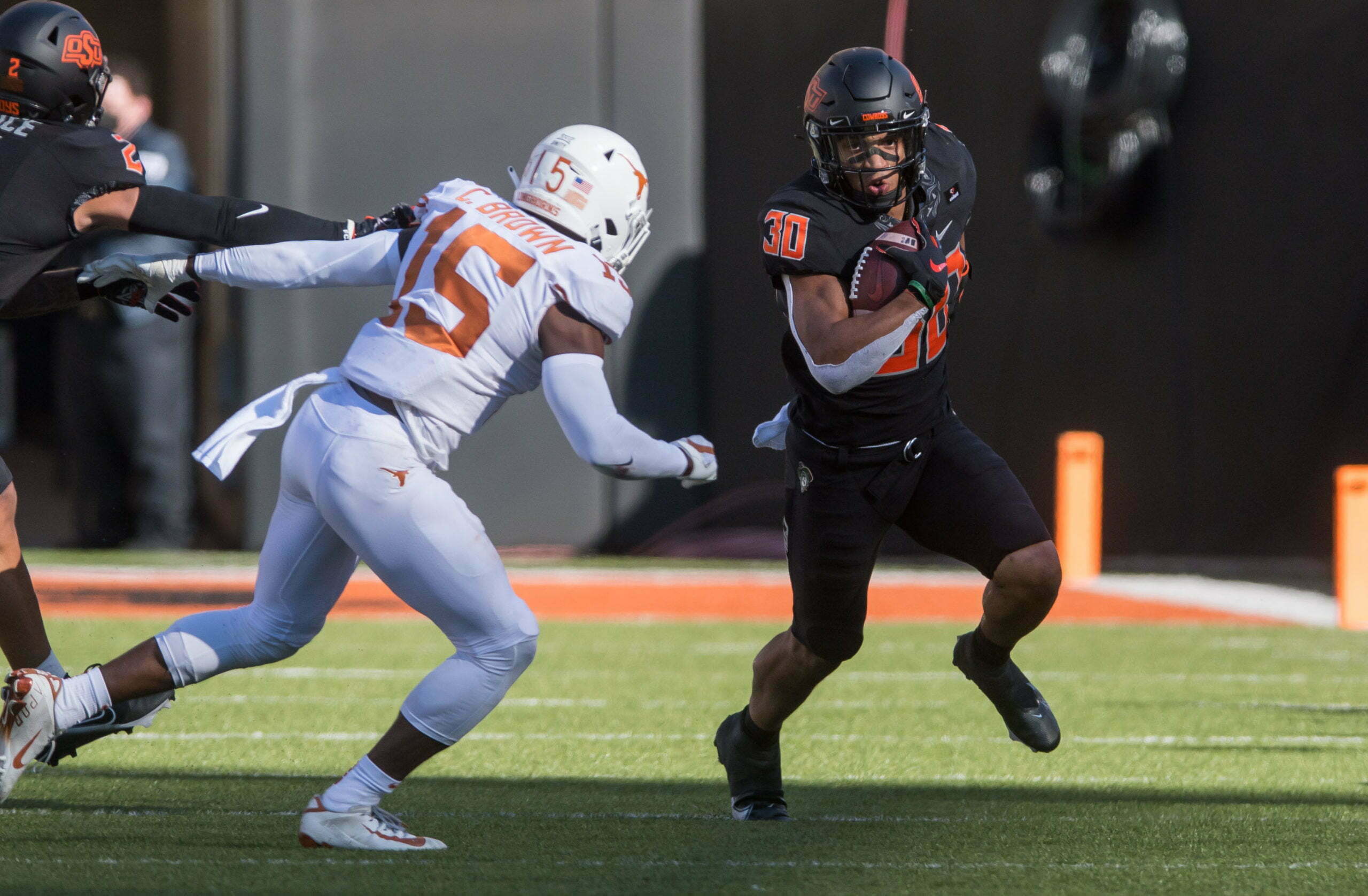 Oklahoma State suffered their first loss of the season this past Saturday, falling 41-34 to the Texas Longhorns in overtime. The Cowboy offense put up some yards, going for 530 on the day, but they turned the ball over four times, which gave the Longhorns too many opportunities to score. On defense, the Pokes had another solid performance, but UT was able to capitalize on good field position and pulled out the upset victory.

Even though OSU lost the game, there were some positive takeaways from offensive coordinator Kasey Dunn and company, and I wanted to dive into those below.

As we’ve seen from the OSU offense this season, there was a Cowboy Back on the field for a majority of the snaps. However, compared to last week’s game against Iowa State where I only counted ~8% of plays without a Cowboy Back, this week we saw ~18% without the fullback/tight end hybrid position on the field.

Dunn went with 20 personnel (two running backs and no Cowboy Back/tight end), split back formations more frequently last weekend than he has in any game so far this year. See the image below for an example.

These two-running back formations put the defensive in some difficult situations. First off, they have to expect a run to either side of the field, as the quarterback can hand off to either back in any direction. The defensive coordinator has to decide whether he will put extra linebackers on the field to stop the run, but risk having a linebacker in coverage on a speedy running back, or going into a nickel or dime package with extra defensive backs and risk being exposed in the running game.

We also saw 20 personnel with one of the running backs split out wide in a stacked wide receiver formation, as shown in the following pic.

When the Cowboys based out of their go-to personnel groupings, 11 (one running back and one Cowboy Back/Tight End) and 12 (one running back and two Cowboy Backs/Tight Ends), we saw some interesting things as well. For example, the Cowboys utilized Twins, or two receivers, into the boundary, or the short side of the field, on several occasions. See an example shown below.

Teams will set the formation into the boundary for several reasons. First, it causes an alignment issue for the opponent. Defensive coordinators normally prefer to set the defensive strength of their defensive formation to the wide side of the field, and maybe put some of their weaker coverage defenders to the short side. So, lining up to the boundary can cause confusion for the defense. Additionally, it allows for the possibility of one-on-one coverage to the wide side and also gives that receiver a lot of space to work, as you see in the image above.

Something else that was interesting was lining up the Cowboy Back as the outside receiver, or splitting the Cowboy Back out as the lone receiver to one side. I don’t think Dunn has done this much, if at all, this season. See below for an example.

Not only is the Cowboy Back split on the outside, which will probably caused some confusion for the defense, but talented wide receiver Tylan Wallace is now lined up in the slot, which adds additional coverage complications for the opponent.

Here we see the Cowboy Back start the formation as the only receiver to one side, however before the snap another receiver will be motioned over.

We also saw the Pokes utilize the Diamond formation, which we have seen them do frequently, and some 10 personnel (one running back and no Cowboy Back/tight end), specifically on the last drive of regulation.

In terms of playcalling, this was the closest to a 50/50 split OSU has had in relation to run vs. pass. There were 51 rushing attempts against UT and 40 passing attempts. Through the air, quarterback Spencer Sanders had a nice performance. He was 27 of 40 (68% completion percentage) with four touchdowns and one interception. On his incompletions, there were some poor decisions, and he’s probably lucky he didn’t have at least one more pick, but I liked what I saw from him overall.

On the ground, the box score at first glance looks terrible… 130 yards on 51 carries and no touchdowns… an abysmal 2.5 yards per rush. However, if you remove the yards lost from sacks, yards per attempt looks slightly better at 3.6 yards per attempt, but overall still a tough day on the ground. Cowboy running back LD Brown was really the only player that ran the ball somewhat efficiently for the Pokes, outside of the one 19-yard run from receiver Braydon Johnson.

Now, let’s get to more specifics from this gameplan.

Creativity in the Running Game

H-Counter was used pretty frequently in former offensive coordinator Sean Gleeson’s scheme a year ago, but I don’t think we’ve see it this season from the Dunn-led offense. In H-Counter, the playside of the offensive line “down blocks,” or blocks the defenders away from the playside, while the backside guard and the H-Back, which is the Cowboy Back for OSU, pull around to lead block for the ball carrier. See the diagram below of a play from the Texas game.

And, here’s the accompanying video.

The H-Counter can be more effective than Power, in which the backside guard pulls and leads through the hole while the H-back performs the kick out, for teams because usually the guard is more capable of performing a kick out block on a large, physical defensive end than a Cowboy Back would be. In addition, it allows the more athletic Cowboy Back to attack the linebacker. See a diagram of Power below.

The Bash running concept stands for “Back Away”. The quarterback and the running back (or wide receiver in jet sweep motion), switch responsibilities. The QB will follow the primary run blocking, and the RB/WR will run away from the blocking around the outside. These runs are used to target defenses that are over pursuing to the playside (or flow of the offensive line).

In the diagram below you’ll see the Pokes run GT Counter Bash, which is another running play we saw several times with Gleeson last season.

It looks like a designed handoff here, but they can also tag a quarterback read to this play as well, or even a called quarterback keep. Here’s what it looks like when Sanders keeps it from a play last season.

Outside of these two plays, we saw some of the Split Zone, Zone Bluff, Inside Zone and Outside Zone concepts I’ve written about in previous games this year, along with some running back and quarterback Draw plays.

In the first half, OSU actually did a decent job running the football, specifically in the second quarter when they were averaging 4.1 yards per carry. But the injuries on the offensive line led to some shake up of that unit, resulting in some subpar run blocking in the second half. However, not all of it is on the blocking, there were some running back vision issues as well.

For instance, in the image below the Cowboys are running Outside Zone. The running back can either keep pressing towards the sideline or cut back inside depending on what the defense gives him. Here you see Chuba Hubbard has a lane to the outside, but he cuts it back early and is tackled for a loss.

The video of this play is below.

The main thing that stood out to me from the passing game against the Longhorns was some of the creativity in the red zone. The guys from the Tape Doesn’t Lie Podcast discussed it on their show this week, and it was probably the most fun part of this game to rewatch. The first play I wanted to point out was the second touchdown of the game. You can see it in the diagram below.

The video for this play is shown below.

OSU lines up in 11 personnel with the Cowboy Back in the backfield. They play-action a Split Zone run, while the wide receivers to the top of the screen look to be executing a bubble screen. Sanders makes a slight pump fake to the bubble screen receiver Landon Wolf, then Wolf releases up field on a wheel route. Johnson initially looks like he is going to block for the screen, then he breaks inward on a slant.

The other play I wanted to discuss is the third touchdown pass of the game. The one above was my personal favorite, but this one isn’t far behind. See the diagram below.

This time the Pokes are in 12 personnel, with one Cowboy Back on the line of scrimmage and one in the slot to the top of the screen. On the snap, the Cowboy Back split wide and the receiver to the bottom of the screen look to be running a Mesh concept, or crossing routes from both sides of the field, while the other receiver runs another crossing-type route a little bit deeper. With all of the action in the middle of the field, the defense doesn’t pay attention to the running back Hubbard sneaking out to the flat. The video of this play is below.

There were a lot of cool route concepts going on in this game and I really liked what I saw in this department from Dunn. I’m excited to see his playbook continue to be evolve throughout the season with more plays like this one for example.

If I’m able to get some All-22 film, I will try to go into more detail on these concepts in future posts.

As I mentioned above, I didn’t have many complaints in this aspect of the game. Sanders made some poor decisions, but I thought he had a good game through the air. If he can limit the turnovers, I think this offense can put up some high numbers on the scoreboard the rest of the year.