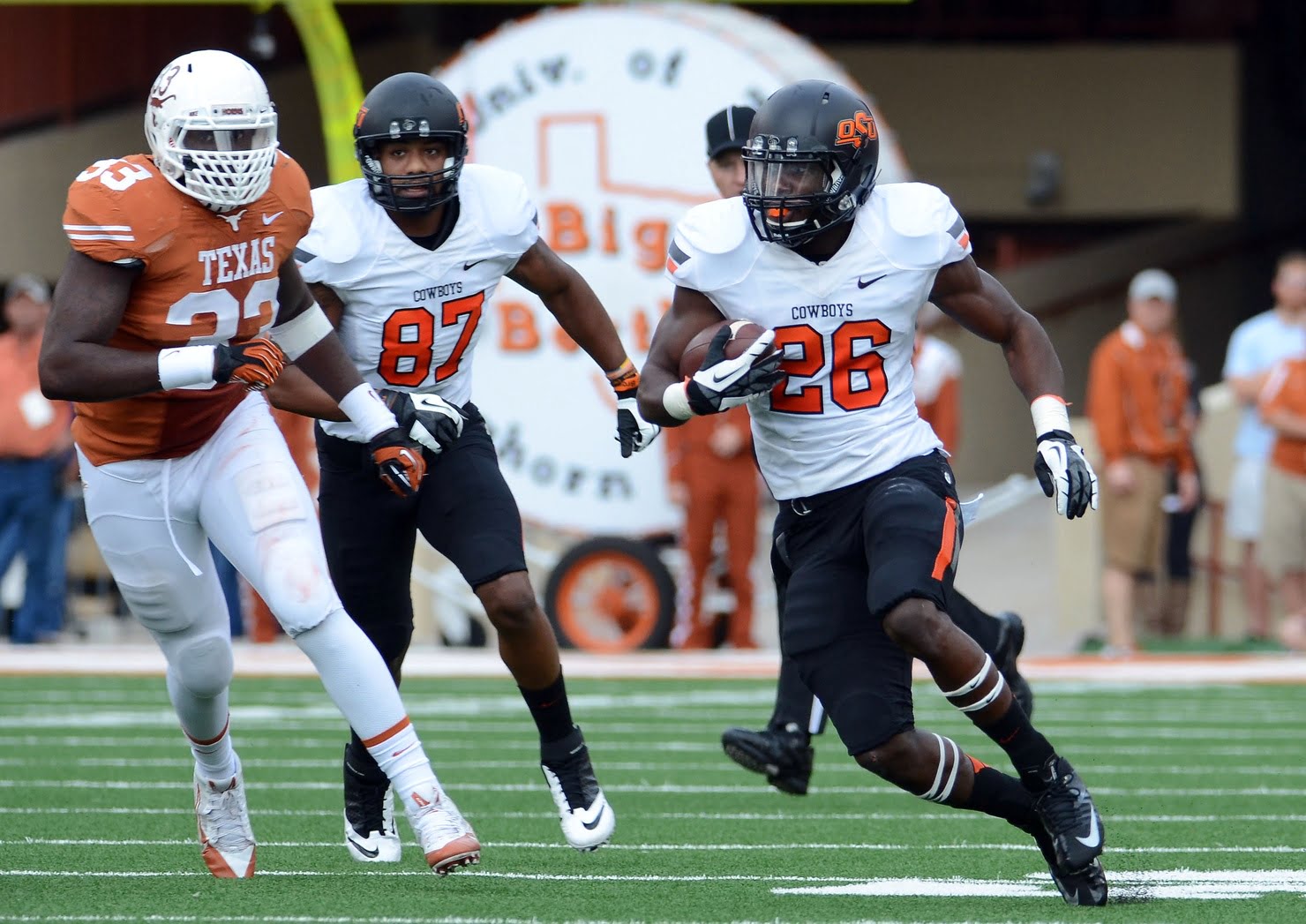 Will Desmond Roland have another solid game against the Horns? (USATSI)

Let’s get up to speed, shall we?

On a Saturday that saw TCU take down Kansas State, and Baylor absolutely manhandle OU in Norman (please have mercy on us next weekend), I can say I was absolutely thrilled with the Big 12 last week.

We didn’t have a game, therefore we couldn’t lose, and it was a really good time to get a break from the frustrations of late. That in itself was a big win for Cowboy fans.

I’ve looked ahead to this coming weekend against Texas for quite some time, as I had it marked in my calendar as the weekend we picked up win number six.

Then the Longhorns throttled West Virginia and I feel as though I’ve been living a lie. I actually have no idea what is real anymore.

Heading into Saturday, I’ve taken a look at the story lines and picked five that I’m particularly interested in. With a bowl game (and not much else) at stake, let’s take a look and my findings.

Being a Bully at Home

Remember the 2009 season when Houston came into Stillwater and beat the Cowboys? Well that was the last time Oklahoma State lost to an unranked opponent at home. As heartbreaking as that game was, at least it’s been a while since we felt that.

With 26 straight wins against unranked opponents at home, Gundy and the boys look to keep that streak alive against the unranked Longhorns on Saturday.

Not So Fast, My Friend

Despite the run of luck against unranked opponents at home, the Longhorns come into town having won seven straight games in Boone Pickens Stadium. That is no bueno.

Texas has a 23-5 record all-time against Oklahoma State, but the Pokes have taken three of the last four. This game is no heavyweight bout, but it appears to be evenly matched enough to perhaps notch another one in the win column for the Cowboys.

With a win over the Longhorns on Saturday, the Cowboys will have beaten Texas at home for the first time since 1997. I’ll save you the math: That’s 17 years.

There have been some frustrating games in that 17-year span, but one particular moment comes to mind: Vince Young pump-faking Donovan Woods out of his cleats on his way to an 80-yard touchdown run in 2005.

Saturday is senior night in Stillwater, and this group of men has been a big part of some great memories. Guys like Desmond Roland, James Castleman and Ofa Hautau immediately come to mind, but there’s plenty more contributors on the list.

These quotes from Mike Gundy say it all.

Best Shot at a Bowl Game

This is the third straight time I’ve listed this, but a win on Saturday would lock up a bowl game for the ninth straight season. It feels important to keep streaks like that alive, even in a re-building year.

There are two more games on the schedule after this one, but road games in Waco and Norman aren’t conducive to massive success. A win against Baylor or OU would mean more for next season’s momentum, but a win against Texas on Senior Night seems to be the most realistic.

I think the Cowboys get it done.