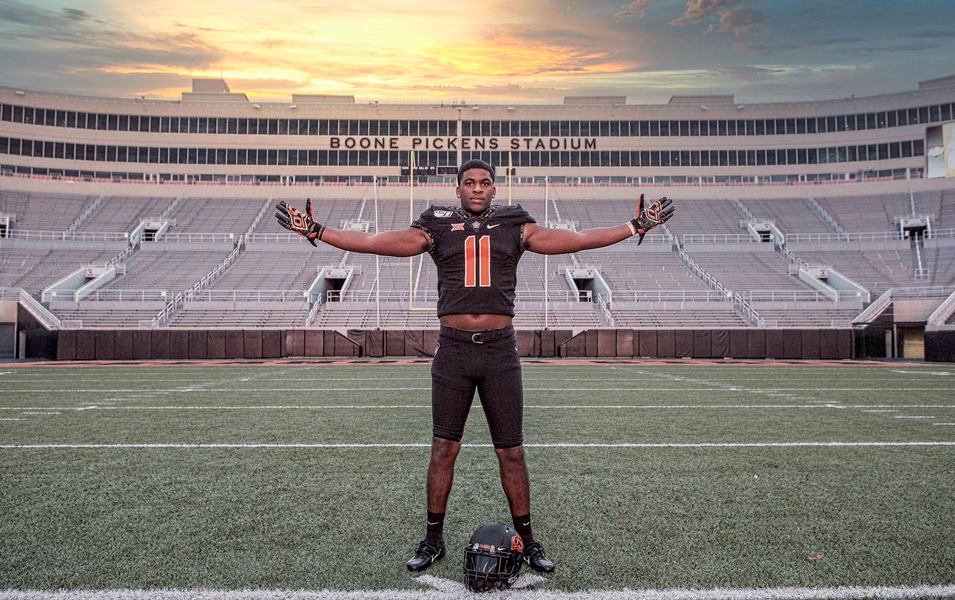 On Monday, I wrote about why I thought these five offensive players could be breakout stars in 2021 in their second season with the Oklahoma State program. As promised, I’m back today with a look at five defensive players who I think could have similar breakouts.

1. Collin Clay, DE: Only days after tearing his ACL in fall training camp, Collin Clay, an Arkansas transfer, finally got word that his eligibility waiver to play immediately in 2020 had been NCAA-approved. It was a legit bummer for a guy I’d slotted as a starter on the front line of OSU’s defense. But the breakout is indeed coming. With a fully healed ACL, an offseason of preparation and some training by none other than Rob Glass, he’s a guy whose future I think Pokes fans should be thrilled about. Havoc-wreaker who can get after the QB but also stuff the run. Dynamic weapon.

2. Jabbar Muhammad, CB: Despite joining a talented cornerback room and deep roster overall, Muhammad as a true freshman played in five games last season, gathering vital experience for a potential breakout. He enters this offseason as a real contender to earn reps at cornerback with Rodarius Williams off to the NFL. Christian Holmes should also get an opportunity for an expanded role opposite Jarrick Bernard-Converse, but it’s likely both will get a chance to showcase themselves as the permanent starter at corner. Big shoes to fill.

3. Lamont Bishop, LB: A junior college addition from last year’s recruiting class, Bishop joined the program to high acclaim. But a deep linebacking corps. allowed him to redshirt last season. Now, with Amen Ogbongbemiga and Calvin Bundage gone and Devin Harper eligible to move to the next chapter as well, a void is open for the taking at linebacker. I like Bishop’s potential here. His size and cover skills make him a real threat to be a difference-maker.

4. Mason Cobb, LB: Mason Cobb was just a guy based on recruiting rankings — he was the 15th-highest ranked 2020 signee of OSU’s 23-man class — but I loved his potential coming in because of his aggressive style of play as a ball-hawk who can rally to the football. He feels like a bit of a tweener at 6-foot, 230 pounds, but given he plays linebacker and has experience in high school as a defensive back, I think that’s a boon to his chances of playing. (See: Rodriguez, Malcolm.) I’m not going to try to put him into a box, either. He’s a football player who can do the football very well. Like his chances of seeing the field a lot in Year 2 in some sort of role at LB.

5. Nicolas Session, S: Another Utah native (like Cobb), Session saw some limited experience as a freshman getting his toes wet, but the opportunity is there for him to really seize the moment at safety. Kolby Harvell-Peel and Tre Sterling both returning makes it more challenging to see him being a true breakout star as a redshirt freshman, but he’s a guy who enrolled early and has a head start on some of the guys from his own class.