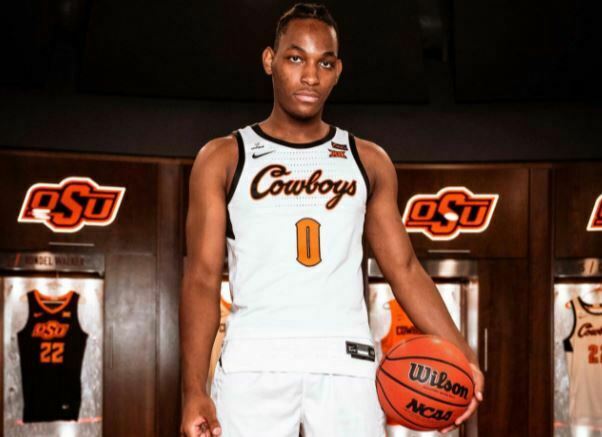 Mike Boynton could land his next five-star prospect as early as Tuesday.

MJ Rice, the No. 20 player in the 2022, announced via his social media accounts Saturday evening that he will make his college decision Tuesday.

Rice visited Oklahoma State in mid-June and has also made visits to Kansas and Pitt. He is a big-bodied, 6-foot-5, 225-pound wing. He played for national power Oak Hill Academy before transferring to Prolific Prep, another national power.

As mentioned above, Rice sits at No. 20 in the 2022 composite rankings. The composite system and ESPN list him as a five-star recruit, whereas Rivals and 247Sports have him as a four-star prospect.

Rice is built like someone who likes to attack downhill, but that’s only a small part of his game. He is a three-level scorer with a smooth jumper from deep, something he has showed a lot this summer with Team Loaded, an AAU squad based out of his native North Carolina.

His recruitment has been a tough one to pin down. At one point, NC State seemed to be the favorite. There was also a time in early June that Rice seemed destined for the professional route. Then he took his visits to Stillwater and Lawrence then recently had a visit to Pitt this past week.

Boynton tallied his first commitment of the 2022 cycle last week adding Quion Williams out of Texas. If Rice were to pick the Pokes, it would move OSU’s class to No. 16 in the nation. Rice’s composite score of 0.9911 would rank eighth in program history, between Obi Muonelo’s 0.9914 and James Anderson’s 0.9910.