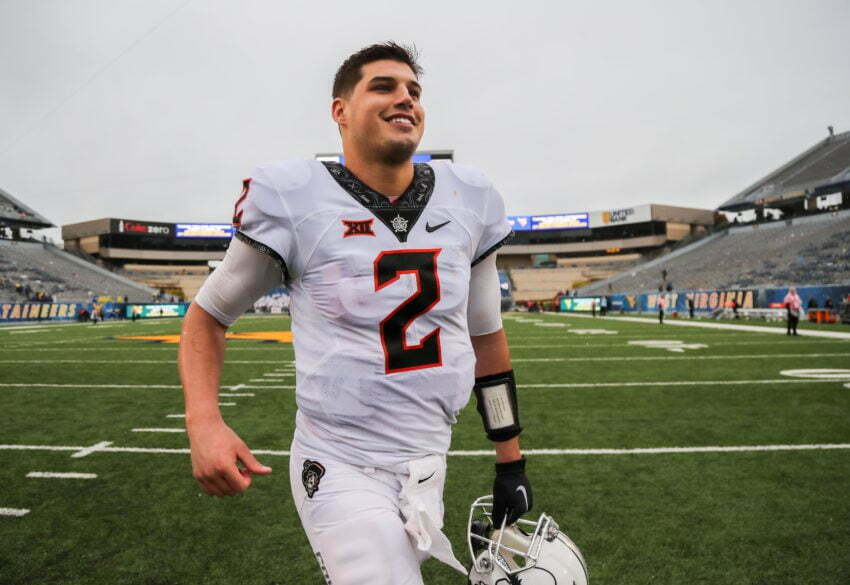 Another win for Oklahoma State and another wild game that felt closer at times than it ever should have. On the flip side, I believe the game both revealed a lot about this Oklahoma State team and solidified a lot of our beliefs. Those included some good things (3rd down defense) and some bad (special teams). After combing through the postgame info, there were five things in particular that really stood out to me.

After all the talk early in the season about how bad Oklahoma State’s third-down defense was, the team has made a complete 180.

The Cowboys held West Virginia to 2-15 on third down attempts, or 13 percent completion. Yes, WVU entered the game averaging a completion rate of just 39 percent, but to hold them to less than half of that is impressive.

It goes beyond even that. Ever since my piece on 3rd downs under Glenn Spencer, OSU has held WVU to 13 percent and Texas to 18 percent.

In fact they’ve been so good, their season average has gone from 45 percent to 38 percent and from 113th in the country, to 64th. That’s huge, especially considering it’s come during the first two games of what we’ve all considered an important four-game gauntlet.

2. OSU has a(nother) workhorse at RB

I have to give credit to Tulsa World beat writer Mark Cooper for catching this one.

J.D. King's 36 carries were the most by an #OKState player in the Mike Gundy era and the most since at least 2000.

King was a beast on Saturday after Justice Hill got dinged up — 36 carries for 142 yards and a touchdown.

Before Saturday, the most carries King had in a Big 12 game this season were 11 against Texas. He came into the game averaging just under six carries a game in league play.

On the flip side, Justice Hill has averaged 25.5 carries a game, with two games (Texas, Texas Tech) in the 30s.

It feels like when it comes to the run game, Gundy has a one-two punch at running back but seems to just be throwing right hooks every week until the arm finally gave out and he had to go with his left.

For OSU to reach its goal of a Big 12 title game appearance this season, I think we need to see a more balanced use of both backs. King proved on Saturday, he’s up to the task.

3. Road Rudolph has been solid

There’s a spooky number heading into Halloween, but it’s an interesting one; it’s Mason Rudolph’s completion percentage on the road this season.

It’s not scary for OSU, it’s scary for opposing teams. Why? Because it’s higher than his home completion percentage; 66.6 percent compared to 63.5 percent.

Yes, the Cowboys have played five road games compared to just three home games, but still. We’ve always thought that Rudolph is better at home, but not this year.

Throw in the fact that he’s one win in Ames away from going unbeaten on the road in a season for the second time (2015) in his Oklahoma State career. I never thought I’d say this, but maybe we should start calling Rudolph the road warrior.

4. Special Teams may be worse than you thought

We have to talk about the special teams. As it has been noted on social media, and this site, they are “special” this year. I’ve never seen a Mike Gundy-coached team look this bad on that side of the ball. Ever. And he knows they’re bad.

From punting issues to dumb penalties, to blocked kicks and dropped punts; it’s been a horror show for sure. This Saturday alone they gave WVU a touchdown and cost OSU an extra point.

They’re so bad in fact, according to ESPN’s Team Efficiency tracker, they’re the worst in the country, and it’s not even close. OSU is the only team with an efficiency rating lower than 20, at 19.3 percent.

While it didn’t cost them against West Virginia, and likely won’t against OU (which has an efficiency percentage of 27.5 for fourth worst in the country), it could cause trouble down the road. Iowa State is ranked 36th and Kansas State is ranked No. 2 nationally.

5. OSU can give even great QBs fits

Let’s end this on a positive note.

Bravo again to the Oklahoma State defense, which forced West Virginia quarterback Will Grier into his worst game of the season. And it wasn’t even close.

Grier ended the day with his second first number of completions (20), was held under 300 passing yards for the first time (285), and was forced into his first multi-interception game (4), all leading to a final QBR of 3.6 (!) That’s impressive.

He felt pressured all day which led to these kinds of mistakes.

Coming into the day, Grier was the best quarterback OSU had faced. At the end of the day, the Oklahoma State defense made him look like one of the worst.