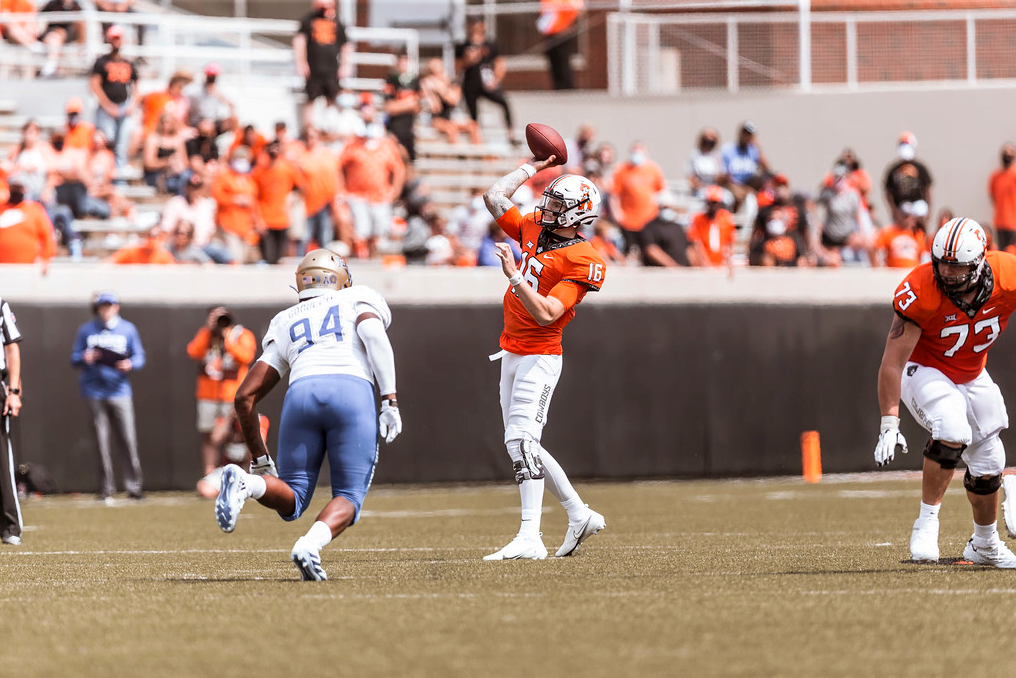 True freshman quarterback Shane Illingworth performed admirably in relief of injured starter Spencer Sanders on Saturday, completing four of his five passing attempts for 74 yards and leading Oklahoma State’s offense — which was anemic for two quarters under Ethan Bullock — to a critical scoring drive that culminated with a 3-yard touchdown rush from Chuba Hubbard to start the fourth quarter.

Illingworth missed some practice time in recent weeks because of contract tracing protocols related to COVID-19, but he looks to have secured the backup job with his performance on Saturday ahead of Bullock. And should Sanders miss time, either because of his current lower body injury or because of any potential future ailment, he’ll presumably be the guy moving forward.

So what do we know about the true freshman? We’ve already given some lengthy overviews of backup quarterbacks Ethan Bullock and Shaun Taylor, so let’s get you up to speed on the man who presumably is next up — either now or in the future.

1. Blue-chip pedigree: Illingworth was the highest-rated signee in OSU’s 2020 recruiting class. A consensus four-star prospect from Norco, California, the 247Sports Composite — which aggregates all the recruiting website’s evaluation of him — rated him as the No. 6 pro-style prospect in America and the 164th overall recruit in his classification. He committed to OSU in May of 2019 over Louisville and Arkansas. Arizona, Arizona State, Colorado, Boston College, Oregon State, Washington State and San Jose State also offered. (Notably: USC and UCLA passed.)

2. Early enrollee: Five Class of 2020 signees enrolled early at OSU this spring, and four of them — Illingworth, Quinton Stewart (TE), Monroe Mills (OL) and Eli Russ (OL) — were on the offensive side of the ball. Now, because of the whole global pandemic thing, spring ball was cut short. But enrolling early did at the very least give Illingworth an advantage of getting into the weights program, familiarizing himself with his teammates and learning at least a portion of what Division-I football was like. The last quarterback who enrolled early and wound up starting as a true freshman — which Illingworth could potentially do, dependent upon Sanders’ health — was Mason Rudolph in 2014.

3. Different flavor than Spencer Sanders: You’ve watched enough Spencer Sanders that I don’t need to educate you on his style of play. He’s a dual-threat guy who is equally as dangerous with his legs as with his arm. Illingworth, however, is more of a pocket passer. We saw some nice pocket movement from him Saturday, and he’s not as immobile as, say, Big Ben. But he’s not going to go full Lamar Jackson on you. (If I’m wrong about that, then I will be gleeful.)

“Spencer and Shane are on opposite ends of the spectrum,” said OSU offensive coordinator Kasey Dunn after the game.

4. Family in Oklahoma: What’s a Cali boy doing going to school, willingly, in Stillwater, America? During his recruitment, that was the reason I suspected initially that OSU would have no chance. But then I learned thereafter that Illingworth, while he grew up in California, has family from Perry, Lindsay and Mustang, Oklahoma, and he’s visited the state on numerous occasions over the years.