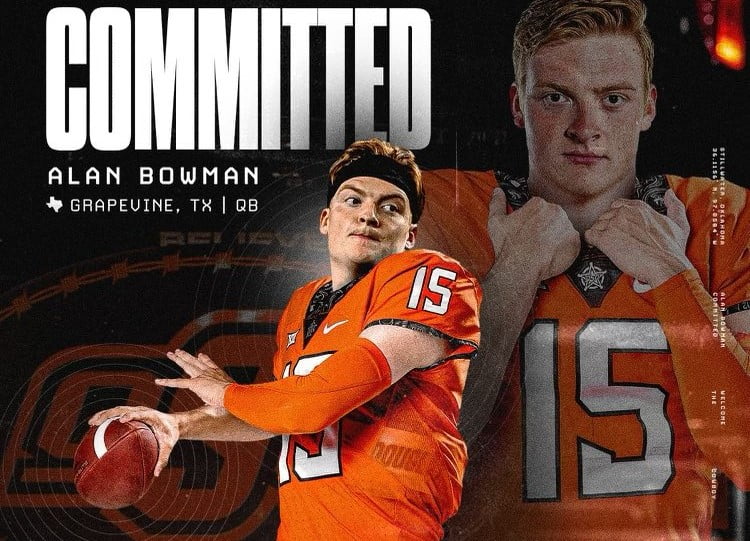 After weeks of wonder, the Cowboys have locked down an experienced quarterback for the 2023 season.

1. He Has Won in Stillwater Before

Alan Bowman won the starting job as a true freshman at Texas Tech, and after throwing for 1,160 yards, eight touchdowns and no interceptions in his first three college games, he led the Red Raiders into Stillwater and left with a 41-17 win.

He threw for 397 yards and two touchdowns that day. He did throw his first two college interceptions in Boone Pickens Stadium (one to A.J. Green and one to Jarrick Bernard-Converse).

“They’ve got a young quarterback who is throwing it around and has come along,” said Mike Gundy entering the game. “He’s a really good player. This league will be disappointed to see him for the next three or four years, or however long it’ll be. He seems to understand their system and looks like he gets it. They’re moving the ball and scoring lots of points.”

He has also lost in Stillwater, but he still led an offense that hung 44 points on the Cowboys in 2020. OSU won the 2020 meeting 50-44, where Bowman threw for 384 yards, three touchdowns and an interceptions. He had a 48-yard TD pass to Erik Ezukanma that day.

So for those keeping score, in two games in Boone Pickens Stadium, Bowman has thrown for 781 yards and five touchdowns.

2. Injuries Derailed His Time at Tech

As promising as his Tech career started, Bowman’s time in Lubbock ended somewhat unceremoniously with a handful of injuries.

Bowman missed four games in 2018 because of a collapsed lung before missing nine games in 2019 with a broken collarbone. Then he missed time in 2020 with an ankle injury before leaving Lubbock as a graduate transfer to Michigan, where he played sparingly as the Wolverines made it to consecutive College Football Playoffs.

3. He Has Played Already Played Five Seasons of College Football

A product of the COVID era of college athletics, Bowman has already taken part in five college football seasons.

His freshman season in 2018 counted toward his eligibility, but because of all the time he missed in 2019, he was able to redshirt. Then the 2020 season didn’t count toward his eligibility because of the pandemic. So, after starting in 2018, 2021 was somehow technically his redshirt sophomore season. But 2023 will finally be the end of Bowman’s career — at least probably.

In four seasons at Grapevine High School, Bowman threw for 11,393 yards and 119 touchdowns.

Grapevine had a 30-16 record in that time, with half of those losses coming in Bowman’s freshman season.

So what happens when you put up gaudy numbers in Texas high school football? Kliff Kingsbury takes notice.

Texas Tech offered Bowman on June 11, 2017, and he committed three days latter. Ole Miss made a late push for Bowman, offering him shortly before signing day, but he stuck with the Red Raiders.

Bowman will undoubtedly draw comparisons to Spencer Sanders throughout next season, but aside from both being quarterbacks, there aren’t a ton of similarities.

In his career, Bowman has rushed for -9 yards and only two touchdowns. His best rushing season came in 2019 when he had 14 yards and a touchdown. He is a different style of player than Sanders.

Yes, both are veteran quarterbacks in the college football world. No, they aren’t all that similar in play style.