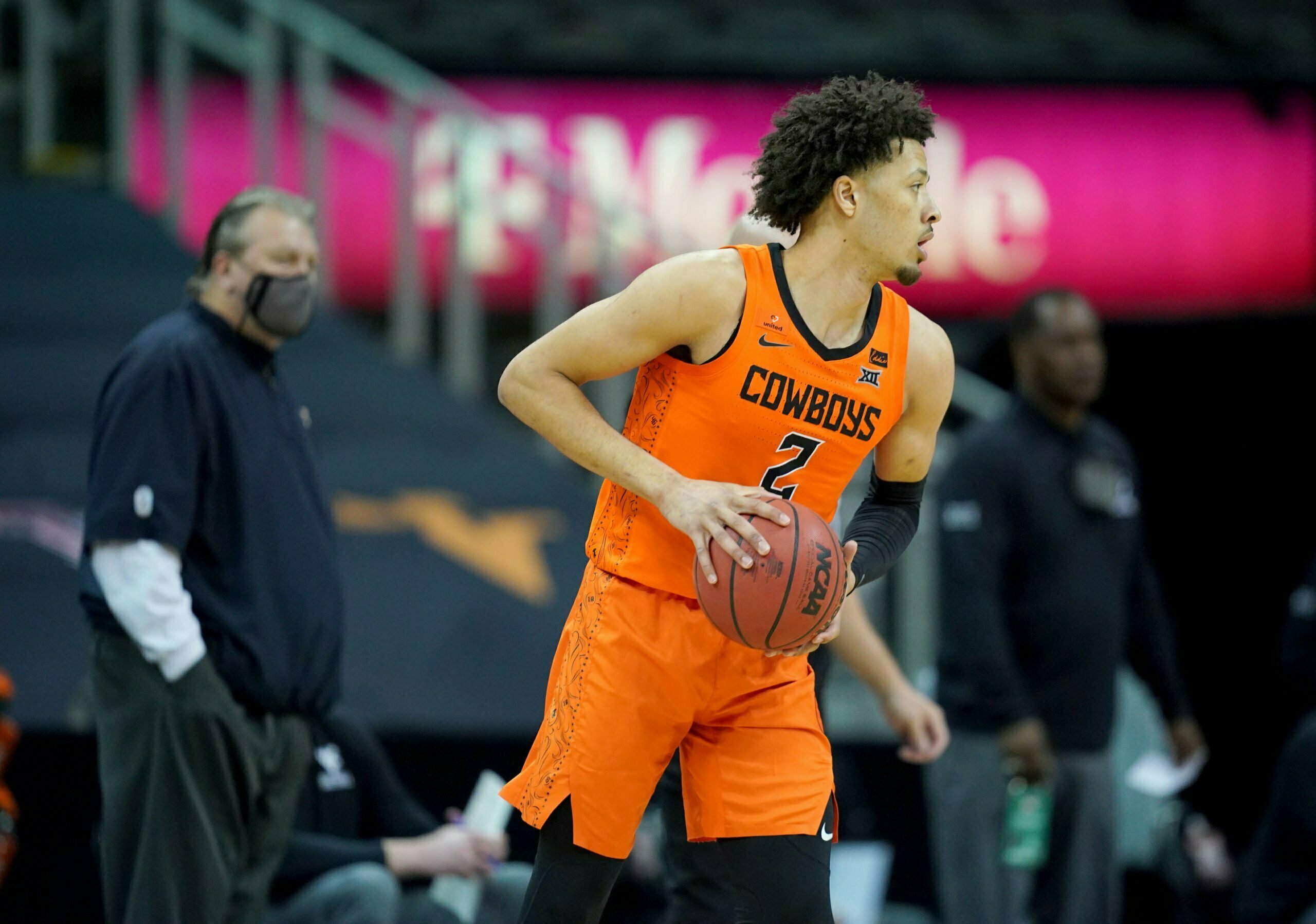 On Thursday, Oklahoma State defeated a Top 10 West Virginia for the second time in less than a week. The Cowboys’ prize? A Big 12 Championship semifinal matchup against top-seeded Baylor on Friday night.

Here are five things to consider before the quick turnaround against the nation’s No. 2 team.

1. Semis Have Been a Long Time Coming

The Cowboys have had plenty of history in the Big 12 Tournament, but it’s been a minute since they really made some noise in Kansas City.

This is the first time that Oklahoma State has advanced to the semifinals of the conference tournament in almost a decade when Travis Ford’s 2012-13 team fell to Kansas.

Since the inception of the conference tournament in 1996, the Cowboys have made it this far just seven times. Four of those runs ended in the semifinals, and the Pokes are 2-1 all-time in Big 12 Championship games. But before we can start pondering that scenario, there’s an assassin waiting to pick off the Pokes.

Cade’s fellow All-Big 12 first-team guard has had his way with OSU during his career. In six career meetings with Oklahoma State, Jared Butler is 5-1 and is averaging 16.8 points per game. It’s not a coincidence that the one loss came in his only single-digit career outing against the Pokes.

Butler scored 22 point in each of his two meetings with OSU this season and went a combined 10-of-14 from 3. Cade might be the best scorer in the Big 12, but Butler’s the league’s best scorer against OSU.

3. Bears Have Yet to Face OSU at Full Strength

When Baylor bested OSU in Stillwater back in January, the Cowboys were without Cade Cunningham and Rondel Walker. Oh yeah, and Isaac Likekele had his worst shooting performance of the season, going 1-for-8 from the field.

Likekele missed the Cowboys’ loss in Waco, and Cade sat for the final 47 seconds when he tweaked his ankle, though it was pretty much out of reach for the Pokes.

Both Cade and Ice returned on Thursday with the former sharing the team lead with 17 points and the latter chipping in 10 and seven rebounds while making a couple huge plays down the stretch to beat WVU. We’ll see what type of difference the Pokes’ complete backcourt came make.

4. Turnovers Could Be Huge

The Cowboys have committed 58 turnovers in the last three games. You might point out that they went 2-1 against a pair of Top 10 teams, but what kind of performances are they leaving out there on the floor?

After Thursday’s win, Mike Boynton expressed his concern on the issue.

“You can’t keep turning it over 20 times, not against the competition we’re playing,” said Boynton. “So you got to be honest about, ‘Let’s be intentional about cutting those down to the 15ish range.'”

If you’ll permit me to cherry-pick some numbers from the last three games (Baylor, WVU and WVU), the Cowboys gave up 70 points off of those 58 turnovers which comes out to 1.2 points per turnover committed. Drop those TOs by five, as Boynton mentioned, and that’s six points per game in OSU’s favor. That’s not a perfect stat but it makes my point.

In OSU’s loss to Baylor a week ago, the Cowboys gifted the Bears 26 points of those errors but were still within that six-point threshold with 1:03 remaining.

We keep waiting for the Cowboys’ turnover problem to bite them in the keister, but it mostly hasn’t. They’ve committed 20 or more TOs five times this season and are 5-0 in those games.

It’s hard to argue with the end results, but from here on out every game carries more weight, in this tournament and the next. If the Cowboys want to live up to their potential, and the NCAA sleeper buzz they’ve been garnering, they need to cut down on the self-inflected wounds.

5. One Hell of a Warmup for the Big Dance

Despite some warts, the Cowboys have been one of the hottest teams in the country over the last month, and they’ve done so playing some of the stiffest competition in college hoops.

Including Friday night’s tilt, the Pokes will have played seven-straight ranked opponents and afterward they’ll either be 5-2 and begin readying for March Madness, or be 6-1 and prepping for an eighth Top 25 foe in the conference title game. There’s a not-so-crazy scenario in which the 3-seeded Cowboys (check Joe Lunardi’s Friday morning projection) could get all the way to the Final Four by playing just two Top 25 teams.

The Cowboys seem to be getting healthy and getting better at the perfect time of the year. And when they get to the games that really matter, they’ll be as tested as any team in the field.