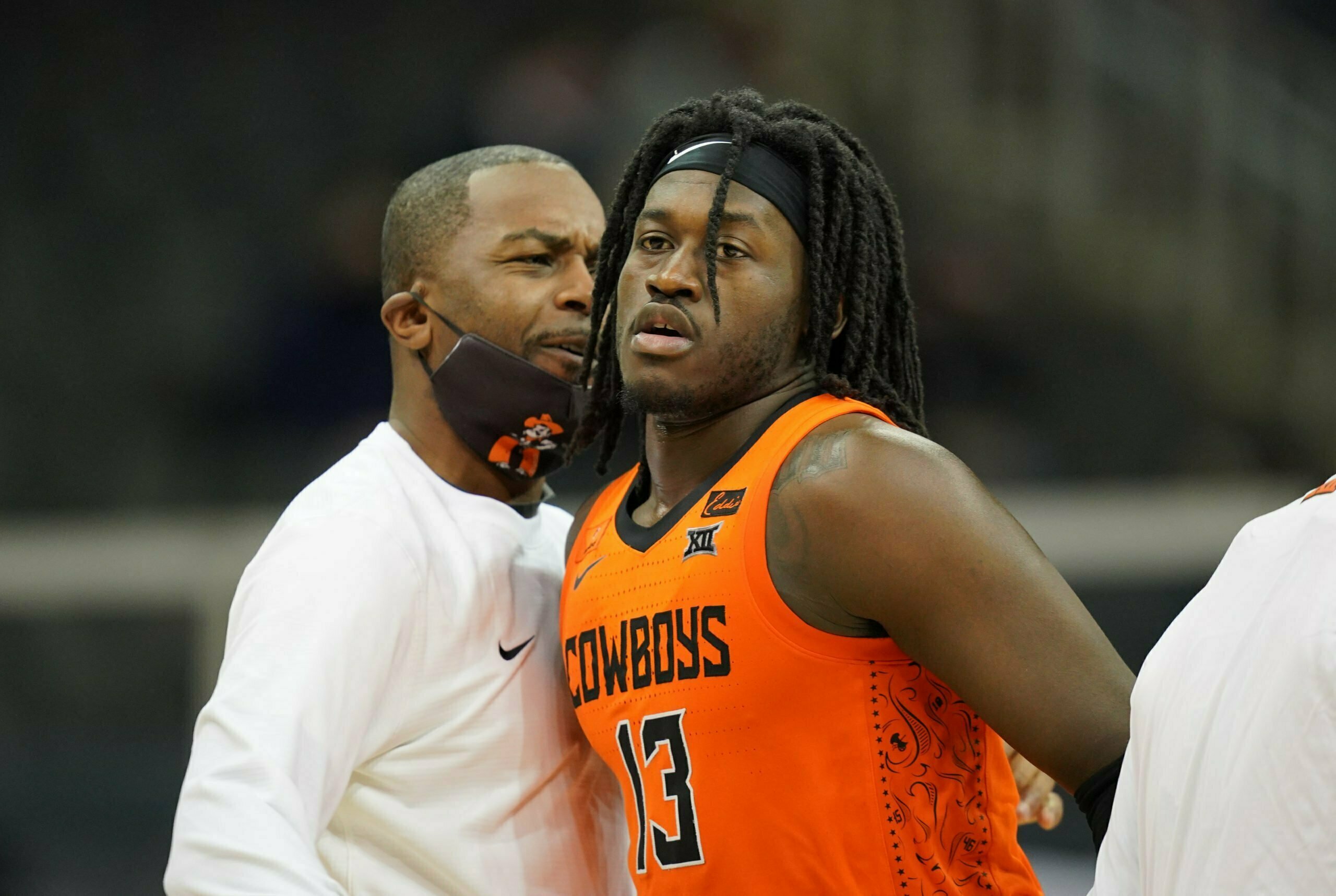 For the 14th time this season, the Cowboys’ game was decided by five or fewer points.

Oklahoma State topped West Virginia 72-69 on Thursday in the quarterfinal round of the Big 12 Tournament. The three-point victory came after a scramble in the final moments.

Isaac Likekele was able to block Taz Sherman’s 3-point attempt before the ball found its way to sharpshooter Sean McNeil. McNeil was forced into two pump fakes as Bryce Williams flew by him, but he got his shot up after the buzzer. It went in but didn’t count.

The Cowboys advance to play Baylor at 5:30 p.m. Friday in the tournament semifinals, but before that, here are five thoughts on OSU’s win against West Virginia.

Without Cade Cunningham and Isaac Likekele on Saturday, Avery Anderson was the Cowboys’ hero in an upset victory in Morgantown. With Cunningham and Likekele back Thursday, Anderson still killed the Mountaineers.

Anderson’s second half started with a 5-0 run where he hit a 3 and a layup on consecutive possessions.

Anderson then ended an eight-minute scoring drought with a steal and slam.

He followed that slam by scoring on his next two shots, a layup and his second 3 of the half.

That spree from Anderson was part of a 21-3 run that saw the Pokes take a 10-point lead.

Anderson also had the game-winning bucket on a take to the rim, answering a West Virginia go-ahead 3.

With Cunningham back, Anderson probably won’t go for 30-plus again this season, but Cunningham’s return should allow for continued opportunities for Anderson because Cunningham is going to draw the opponent’s best defender.

OSU’s guard depth can flex in this area because if a coach puts his best defender on Cunningham, who does he put his second-best defender on? Anderson? Likekele? Whichever he picks, he is going to have to put his worst-defending guard on the other.

2. The Door Was Left Open

It is mid-March, and the Cowboys are still winning games despite shooting 60% from the foul line and turning the ball over 20 times.

I don’t know if that should be frustrating or promising for OSU fans that this team still has area for improvement this late in the season, but it is what it is.

After shooting 14 fewer free throws than West Virginia on Saturday in Morgantown, the Pokes shot 11 more than WVU on Thursday. However, OSU was just 12-for-20 from the line.

OSU had 20 turnovers (a handful of which came via charge), which the Mountaineers were able to score 22 points off. It was the fourth time this season OSU had at least 20 turnovers, and three of the four have come in the Cowboys’ past five games.

The Cowboys had three turnovers in the final minute of the first half, and West Virginia scored seven points in that minute to take a 36-30 halftime lead.

The Cowboys had been doing better from the free-throw line, as this was just the third time they shot below 70% from the stripe since Feb. 6, but this was the lowest percentage of makes OSU has had from there since the first game of the year.

This game seemed weirder than normal, as OSU also missed 16 layup attempts, and Cade Cunningham even slammed a would-be dunk off the rim.

This is the best team Oklahoma State has fielded in a while, but it’s crazy to think just how much better it could be if some of these things get cleaned up. But then you have to wonder if that’s even possible this late into the year.

“There is a small hint of frustration because, the truth is, at some point it’s gonna bite you,” Boynton said. “You can’t keep turning it over 20 times, not against the competition we’re playing. So you got to be honest about, ‘Let’s be intentional about cutting those down to the 15ish range.’ We’re a pretty aggressive team. We’re gonna probably turn over more than say a K-State, who is pretty possession-conscious. We want high possession games which leads to more turnovers.

“On the flip side, I have a lot of optimism that if we have opportunities to keep playing, this team has shown the ability to get better at things. We’ve gotten better at closing games. We’ve got better at playing with different lineups, and I think we’ll get better at taking care of the ball. That’s one thing I’ll continue to lose sleep over until we do it.”

On Saturday, the Mountaineers primarily switched on OSU ball screens, but with Cunningham back in the Cowboy lineup, Bob Huggins turned to traps Thursday.

OSU’s poster boy spent much of the first half trapped between two Mountaineers near the half-court line. He made a lot of solid passes out of them early, but Cunningham did finish with a game-high six turnovers.

There are a few different thought processes that could be taken from this. One being, if the opponent is doubling out of ball screens, why bring a ball screen? Just let Cade play one-on-one. The other thought process is that if Cunningham is able to pass out of those traps, the Cowboys are playing 4 vs. 3 elsewhere on the court.

The right answer on what to do fluctuates throughout the game, but I think Boynton and OSU have handled that balance well.

Despite not having his best game, Cunningham still put up 17 points, eight rebounds, four assists and two steals. He also threw this incredible cross-court bounce pass:

In his first game since Feb. 22, Isaac Likekele was sneakily a big factor in the Cowboys victory.

Likekele locked up Sherman on his would-be game-tying 3-point attempt. It was a crucial block, as Sherman had already hit four 3-pointers in the game.

Likekele finished his first game back with 10 points (which I think will get turned to eight after a box score update), seven rebounds and three assists. He had five of his rebounds in the second half, including three in the final two minutes.

For most of his career, Likekele has been quietly good, and that fits in well with this high-octane team where a lot of guys can handle the scoring load.

5. A Rematch with the Bears Awaits

The Cowboys have put together two good halves against Baylor this season, but it just so happens that those halves came in different games. OSU will have a chance to string a full game together against the Bears in Friday’s semifinal matchup.

In Stillwater on Jan. 23, the Cowboys held a 36-32 halftime lead on the Bears without Cade Cunningham or Rondel Walker. However, the Pokes got ran in the second half and fell 81-66.

In Waco on March 4, the Cowboys started the second half against Baylor down 11 and ended the game down 11. The Cowboys fought to within four a few times.

So, the potential is there for the Cowboys to upset the No. 2 team in the country, but that’s easier said than done against a team that will enter Friday’s game 22-1.

But, the Cowboys are looking forward to redemption.

“We ready,” Anderson said. “We got everyone back. I think everybody’s ready to play them again. I’m ready at least.”

“Not just you, bro,” Cunningham added.