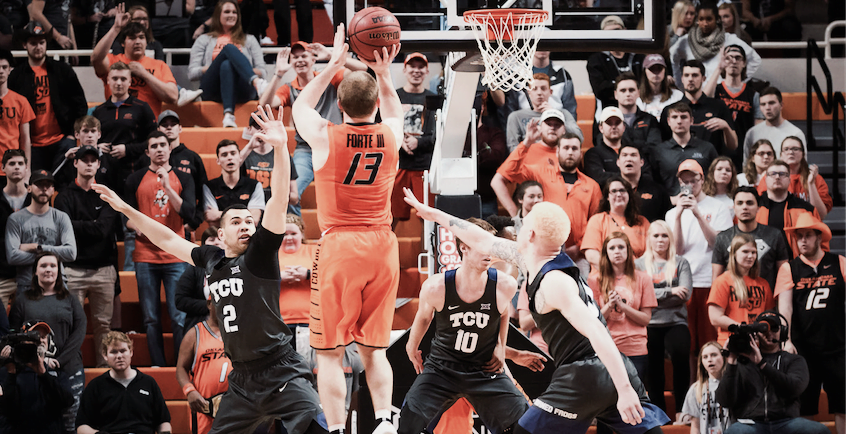 If I could get a GIF of Brad Underwood giving an Aaron Rodgers-esque R-E-L-A-X reaction, here is where I would embed it.

After starting 0-6 in Big 12 play, the general reaction I gathered from people ranged anywhere from calling this a lost season, to sheer embarrassment. The reality is that OSU is finally regressing towards the mean. And this team ain’t so bad.

Oklahoma State is now on a two-game winning streak in league play (its first conference winning streak since 2015 — hooray, a streak!), and all of a sudden the outlook looks increasingly more bright.

Before we get to the five thoughts, make sure you catch up on all the other hoops coverage.

1. How good was Jawun Evans?

Evans has been on the receiving end of a bevy of criticism, and perhaps undeservedly. A lot of his good play this season has been hidden in the shadows of his foul troubles in nearly every game. It’s to the point where his presence merely on the floor in the second half is 50-50 and depends on whether Underwood wants to roll the dice with his best player in foul trouble.

Maybe he was tired of not getting enough minutes and riding the pine. Or maybe Underwood’s message to play a smarter brand of basketball got to him. Because he was, for 35 minutes, the best player on the floor. And he only ended the game with one foul.

Brad Underwood was no doubt brought in to bring in a more intense style of defense. Over the last few games, there has been marked improvement on the defensive end. So where is it coming from?

I’m always interested to see the advanced statistics from KenPom.com, and one stat in particular jumped out to me: Time of possession for opponents.

It’s really not a stat that tells too much, but it does for OSU. The Cowboys are last in the nation — 351 teams! — in time of possession allowed. Meaning OSU’s opponents shoot the ball more quickly than any other team’s opponents.

Oklahoma State’s defense has tightened up some of those lazy rotations, and as a result we get possessions like the one below. This is the equivalent of a coverage sack in football.

The premise behind this new defense, along with getting takeaways and quick points off turnovers, is to force teams into hanging on to the ball and taking ill-advised shots or forced shots late in the shot clock. In those areas, OSU is much more sound than they were two weeks ago.

3. A real offense is being ran in Stillwater, and it’s beautiful

Sorry to be flashing out the advanced stats again, but Oklahoma State is plastered all over the top of the leaderboard at KenPom. It’s a walking Underwood advertisement.

The Cowboys, after their 89-point performance against TCU, are now fourth nationally in adjusted offensive efficiency, scoring 122.4 points per 100 possessions. Behind UCLA, Villanova, and Kentucky — three top-10 ranked teams in the AP poll. That type of offensive efficiency is notably ahead of Kansas, West Virginia, and Gonzaga. All are ELITE offenses.

It’s more than just the Jawun Evans memorial offense, which is what is most noteworthy. The ball is being shared. EVERYONE is touching the ball. And OSU gets a layup (a contested one, that was a nice move by Averette) out of it.

4. Davon Dillard has been a revelation

I made note of this in the last five thoughts that Underwood was in full experimentation mode with the junior wing Davon Dillard. And I’m monitoring it closely moving forward, because his progress may be the difference between an opening weekend tourney loss and potentially making it farther.

Dillard is the most athletic wing OSU has on the roster. He has a long ways to go in shoring up some of his mental lapses on defense, and on the whole I don’t think he’s a lockdown perimeter defender. But he has the length and quick enough feet to stay in front of someone. And it’s his offense over this recent stretch that has helped him evolve into one of OSU’s most important bench players.

He’s gone from 3.1 minutes per game (and not appearing in 8 games), to 11.8 minutes and 5.2 points per game. But he’s most important because he can do stuff like this.

No offense to Thomas Dziagwa or to Lindy Waters — they are and will be very good players in their own right. But they don’t touch the athleticism that Dillard can bring with plays like that.

5. Oklahoma State dominated in the paint

(Shoutout to Carson Cunningham for bringing this to my attention in our slack chat.)

An area that sunk the Cowboys less than a week ago turned into a huge asset on Monday evening. OSU nearly doubled up TCU’s production in the paint, scoring 50 in the easy area to TCU’s 26.

That says a lot about OSU’s offense getting buckets around the rim. And it may say more about its ability to keep TCU out of the paint.

Look, Brodziansky is no Mitch Chamberlain. And the Horned Frogs frontcourt outside of him is pretty limited from a scoring perspective. But going back to those crisper defensive rotations, that improvement definitely helped limit the easy opportunities for guards slicing down the lane or finding cutters on the back end of the defense.

Also, it helps when you have a guy who can do things like this … points in the paint, whether it be from a back-cut layup or a drive and dish down the lane all count the same.