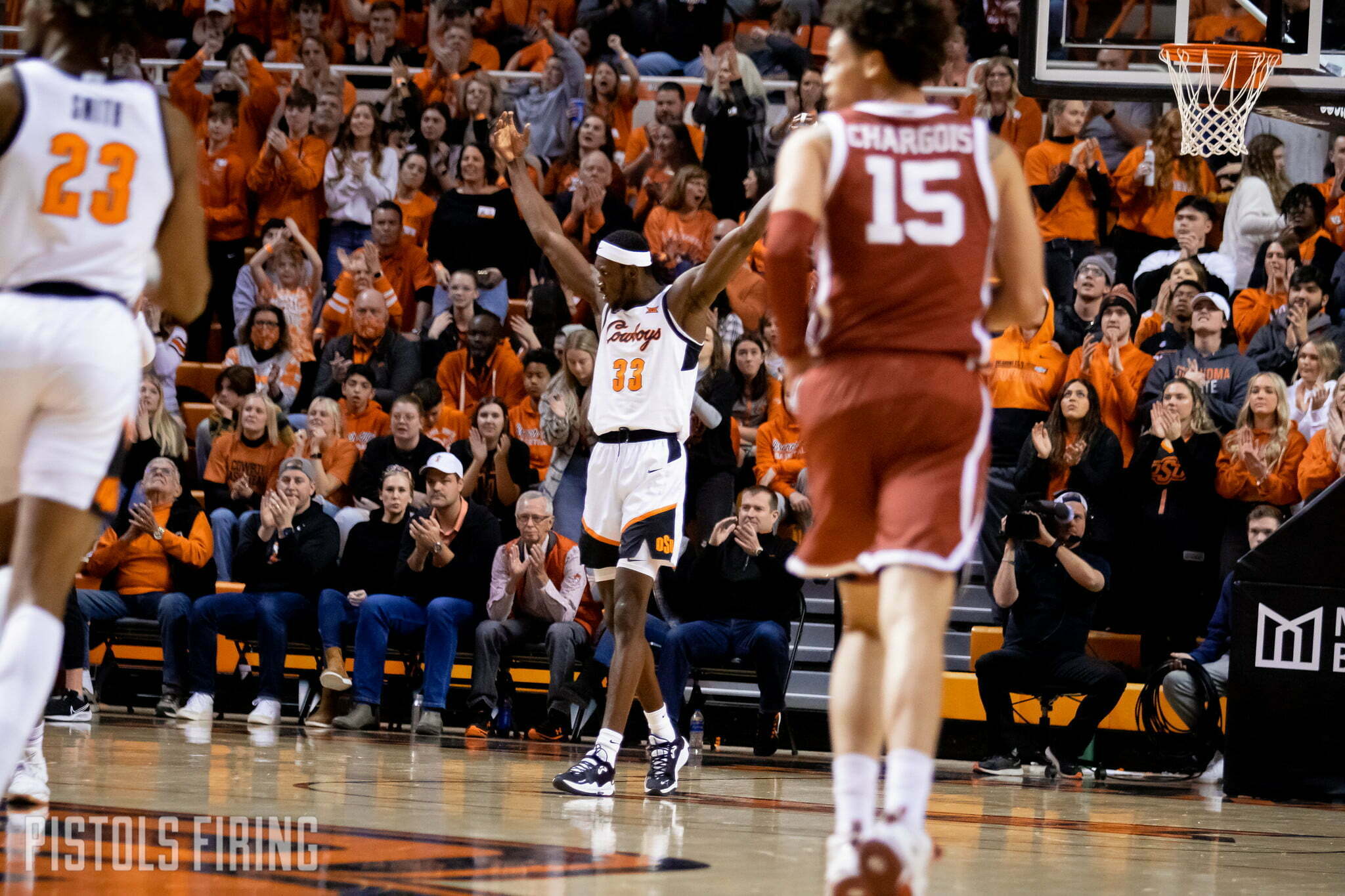 STILLWATER — The Cowboys’ four-game skid is over, and all it took was a little Bedlam.

Oklahoma State defeated Oklahoma 64-55 on Saturday in Gallagher-Iba Arena. Here are five thoughts from the game.

1. Battle of the Bigs

Moussa Cisse and Kalib Boone took it to the Sooners.

Boone has played sparingly for much of 2022, only playing more than 10 minutes twice in the calendar year. He played 17 on Saturday, where he had five rebounds, an assist and a block to go with his dozen points. He did his offensive damage the old school Kalib Boone way — with his back to the basket. Often working against Tanner Groves, Boone was 4-for-10 from the field and managed to get to the foul line for five shots, of which he hit four.

He spoke candidly postgame about having to find himself again in recent weeks, but the Tulsa kid’s quote on the Bedlam rivalry will draw more eyeballs.

“It’s Bedlam,” Boone said. “It’s just Bedlam. Obviously we would love to beat every team in the Big 12, it means something. But when it’s time to play little brother, it’s time to beat up little brother. And I have so much respect for OU, but yeah.”

In his first Bedlam contest, Cisse recorded only one block but altered many others. He also had three rebounds and two steals. Cisse worked his developing post game more Saturday than he has in a while. He was 5-for-8 from the field. The eight attempts are the second-most he has had in a game this season. Still, a good chunk of his points came off thunderous lobs, something he is growing a reputation for in GIA.

“I don’t think I’ve ever played in a rivalry like this,” Cisse said. “I played a rivalry before, like when I was at my old school, like Memphis and Houston. It wasn’t a rivalry. But like, today, today was fun. I really had fun. I haven’t had fun like this in a game in so long.”

Tanner Groves started hot for the Sooners, scoring 10 points in the first 10 minutes of the game. He hit two 3s during that time, forcing Mike Boynton to switch some things up.

OSU started switching the defender guarding Groves during ball screens. It put some of OSU’s guards in tough positions guarding the 6-foot-10 center, but after having 10 points in 10 minutes, Groves had 10 points in all of the second half. He still got his, scoring 23 points on 17 shots, but OSU’s length made for some tough entry passes, which played a part in the 11 second-half turnovers the Sooners were forced into. It took good team defense from the Cowboys. Whichever undersized soul got switched onto Groves fronted him and relied on help from Cowboys swarming on the backside.

It wasn’t a perfect science for how to stop the Sooners’ leading scorer, but the adjustment slowed things down enough for the Cowboys to scrap out a win.

“The adjustment you make is to switch and try to allow them to have to play a little bit more one-on-one,” Boynton said. “I thought the key to us executing was Moussa’s length, when he did switch, of taking away their vision so they couldn’t make easy passes inside, and our guys on the back side were loading up a little bit. I don’t think it hurt us as much if we would’ve stayed with allowing him to catch and shoot 3s and hit those cutters on the backside.”

For what I believe was the first time this season, Tyreek Smith played the power forward, sharing the floor with Cisse or Boone.

A sparkplug, Smith’s two points won’t woo anyone, but he provides and energy that’s hard to pin down to the stat sheet. He finished with two points, two rebounds, two blocks and a steal in 10 minutes. He was +9 in plus/minus, tied for second-best on the team.

This clip says all you need to know about Smith.

The Cowboys turned up the defensive intensity in the second half, and the Sooners had little answer for it.

It was a bit of a throwback to the defense OSU started the year playing. Baskets weren’t easy. Dribbling wasn’t easy. The Cowboys made the Sooners work for everything they got. It was ugly basketball at times, but that might be the type OSU needs to play down the stretch.

“It was something we talked about coming into the game,” Boynton said. “Over the last three weeks, we’ve gotten better offensively. The numbers would tell you that. Obviously we’ve gotten more production out of Bryce Thompson and different guys, but our defense has kind of taken a step back. If we could put our first half of the year’s defense with some of our late offense, then we’ll have a chance to run off a couple of these here.”

With ice on the roads and no postseason to play for, 11,215 people came to Gallagher-Iba Arena on Saturday, and the Pokes took advantage of it.

This game doesn’t get OSU any closer to an NCAA Tournament appearance (though it does get the Sooners further away from one), but it could’ve been a season-salvaging win. OSU fans had fun in GIA on Saturday. Already a game under .500, a loss to your in-state rival in front of that crowd could’ve done a lot more damage to the program than the good Saturday’s win did. It’s a game the team can build off and an experience the fanbase can build off.