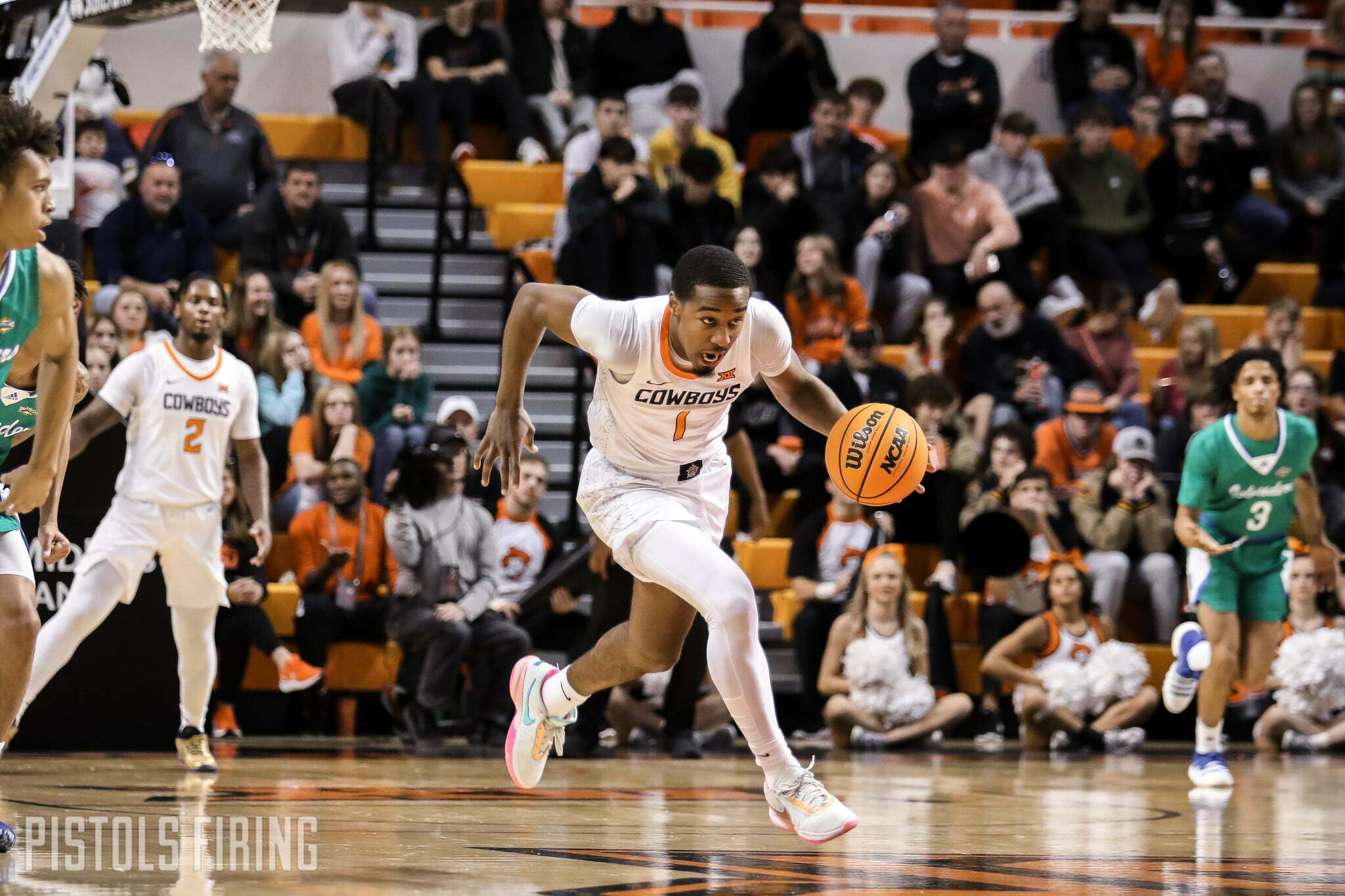 The Cowboys certainly made the Jayhawks work for it, but the Pokes start Big 12 play with a loss.

Oklahoma State lost to Kansas 69-67 on Saturday in Allen Fieldhouse after the Cowboys took at 15-point lead into the half. That lead evaporated almost instantly in the second half, and after a crazy final minute, the Jayhawks were on top when the dust settled.

There was a bit of controversy at the end of things. With 1.1 seconds to play and OSU down 69-67, Mike Boynton drew up a baseline inbounds play where the OSU faithful will say Bryce Thompson got fouled and should’ve been at the foul line with a chance to tie.

Kansas made the Cowboys’ lead disappear with work on the glass.

A former Jayhawk, Bryce Thompson did everything he could to take a win back to Stillwater.

He finished the game with four fouls and had to sit for a stretch of the second half, but he kept the Cowboys in it, hitting two 3s in the final two minutes.

The first came out of a timeout and gave Oklahoma State a 64-62 lead with 1:48 to play. It was a well-designed play from Mike Boynton, as the Cowboys needed something after hitting only one field goal in about a five-minute span.

Then in the wild final 15 seconds, Thompson nailed a heavily contested 3-pointer to tie the game at 67 before KU raced down the floor and KJ Adams got a contested layup to fall to put the Jayhawks back up.

3. John-Michael Wright Has Best Game as a Poke

For the first time this season, OSU lost a game in which John-Michael Wright scored in double figures.

Wright finished the game with 19 points, a season-high since transferring to OSU from High Point. He was 4-for-9 from 3 and had four rebounds and three assists. Perhaps his biggest bucket of the day came with 7:58 to play when he pulled up from 3 and tied the game at 55.

As good as his day was, he had a wide open look from 3 with 25 seconds to play that rimmed out. Had that gone in, it would’ve given Oklahoma State a 67-65 lead.

OSU needed Thompson and Wright to have the days they had because Avery Anderson and Kalib Boone just didn’t have it on the offensive end Saturday.

The senior tandem combined for four points on 2-for-9 shooting — not ideal production from two players who entered the game scoring in double figures.

The two did leave their fingerprints on the game in other ways. Anderson had three rebounds, two assists and tied a game-high two steals, and he followed Grady Dick nearly everywhere on the defensive end of the floor. Boone led the Cowboys with eight rebounds. But when it came to putting the ball in the basket, it just wasn’t their game.

Going into a game against the defending national champs in Allen Fieldhouse, some OSU fans might’ve taken a 2-point loss, but how it came made it sting.

The Cowboys have now blown three double-digit second-half leads (13 points to Southern Illinois, 15 points to UCF and 15 points to Kansas). The Jekyll and Hyde halves continue. It felt inevitable that Kansas would make a second-half run, but to go from 15-point lead to 2-point lead in less than seven minutes was wild.