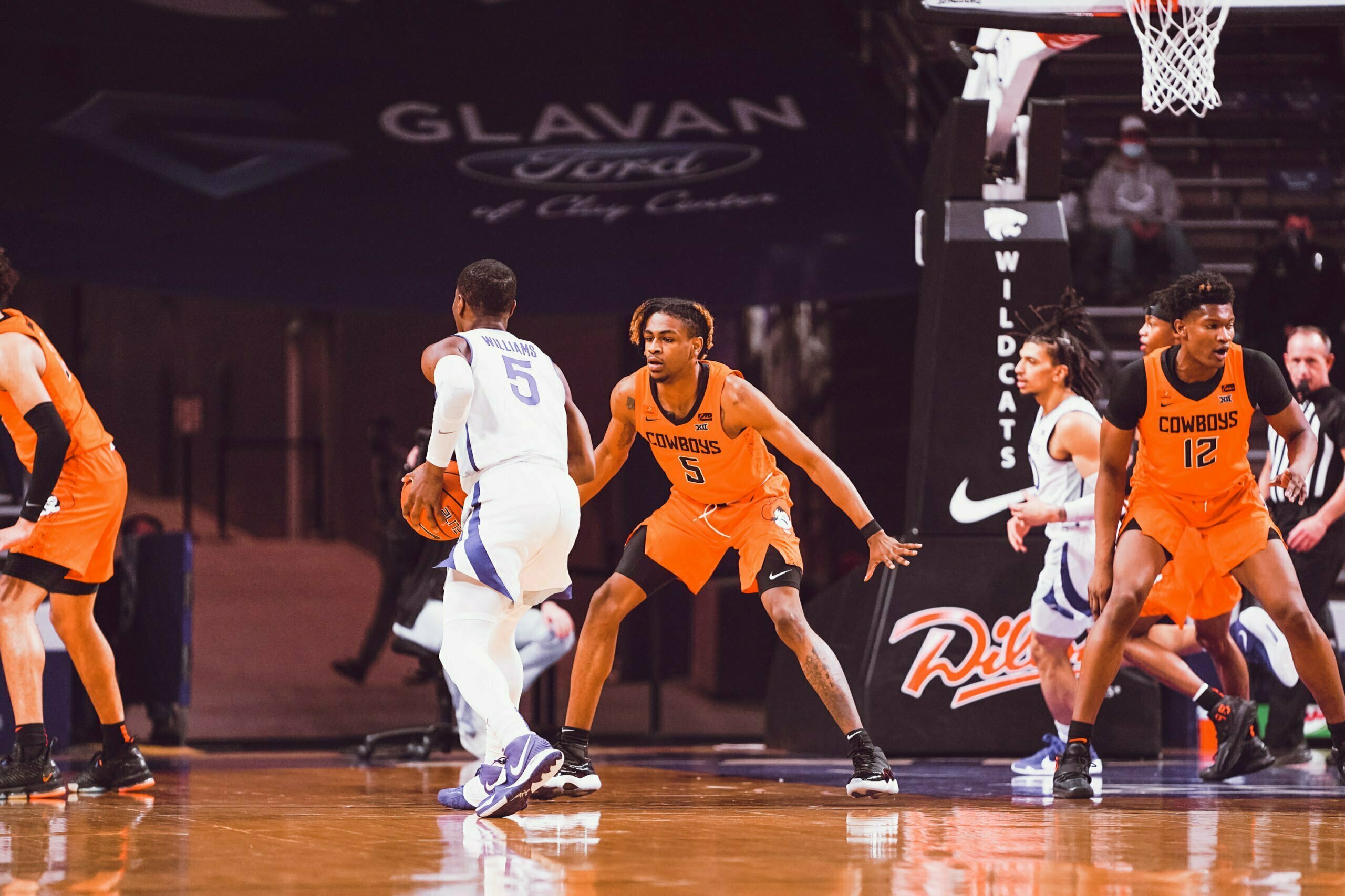 The Cowboys started slow against a shorthanded Wildcats team, but caught fire late in the first half before spontaneously combusting midway through the second.

Oklahoma State heads home from the Little Apple with that elusive second Big 12 win. Here are my Five Thoughts on it.

Despite a handful or disappointing losses to start Big 12 play, the Cowboys are an impressive 5-1 on the road overall so far this season. For reference, OSU was 5-7 all of last season on the road and was 5-17 combined as visitors in Mike Boynton’s first two seasons.

But teams all across the league are enjoying success on the road. With OSU’s win at K-State, Big 12 teams moved to 16-8 on the road in conference play. You’ve got to think the COVID-emptied arenas play a significant factor in that. It’s still fairly early but it will be interesting to see if that continues throughout the season.

That’s not to diminish the Cowboys’ road wins, but it might signal a leveling of the playing field both ways, possibly another unforeseen side effect of the new pandemic world we live in.

2. Rondel Walker is a Spark Plug

If his shots aren’t falling, he’s getting steals. If he’s not getting steals, he’s playing good on-ball defense and getting deflections. On Saturday he was doing all of the above.

The OKC native shared a lead in Cowboy scoring with 15 off the bench, making more clear one thing: He can make plays on both ends of the court. He affects the game with more than just his length. He’s a pesky defender with a nose for the ball and penchant for paying it off on the other end.

Just 11 games into his college career, Walker is a baller. He makes winning plays and will only get better. He’s the type of player that may stick around for three years but he also might just help you contend for a Big 12 title in a couple of them.

Mike Boynton would never admit to it, but maybe the Cowboys should try to come out slow against Kansas.

I type that with tongue planted firmly in-cheek, but when the Cowboys have gotten off to quick starts, they seem to hit scoring droughts in the second half. Tonight they didn’t and they didn’t.

OSU made its final 13 field goal attempts over the last 13 minutes of the game, with only one of them coming from the Big 12’s leading scorer (Cade made just one shot from the field on the night).

OSU’s blue-chipper is so smooth and seemingly effortless in his game that he rocks you to sleep. That’s why when he was 0-for-2 from the field and had just two points at halftime I fully expected a finish somewhere in the neighborhood of 17 points on eight shots.

But the points never came and he didn’t even attempt a shot (his only bucket) until there was less than five minutes remaining with the Cowboys in firm control of the outcome. He finished with his first game under double-digit scoring in his short college career.

The bright side? OSU didn’t need Cade to beat a hapless K-State squad short several rotation players. But the question that lands somewhere between intriguing and concerning (for me) is can/will he “turn it on” when he needs to? That’s probably a little hot-takey but I really wanted to see No. 2 put his imprint on this game and bury the Cats in the second half. Again, the Cowboys didn’t need him to tonight, but they will need that in their next two games.

To that point, let’s temper our enthusiasm just a bit. Kansas State is not a good team and it was without five rotation players, thanks largely to COVID issues, including two of its two five scorers in Nijel Pack and Kaosi Ezeagu.

And even closer to full strength the Cats had lost three-straight in conference and were 5-7 with a loss to Div. II Fort Hays State earlier this year.

The point is that there will be little time to celebrate this win.

The Jayhawks are coming to Stillwater on Tuesday and then the Sooners — who got very close to winning in Allen Fieldhouse tonight — will be in GIA next Saturday. It will need to be all hands on deck for the next two, especially Cade’s.