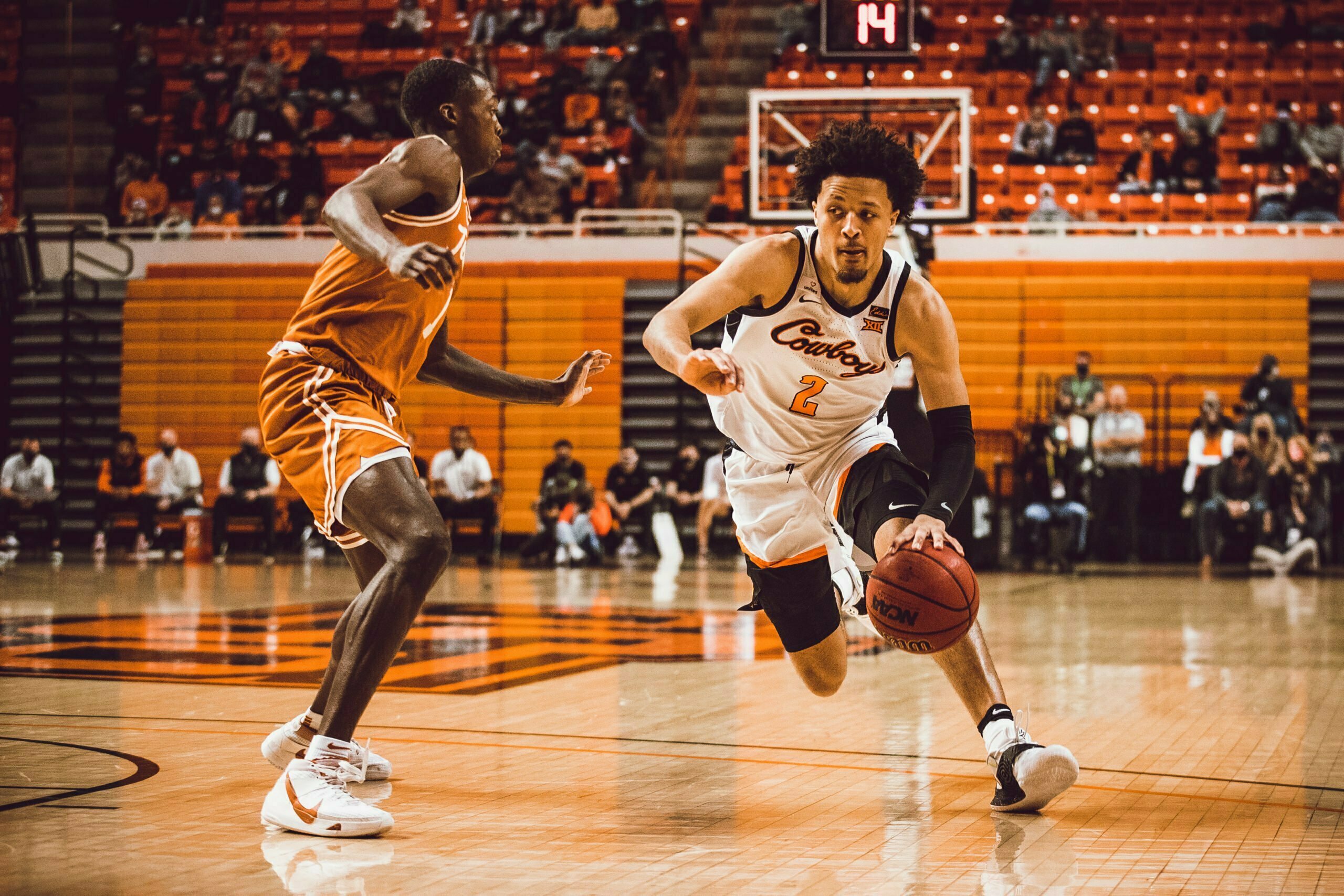 For the sixth time this season, the Cowboys played in a game that was decided by a basket or in overtime.

Oklahoma State defeated Texas 75-67 in double overtime Saturday. It’s the second time this season the Cowboys have won in overtime and the second time in a month the Pokes have beat the No. 6 team in the country.

Here are five thoughts from another wacky game in Gallagher-Iba Arena.

1. OSU Had No Business Winning, Which Is Scary

The Cowboys were offensively inept for portions of that game.

The team’s star, Cade Cunningham, finished 5-for-22 from the field. The group was without starter Matthew-Alexander Moncrieffe after he suffered a foot injury in practice Friday. OSU turned the ball over 22 times. Texas got 22 offensive rebounds. OSU scored only three field goals in the first 10 minutes of the second half.

And the Cowboys beat the No. 6 team in the country.

The Cowboys won with defense, a staple in OSU’s basketball lore. After TCU made 49% of its shots against OSU on Wednesday, Texas went 20-for-79 (25%) from the field Saturday.

It makes you wonder just how good this team can be if the Cowboys can get a few more things clicking. It’s getting late in the year, but if OSU can play defense like that, have Cunningham going, limit turnovers and get a few guys healthy, this team is going to grow more terrifying as the days go on.

“I think we can beat anybody in the country, and I’m not saying that in a naïve or arrogant way,” Boynton said.

You can usually tell how Kalib Boone’s game is going to go based on the first few minutes.

He scored four of OSU’s first six points and six of the Cowboys’ first 10 on Saturday. Needless to say, Boone played well.

The sophomore center finished with 22 points, 15 rebounds and five blocks, all career-highs. He also picked up two fouls in the first nine minutes of the game, something that has been a killer of his games, but he was able to finish 41 minutes on the floor (another career-high) with four fouls.

Without Moncrieffe, OSU coach Mike Boynton said he made a concerted effort to get Boone involved early in hopes that would lead to a good game. Against TCU on Wednesday, Boone scored one point in the first half and picked up a pair of early fouls. He finished the game with just one point and three rebounds.

When Boone has that early confidence, his post offense is a thing of beauty.

In the second overtime, Boone had three rebounds and three blocks, all while balancing his four fouls.

“Now, what we’ve gotta do at some point is get him to not be able to start the game great and still play well,” Boynton said. “That’s the ultimate sign. You just can’t be all or nothing. And he’s still growing.”

Cade Cunningham had the worst offensive game of his college career Saturday.

Then he hit a step-back 3 in the second overtime that essentially put the game on ice.

Cunningham finished 5-for-22, his lowest percentage of the season by far, for 19 points. His line finished with eight rebounds, two assists, four fouls, six turnovers, a block and two steals.

It didn’t seem like his night, but he found a way to trudge through it and help his team win.

“The most important thing for me is that he still took 22 shots because that’s what really good players do,” Boynton said. “You got to understand, he doesn’t play for his percentages. Sure, he would have rather shot better, but he, for the most part, tried to take the right shots. He played in attack mode.”

The sequence that encapsulated Cunningham’s night came at the end of the first overtime. With four seconds to go and the game tied, he turned the ball over near the baseline.

Cunningham then guarded the Longhorns’ inbound pass like his life depended on it, effort unusual for a presumed No. 1 pick. He stole the inbound pass before it even got to a Texas player, but he rushed a spinning layup attempt with the clock ticking and missed.

“I know at the end of the game, the team wants the ball being my hands, and I try to make plays,” Cunningham said. “I’m not gonna shy away from the moment — even if you know the time before didn’t go right. I’m feel that would be cheating my team.”

4. Explaining Offensive Rebounds … to an Extent

There were many times Saturday when echoes of “Rebound!” would ring throughout the crowd — if only it was that easy.

Texas snagged 22 offensive boards, tying for West Virginia for the most OSU has given up all season. The Longhorns converted those rebounds into 17 second-chance points, each causing the GIA crowd to grunt in anger.

The Cowboys primarily played their 2-3 zone against Texas. Zones make rebounding difficult. There might be four offensive players on one side of the floor with three defenders to block them out.

Defenders also don’t have a set person to box out like they do in a man-to-man defense. They have to go find somebody and then hope someone else didn’t find that same somebody.

Boynton had to take the good (holding Texas to 25% shooting) with the bad (giving up 22 offensive boards). There were times when Cowboys got caught watching, but parts of Texas’ offensive boards can be attributed to the Cowboys playing a zone.

Most years, a short turnaround to Allen Field House would be a death note, but this year, it could be a season definer.

After 50 minutes of action, the Cowboys head to Lawrence for a Monday night meeting with Kansas in a game the Cowboys might be favored in.

KU has lost five of its past seven, dating to OSU’s 75-70 victory against the Jayhawks in Stillwater.

The Cowboys enter the game having won five or their past seven, including two wins against top-10 teams.

OSU will almost certainly be in the AP Poll on Monday for the first time since the 2014-15 season, when Le’Bryan Nash and Michael Cobbins were hanging on the rim and Mitchell Solomon was a freshman.

A win against the Jayhawks on Monday could also all but lock up the Cowboys making their first NCAA Tournament under Boynton. It could also plant the once heralded Jayhawks on the bubble.