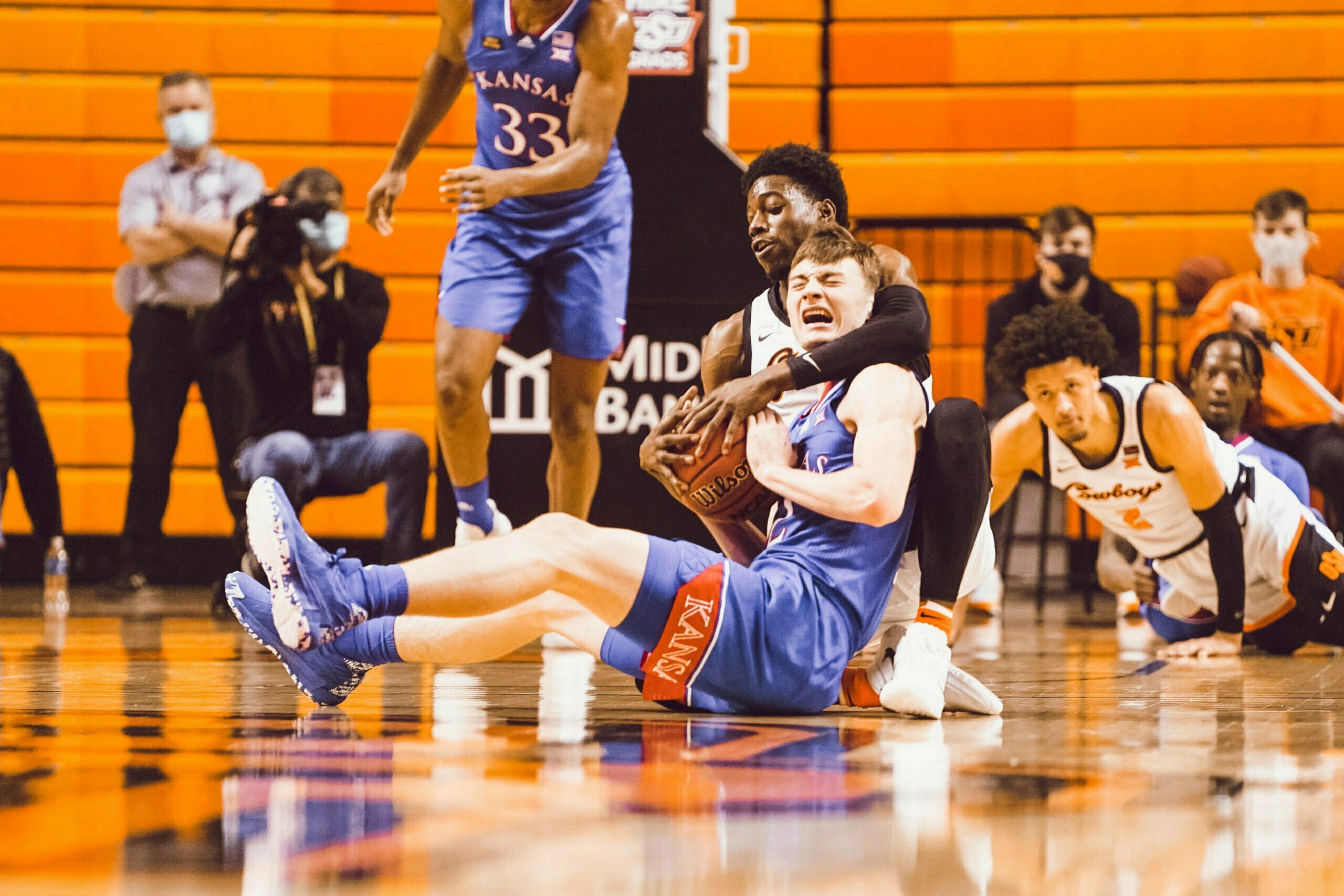 Oklahoma State topped No. 6 Kansas 75-70 after getting a lead, blowing a lead and rescuing said lead. The Cowboys advance to 3-3 in Big 12 play. Here are five thoughts from Tuesday’s contest.

PTSD started hitting midway through the second half as KU went on a run and the Pokes’ lead began to evaporate.

OSU’s offense was stalled for five minutes before Isaac Likekele hit a 3-pointer to tie the game with 1:02 to play. That’s the same Isaac Likekele who was 9-for-39 on 3-point attempts in his first two years of college basketball. He is 6-for-12 this season, OSU’s highest percentage. KU sagged off him and dare him to hit it, and he did.

From there, the Cowboys played ferociously, seemingly winning every 50/50 ball and sliding across Eddie Sutton Court to ensure what happened against TCU, Texas and West Virginia didn’t happen against KU.

Cade Cunningham, not necessarily known for his defense, had a game-saving help block before jumping over the baseline to throw the ball back inbounds. It led to a Rondel Walker game-winning and-one.

The Cowboys then took to the ground again on KU’s next possession getting a steal. Then when KU had a chance to tie, Bryce Williams sealed it with another late-game steal.

It wasn’t a pretty last few minutes, but the Cowboys fought and clawed and probably got a good amount of court burn to ensure that what has happened three times in Big 12 play didn’t happen a fourth.

Cade Cunningham’s stat line against Kansas State from this weekend won’t pop off the page, but it sure did Tuesday.

After taking just three shots against the Wildcats, Cade Cunningham came out hot against KU, scoring 14 points on seven shots in the first half. He also had five rebounds and three assists entering the break.

Bill Self did everything he could to ensure Cunningham didn’t put up similar numbers in the second half, but the projected No. 1 pick of the 2021 NBA Draft managed to finish with 18 points and seven rebounds. He also had that big block in the final minute.

This might’ve been the biggest stage Cade has been on thus far in his basketball career, even if the game was just on ESPN+. But against the No. 6 team in the country, against a historically good college basketball team, Cunningham looked the part of a future NBA star.

3. The Intricacies of a Fast Team Playing Slow

Mike Boynton’s teams have been at their best when they are playing fast, but playing fast while trying to defend a lead can be a little counterintuitive at times.

In the first half, KU was doubling Cunningham every chance it got, but Cunningham was able to do his damage when OSU pushed the ball up the floor and not allow the Jayhawk defense to get set.

Then in the second half, trying to defend a lead, KU actually zoned OSU, and the Pokes didn’t respond well to it. KU’s zone was a big part of the Jayhawks’ 21-2 run. And the Cowboys kept falling right into it.

Mike Boynton said postgame that he thought KU being able to set up its defense was more on OSU’s defense for allowing KU to score and get back, and that’s probably true. But there were still a few times I felt OSU could’ve pushed the ball and didn’t.

It makes sense. You’d look foolish if you had a double-digit lead and put up a bunch of shots early in the shot clock that missed and gave Kansas more opportunities to comeback. But you still want to do what you do best.

It’s a cat-and-mouse game that hindsight will always have the right answer to. I’m not sure there is a solid correct answer for it in the heat of the moment.

4. The Best Prospect from Oklahoma

A lot was said last year about Oklahoma’s best 2020 prospect leaving the state to play college basketball, but he didn’t. He is at OSU.

Bryce Thompson was the No. 21 player in the 2020 class, and Walker was No. 102. But in this particular instance, the rankings were wrong.

It is of note that this was Thompson’s first game back from a back injury that saw him miss all of KU’s 2021 games to this point. So simply comparing the first time these two met in college isn’t fair, but in just looking at their seasons thus far, a lot of people should take Walker over Thompson in some sort of schoolyard draft.

Thompson played 13 minutes Tuesday, where he scored two points and brought down two boards. He apparently broke a finger in a late scrum, so after getting off the injury list he might be going back on, which stinks.

But again, with Thompson just coming back from injury it isn’t fair to point to this one game as to why one would be better than the other. But here are their season stats thus far:

Walker put up a pair of ugly 3s, but he scored an and-one with 38 seconds to play that ended up being the game-winning bucket.

There were two occasions where Avery Anderson ate Thompson alive in the first half. One resulted in a five-second call. The other, just a possession or two later, probably should have, but Thompson got bailed out with a foul call.

KU fans might argue, “Well yeah, Walker plays at OSU. Of course he is getting more opportunities.” Well, OSU proved it was the better team (or at least a similar team) Tuesday than KU.

Both guys will do the state of Oklahoma proud in the coming years, and it’s awesome that Oklahoma high school basketball is at this point. However, give me the guy who was 81 spots behind the other in the composite rankings.

5. Bryce Williams Is the Truth

It is malpractice that Ole Miss was unable to successfully use Bryce Williams because he can do everything.

On top of scoring career-high 17 points against KU (his sixth double-digit game of the season), Williams grabbed his second walk-off steal of the year after sealing OSU’s overtime win against Texas Tech.

It was one of three steals Williams had against the Jayhawks. One ended in a thunderous windmill because he is OSU’s most athletic player.

Then on the game-sealing steal, Williams had the cojones to bounce a self-oop to himself instead of running out the clock.

How the heck did Ole Miss let this kid slip away? After spending two seasons at Daytona State, the Rebels snatched him up for last season. On an Ole Miss team that went 15-17, Williams started two games. TWO?? He averaged 3.1 points and 0.6 steals a game.

There are spurts where he looks like an NBA player, and Ole Miss played him 13 minutes a game.

His season averages in Stillwater are up to 8.5 points a game, and he is leading the team with 1.5 steals per contest.