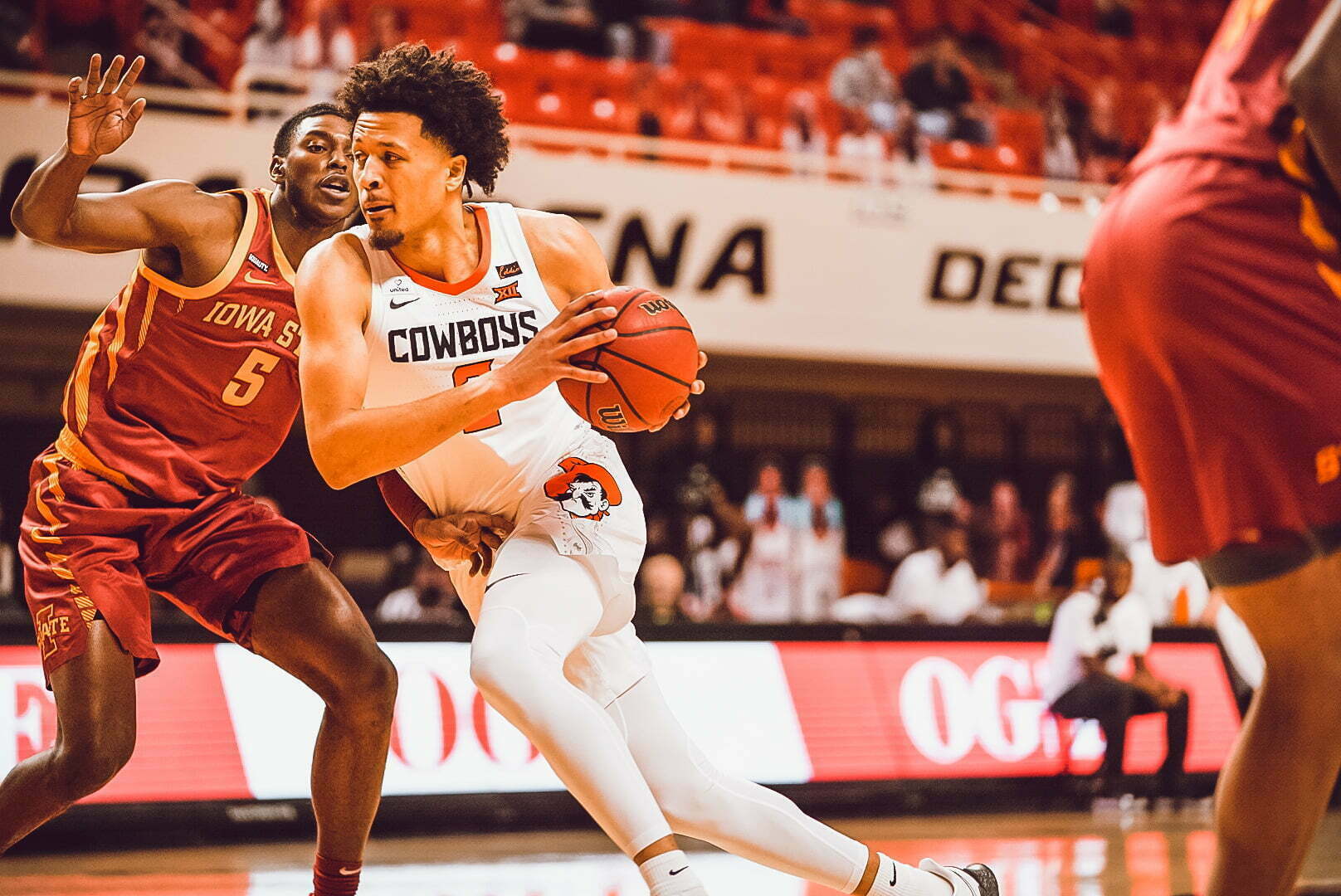 For the first time in a long while, the Cowboys have a winning record in conference play.

Oklahoma State beat up on Iowa State 76-58 on Tuesday in Gallagher-Iba Arena to advance to 7-6 in Big 12 play this season. Here are five thoughts on the game.

The recent stigma around Cade Cunningham is that he isn’t aggressive enough at the start of games. He hushed some of that talk Tuesday.

Cunningham scored 15 points in the first half against Iowa State, going 6-for-8 from the field and 3-for-4 from 3-point range. He controlled the game from every aspect early on, adding four rebounds, four assists, a steal and a block to his first-half line.

Cunningham finished with 21 points (on 12 shots), five rebounds, seven assists and three steals. He was also a game-best plus-16.

His “slow” first halves have probably been overanalyzed at times this season. It doesn’t look as bad as it seems when you look at the numbers. Still, it was impressive to see him jump on a team that entered 0-11 in conference play and smother any real hope the Cyclones had.

In his postgame presser, OSU coach Mike Boynton touched a little bit on people expecting so much from Cunningham this season and how he is somehow living up to those lofty expectations.

“I think we’re missing out on an opportunity to really appreciate a really talented young kid who isn’t going to be in college for a long time,” Boynton said. “And I get it, everybody wants to see him score 40 and maybe have 15 assists at the same time. He’s having a hell of a year and doing it when everyone expects him to, when everybody’s giving him their best shot defensively. For the most part, he shows up and performs at a pretty high level every night.

“He’s not always as efficient as he was today. But man, if somehow we can just step back for a second and understand that there’s a 19 year old out there in a lot of ways dominating college basketball games without people even noticing, it’s pretty impressive.”

2. It’s All about the Ratio

The Cowboys had their best assist-to-turnover ratio of the season Tuesday, and it came off the back of a ridiculous spree of high-turnover games.

OSU had just 13 turnovers against Iowa State. It’s the fewest the Pokes have had in a game since the 12 they put up against West Virginia on Jan. 4.

On top of that, the Cowboys eclipsed 20 assists for just the second time this season. That #maths for a 1.54 assist-to-turnover ratio, the Cowboys’ best of the year by a nice margin.

Cunningham led the Pokes with seven assists. Avery Anderson added another five, and Rondel Walker and Bryce Williams each had three (Kalib Boone and Ferron Flavors split the other two).

OSU’s offensive output in the first half looked like an NBA All-Star game. In the first minute, Anderon threw a lob to Boone, who jammed on Rasir Bolton.

Cunningham was providing assists for Boone dunks, and it also helped that Rondel Walker hit three 3s off Cunningham dimes. Guys were hitting open shots, running the floor and not playing out of control, and in the first half especially, OSU showed just how good it can be.

This was all done without Isaac Likekele, who has the Cowboys’ best individual assist to turnover ratio at 1.62 (68 assists, 42 turnovers).

Side note, OSU won a game against a Top 10 Texas team when OSU had four assists and 22 turnovers. How is that even possible?

Iowa State is a bad basketball team, the worst in the Big 12 conference, evident by the fact that Kalib Boone might still be hanging on the rim over Eddie Sutton Court.

Boone had three dunks in the first five minutes of the game. He finished with six total, the most he has had in a game in his college career. Boone finished with 15 points, meaning 80% of his scoring ended with him hanging on the rim.

The Pokes had eight dunks in total with Matthew-Alexander Moncrieffe and Avery Anderson contributing to the fun. The only dunk attempt OSU missed was when Moncrieffe came flying in backward on a put-back attempt.

Moncrieffe could’ve capped the game off with another dunk, as he had a clear lane to the basket with 20 seconds to go, but he chose to be a sportsman and run out the clock.

“I was gonna go between the legs,” Moncrieffe said after the game.

“I thought you said you was gonna go for the windmill?” Boone asked.

“I was about to do something crazy,” Moncrieffe said.

Speaking of Boone and Moncrieffe, the frontcourt pairing combined for 34 points, 13 rebounds and five steals Tuesday.

OSU has been praised this year for its guard depth, and rightly so. Cunningham, Likekele, Anderson, Williams and Walker are all starting-caliber guards. With that said, this tandem of Boone and Moncrieffe look better by the month.

The two are sharing the floor more often now, as well. It’s something that started when Cunningham was absent with COVID protocol, but it has stuck around since. It allows Moncrieffe to play his preferred power forward role and jump over a smaller defender.

“I like it better with KB in the game,” Moncrieffe said. “I get to play the four a little more, which I feel like I’m better at. So that’s what it’s done for me. Then for him, I feel like when Cade went out, KB had to be a little more aggressive, which got him in this groove.”

Another sign of the group’s growth was how it handled Iowa State big Solomon Young. Boone in particular has struggled with big-bodied bigs this year, and the 255-pound Young is just that.

Young torched OSU last season, putting up a career-high 27 points on the Cowboys in Ames. On Tuesday, Young was held to just six points, four of which came at the foul line.

Barring another schedule change, it looks like OSU will be off until Monday when it hosts Texas Tech after Baylor had to postpone Saturday’s game because of COVID protocol.

Baylor has to reschedule a ton of games, so who knows if OSU will get that game back? Apart from OSU maybe not having to play the No. 2 team in the country a second time, this extra time off gives Isaac Likekele more time to heal up.

Likekele missed his second straight game Tuesday as he recovers from a nagging foot injury.

Going into the Tech game Monday, it will have been a full two weeks since Likekele has played, a good sign for OSU.