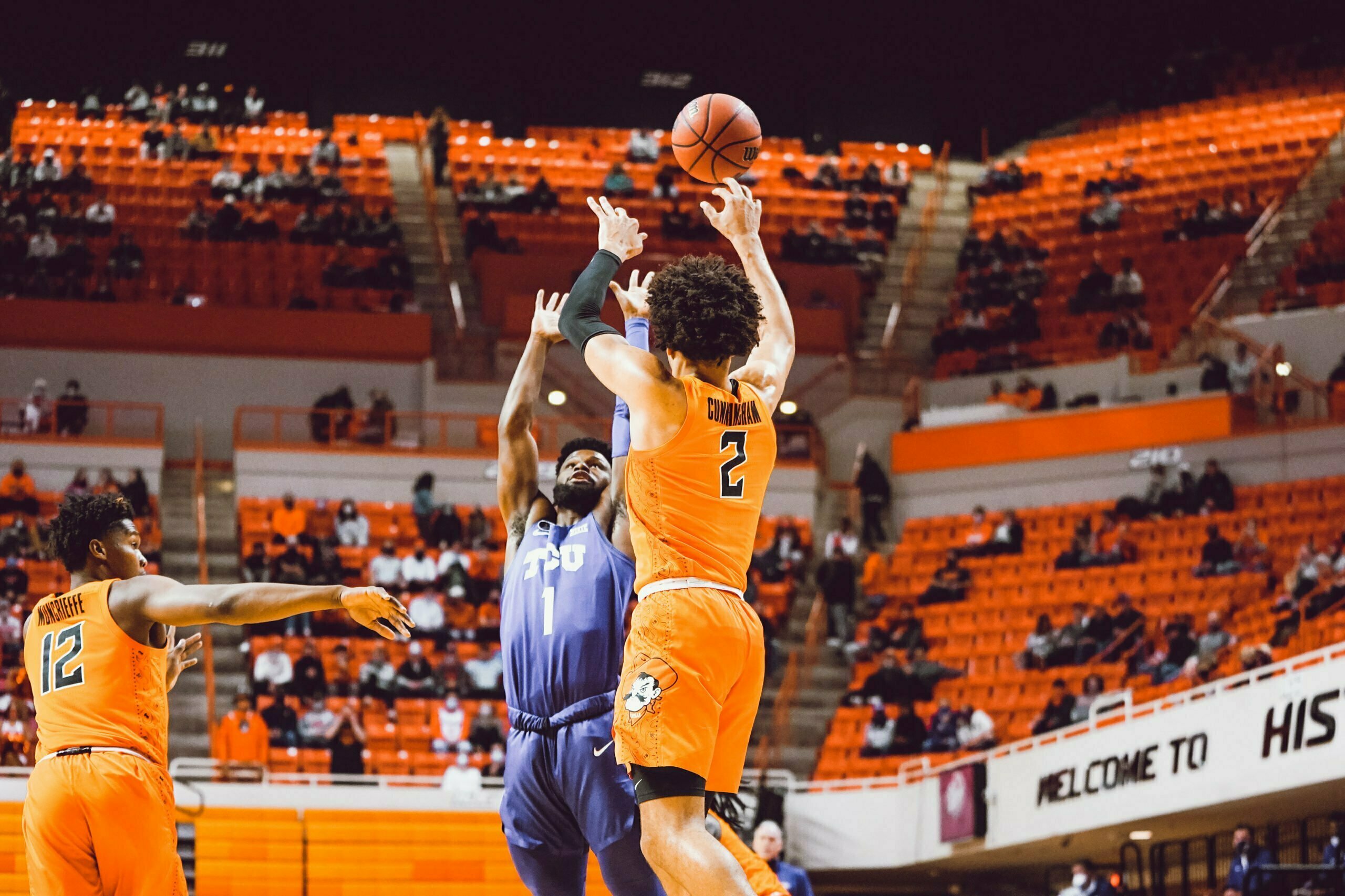 The Cowboys have flirted with tight games all season, and it came back to bite them Wednesday.

Oklahoma State fell to TCU 77-76 in Gallagher-Iba Arena in a game where it had a 9-point lead with with under three minutes to play. The Cowboys have been in tight games galore in their 6-0 start, so it felt like they were always going to pull through … until they didn’t.

Here are five thoughts from Cowboys’ first loss of the year.

A lot of OSU fans will be mad the officials didn’t call a foul on this Bryce Williams drive in the final 30 seconds:

But Pokes fans should probably be more mad about the final 2:03. TCU finished the contest on a 9-0 run after the Cowboys fought to a 76-68 lead with 2:21 to go. That’s when everything fell apart.

Nembhard hit his third 3 of the night with 2:03 to go. Samuel then hit a pair of free throws. He entered the game shooting just 59% from the stripe.

Mike Boynton then subbed out Kalib Boone, putting Isaac Likekele on the 6-11, 255-pound center, and on TCU’s ensuing possession, Samuel posted Likekele up and finished the possession with a dunk.

Then came the Williams’ drive and no call above, and Nembhard scored his 20th and 21st points to secure the win for TCU.

It was the type of collapse one could probably expect for a team that had six guys playing in their first Big 12 game.

It’s the fourth time in four seasons Mike Boynton’s squad has started the conference slate with a loss, which isn’t great.

Even with the 9-0 run TCU had to end the game, that shouldn’t have been enough.

OSU went a woeful 12-for-20 from the foul line in the second half. That’s 60%. In practices (when I could actually go), the team strived to shoot at least 75% from the foul line. With 20 attempts at 75%, OSU would’ve made 15 second-half foul shots and won the game by a bucket even with the late collapse.

It wasn’t all on one guy — Cade was 5-for-8, Likekele was 2-for-4, Rondel Walker was 2-for-4 and Bryce Williams was 1-for-2. Kalib Boone was the only guy to shoot at least 75% from the stripe in the second half, draining both of his attempts.

When Cunningham famously took his official visit to Stillwater last fall, he was flanked by a pair of AAU teammates.

One was Walker, who joined Cunningham in Stillwater. The other was Mike Miles, who had an OSU offer, but he ended up closer to home at TCU, where he has been superb in his freshman season.

Miles and OSU probably wouldn’t have worked out. He is more of a traditional point guard, and OSU already has Cunningham, Likekele and Avery Anderson.

I thought Miles would develop into a good four-year guy for the Horned Frogs, but I didn’t expect him to be this good this soon.

Rondel Walker, Bryce Williams, Avery Anderson and Matthew-Alexander Moncrieffe are absolute pests for opponents. They’re the kids in a Colvin pickup game who are trying way too hard for your warmup for intramurals.

The three guards of the bunch combined for six steals and 16 points on the night.

Walker has this innate ability to understand when energy in the gym is down before he does something wonky (in a good way) like this:

Williams might be the most athletic guy in any gym he steps foot in this season, and he plays on the same team as Moncrieffe.

Anderson has missed time this season for what is believed to be COVID. But he has a new role this season where he is off the ball more, and he is able to focus his energy all over the place.

There was quite a bit to be critical of OSU for on Wednesday night, but this group of four will be crowd-pleasers all season.

OSU was just 3-for-17 from 3-point range Wednesday night. If the Cowboys can get going in this area, it feels like this snowball can really get rolling, but it just hasn’t happened yet.

OSU has shot just 31% from deep this season. Ferron Flavors, Walker, Williams and Keylan Boone are supposed to be the team’s floor spreaders, but that group of four is a combined 30-for-106 on the year, lower than the team’s overall percentage.

There was a bright spot tonight where Flavors hit two 3s in a row. Boynton was so excited he nearly fell over trying to hype Flavors up after the second bucket.

If that group can get going, it’s going to take away the help from a driving Cunningham and Likekele and should help the offense limit its ruts, but for now, we wait.