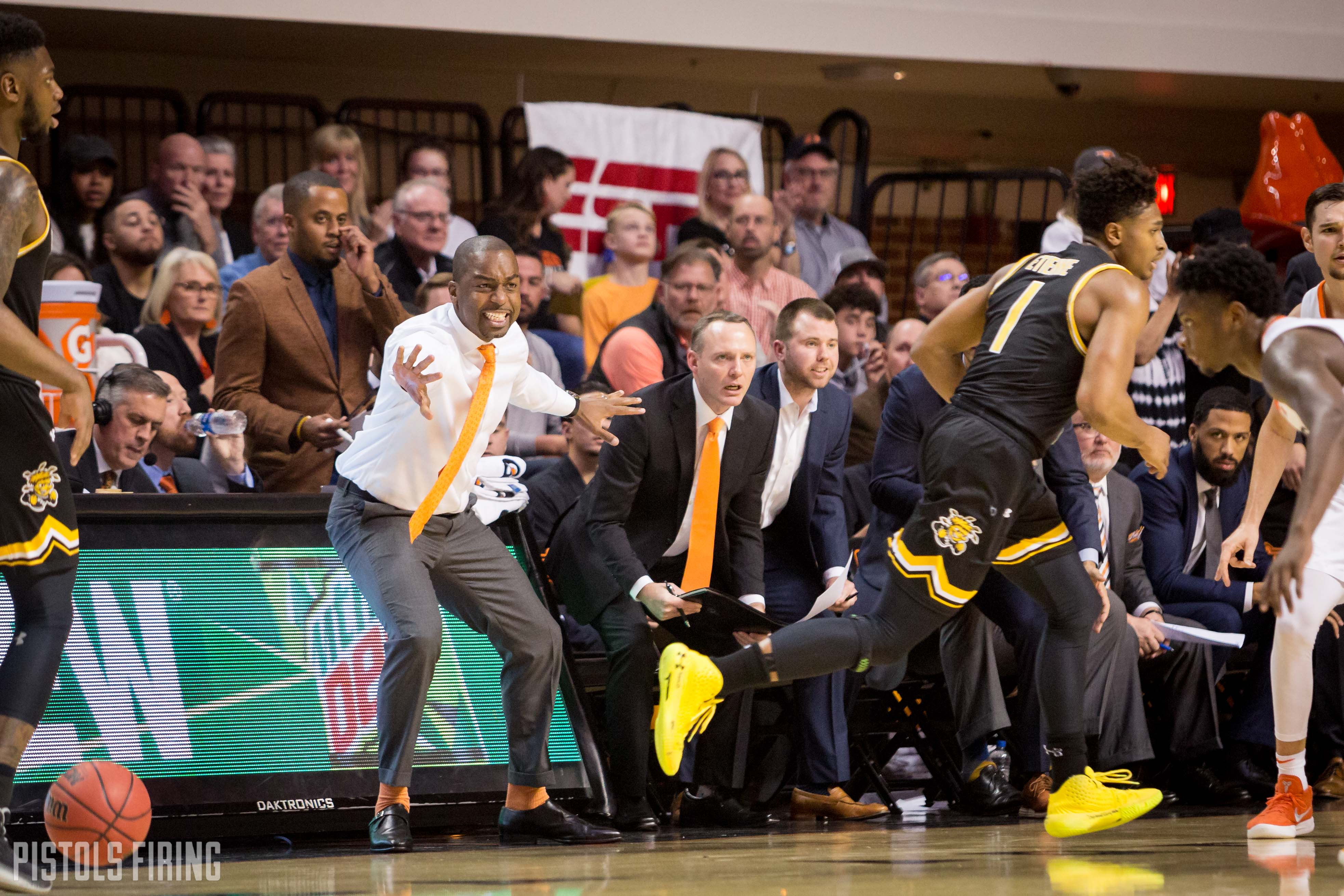 STILLWATER — Well what a difference a week makes.

Oklahoma State is on its first losing streak of the season after Wichita State pummeled the Pokes 80-61 in Gallagher-Iba Arena on Sunday. After starting the year 7-0, the Cowboys are down to 7-2 after consecutive losses.

There are a lot of ways to overreact from this season already. After OSU thrashed Ole Miss in Brooklyn, it felt like Final Four plans were being made, and here we are two games later wondering if this OSU team has what it takes to make the NCAA Tournament.

“A week ago today, people felt like maybe we had arrived, and obviously that’s not the case,” OSU coach Mike Boynton said. “We got to get back to the drawing board, but there’s a lot of room for growth from this team.”

After a competitive first half, the Shockers came out and set fire to GIA.

With Wichita State hitting its shots, the Cowboys couldn’t get out in transition, where they are most comfortable, and by the end of the run, the game was out of reach.

“We didn’t show much resistance,” Boynton said. “It starts at the point of attack. We gotta be better at guarding the basketball, just stopping dribble penetration and keeping ourselves out of rotation because a team like that, that gets some confidence and can space the floor like they do, they wound up shooting a really, really high percentage.”

It was another not great game from Yor Anei. He fouled out having played only 12 minutes. Anei was unlucky on his second foul early in the first half. I’m not sure what he was supposed to do here.

Anei sat the rest of the half after that having played only 5:42 in the first frame. He finished the game with nine points (seven of which came from the foul line), two rebounds and a block.

“His instincts take over a lot of time, which is fine” Cameron McGriff said. “You guys praise him when he blocks all the shots, but you want to kill him when he jumps for everything. Just a double-edged sword. It’s up to him. I know he’s a good enough player to bounce back and make the right adjustment.”

It’s an area the Cowboys improved upon as the game went on, as the Shockers had a 19-6 lead in the stat at halftime, but it was not ideal for the Pokes. OSU was out rebounded 42-31.

It haunted OSU on Wednesday night as well when Georgetown out rebounded the Pokes 43-29.

Wichita State, Georgetown and Yale are the only teams that have out rebounded OSU this season. The fact that the Cowboys are 1-2 in those games and 5-0 in games where they out rebound their opponents is quite a telling stat. (OSU and ORU each had 46 rebounds in their game)

“They were just more physical than we were,” Boynton said. “I’m not going to make excuses or anything. They came in here, and they took the fight to us on the glass, plain and simple.”

After the game Boynton said he talked with Likekele on Sunday morning and that he was feeling better, but the doctor’s haven’t given him the go to practice yet. And if he can’t practice, he can’t play.

As much as OSU needed Likekele on the offensive end, the Cowboys drastically needed him defensively.

Jamarius Burton was able to drive-and-kick the Cowboys into submission. He finished with 11 assists, while Wichita State’s other two starting guards, Tyson Etienne and Erik Stevenson, combined to hit eight 3-pointers.

“I think it gets overlooked a lot,” Boynton said of Likekele’s defensive abilities. “There are a lot of things that maybe people don’t appreciate about his game. I get a lot of questions about his free-throw shooting, his 3s. If I’m going in a back alley, I’m taking that dude with me every single time. The more competitive the environment, the better he is. Obviously it’s something that’s being shown that we need.”

Even with Anei spending more time in foul trouble, Kalib Boone didn’t check in until the Cowboys were down 72-44 with 9:10 to go.

Boone played well in the garbage time that he got. He scored five points and have five rebounds in his nine minutes. Four of his points came off dunks.

“I knew how physically demanding the game was going to be,” Boynton said. “The truth is guys play based off of how well they practice. He hasn’t practiced that well, and he knows it. The thing I admire is that he didn’t come in pouting. He came in and played with some fire. Hopefully that’s an opportunity for him to learn that you earn your playing time every day in practice.”

5. An Unacceptable Amount of Yellow

OSU came into the game 7-1. The Pokes won their preseason tournament, and 7,945 people showed up to GIA and a decent chunk of that were wearing yellow? Nah, that’s unacceptable.

The student section was far from great. The main excuse for that would be the upcoming finals week. I graduated two years ago. Although OSU’s sports media program might not take as much studying as an engineering degree would, I could’ve definitely found a few hours to watch a basketball game.

As for graduates/other fans, if 1,000ish people can make the two-hour trip from Wichita and combat ticket prices, you can find make the one-hour journey from Oklahoma City or Tulsa.

Not to be an #old yelling at a cloud, but rebuilding a program takes everybody. As bad as the Pokes were on the floor Sunday, the fact that OSU’s fans treated GIA like an Airbnb was just as poor.