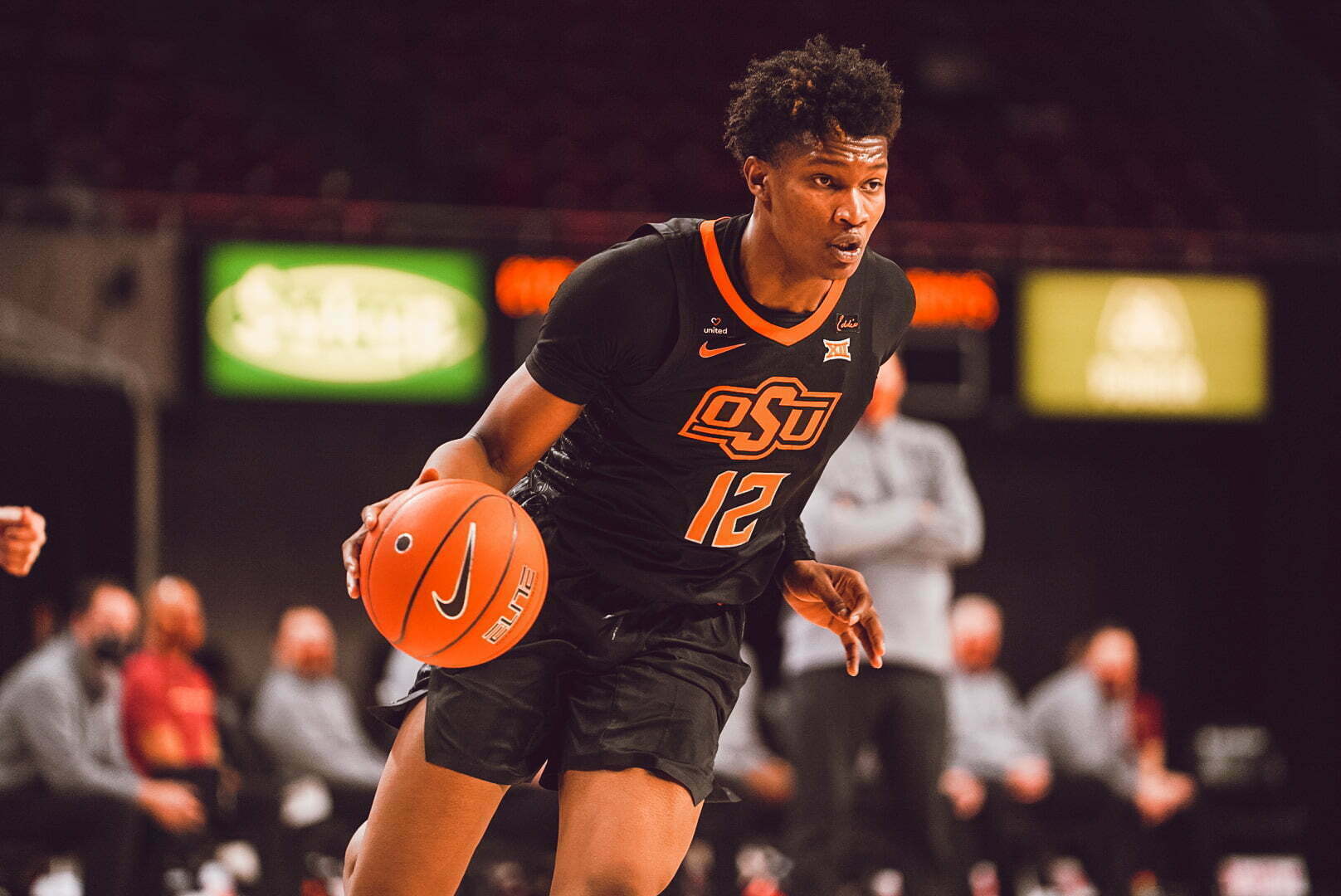 Oklahoma State beat Iowa State 81-60 on Monday night in Ames despite not having Cade Cunningham for the second straight game. Instead, Cunningham was on the Cowboys’ bench watching the Pokes put up their largest win of the season. Here are five thoughts on it.

Mike Boynton had only seven scholarship players available during the back half of the 2018-19 season, and he often said the other team wasn’t going to feel sorry for the Pokes. With the shoe on the other foot Monday night, the Pokes didn’t give much rest to the six-scholarship Cyclones.

There were stretches of the game that looked like good ole Colvin ball with guys running up and down to the point where half of the 10 players were on one end of the floor and the other five were on the other.

It ended up working out for OSU, a team that normally likes to run anyway.

OSU scored 10 points on the fast break, and with Iowa State thin on post depth, the Cowboys grabbed 13 offensive rebounds and turned them into 18 second-chance points.

Big 12 road wins are hard to come by, and though Iowa State was missing four starters, that notch in OSU’s win column will be just the same as all the others.

Moncrieffe lived at the rim Monday night en route to a 22-point, 12- rebound outing. Both of those stats are career highs. He did it efficiently, too, shooting 65% from the field.

Part of what has allowed him to blossom these past two games is that Boynton has used more two-post sets without Cunningham, meaning Moncrieffe has often been on the floor with either Kalib Boone or Bernard Kouma. This forced Iowa State to put a smaller defender on Moncrieffe who had trouble keeping him off the glass.

Six of his 12 boards were offensive with a lot of those being tip-ins.

“Just doing what my team needs me to do, really,” Moncrieffe said. “Cade’s not here, Rondel was gone last game. Everyone’s banged up, so I just gotta step up. That was my mentality, just step up and attack the offensive glass.”

Before Monday, Rondel Walker hadn’t played a basketball game since Jan. 12 — then he coolly dropped a career-high 20 points.

Walker missed Saturday’s game against Baylor with an arm injury. Boynton said he wasn’t expecting too much from his in-state freshman against the Cyclones, but he got a lot.

Walker was 7-for-12 (58%) from the field and 4-for-8 from 3-point range. He also collected a team-high three steals and was back to sliding across the hardwood with his hustle.

4. Avery Anderson Is a Bucket

There aren’t many college defenders who will have an easy time staying in front of Avery Anderson in an isolated scenario.

Anderson went straight internet mixtape Monday night and finished with 11 points, five assists and three boards. There are times when he gets a little too busy, as he did have five turnovers. But he also does stuff like this:

“In my opinion, he’s the toughest to guard on the team in a one-on-one situation,” Walker said of Anderson. “… I feel like with his handle, he can get anywhere he wants.”

And he is still only a sophomore. Senior Avery Anderson is going to be a fan favorite.

That’s quite possibly the most puzzling sentence in basketball history. It’s the most turnovers OSU has had and the lowest free-throw percentage this below-average free-throw shooting squad have had in a game this season.

What offset that was the fact that OSU scored 18 second-chance points and had 58 points in the paint.

Some of that sloppiness can be attributed to OSU being without Cunningham, the Cowboys’ primary ball-handler. But after the Cowboys’ loss to Baylor felt somewhat promising Saturday, this 21-point win didn’t look as great as most 21-point wins.