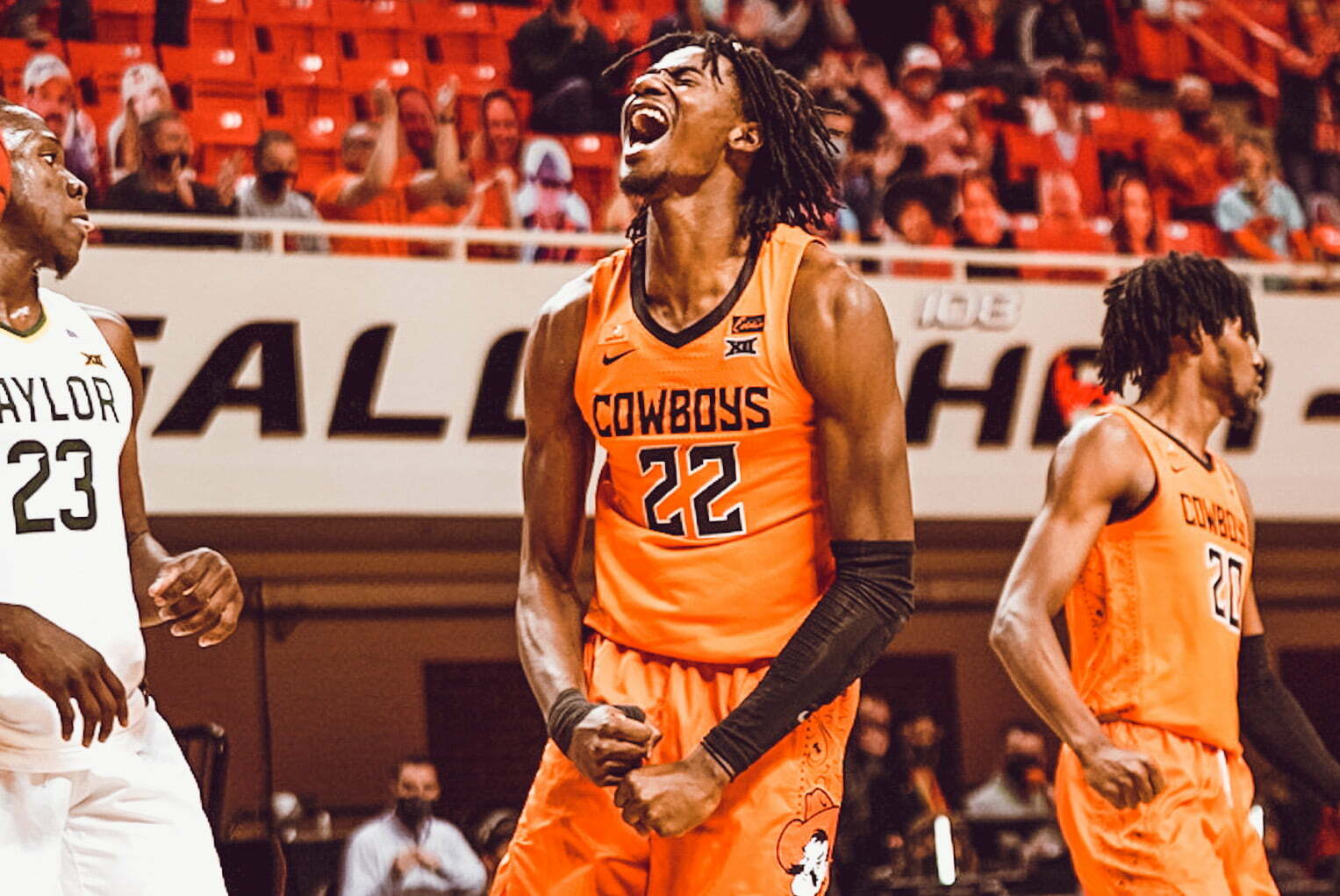 An undermanned Cowboy squad put up a fight Saturday, but Goliath won this battle.

Oklahoma State fell to No. 2 Baylor 81-66 in Gallagher-Iba Arena despite the Bears trailing at halftime. Mike Boynton had just eight players available, as Cade Cunningham and Rondel Walker were out. Here are five thoughts on the contest.

1. Not the Same Collapse

The Cowboys have had a trend of blowing leads in Big 12 play this season. Some will say those demons came back again Saturday, but it wasn’t the same.

The Cowboys were without Cade Cunningham and Rondel Walker, meaning Mike Boynton had an eight-man bench against the No. 2 team in the country. Oh, and OSU practiced Friday for the first time in a week.

OSU led 36-32 at the half, but the Cowboys ran out of gas in the second half.

Four of OSU’s five starters played more than 30 minutes. Kalib Boone, the other starter, played 28 minutes. That was a career-high for him.

Baylor had three guys eclipse the 30-minute mark, but it’s safe to say given OSU’s isolation period that the Bears were more conditioned to do so.

What started as a promising, underdog outing for OSU got ugly late thanks to a 19-1 second-half run, but given all the external factors hampering the Cowboys, I’m not ready to say the squad has regressed back to the team that blew leads against TCU and West Virginia.

“There’s no doubt that part of it is that we were gassed,” Boynton said. “We just weren’t able to sustain it. That’s not an excuse, it’s reality. To beat the best team, I think they’re certainly in a conversation being one of the best teams or the best team in the country, you got to play it for as close to 40 minutes as possible; 29 to 30 minutes isn’t going to get done.”

2. The Strangest Pregame of All Time

Walker is dealing with an arm injury, while Cunningham is going through COVID protocol.

It seems weird that Cunningham was able to warmup with it being a COVID issue, but Boynton said after the game that Saturday was the first day Cunningham was cleared for physical activities. Boynton said he just wanted Cunningham to be able to get some shots up, as he hasn’t been able to in more than a week.

The whole pregame scenario reminded me of Daxx Garman warming up in Waco in 2014 before Mason Rudolph started the first game of his collegiate career, burning his redshirt.

Boynton said it’s “50/50 at best” that Cunningham will play against Iowa State on Monday.

“Today was the first day that he was cleared for physical activity, but he couldn’t play a game having not practiced,” Boynton said. “He needed to be here, but he couldn’t play. I wasn’t gonna play him. I’m not gonna make him dress, and then be tempted to put him in when they’re making a run. I’m not doing that.

3. Kalib Boone Busts out of slump

Boone has struggled in his sophomore season, but his potential showed again Saturday. Boone entered the bout with Baylor averaging 6.7 points, and 3.8 rebounds, but he made a splash on national TV finished with 21 points and seven rebounds 28 minutes.

Foul trouble has plagued Boone this season. He finished with three against Baylor and was able to stay away from the early fouls that usually put him on the bench before he can find a rhythm. He had only played more than 20 minutes two times this season before Saturday.

As close as OSU seemed to knocking off the giant that is Baylor, the Bears were able to turn it on late coast to their 14th win in 14 games.

Baylor and Gonzaga are atop the college basketball world right now, and the gap between second and third seems fairly large.

Baylor is stiff defensively. The 66 points OSU scored were the fewest the Pokes have put up this year.

Sure, OSU was without Cunningham, but ask Isaac Likekele how tough Baylor’s defense was. Likekele entered Saturday making a ridiculous 58% of his shots this season. Against the Bears, Likekele was just 1-for-8 (13%) from the field.

Jared Butler, Baylor’s star, was also as good as advertised, finishing with 22 points on 6-for-7 3-point shooting. He scored 15 of his points in the second half and was 5-for-5 from deep.

That should feel somewhat promising for OSU that the Cowboys were able to stick around with the Bears despite missing Cunningham and Walker. It makes the teams’ Feb. 20 rematch in Waco all the more enticing.

Saturday provided a tiny glimpse at what OSU could look like in a post-Cunningham world. All of OSU’s roster can return for next season with the NCAA’s pandemic-caused eligibility waiver.

If this is the group that returns next season, OSU fans are in for a fun year. Especially in the first half, OSU was outright outhustling Baylor winning with defense and getting out and running. OSU went into halftime scoring 30 of their 36 points from either the paint or the foul line.

The Cowboys will likely be less prone to being gassed out, as well. Guys like Walker, Chris Harris, Donovan Williams and Ferron Flavors could all also be back.

The final score is important, and it wasn’t the most flattering thing to OSU. But Saturday showed that while OSU is the Cade Cunningham show this season, Cunningham isn’t the only character.