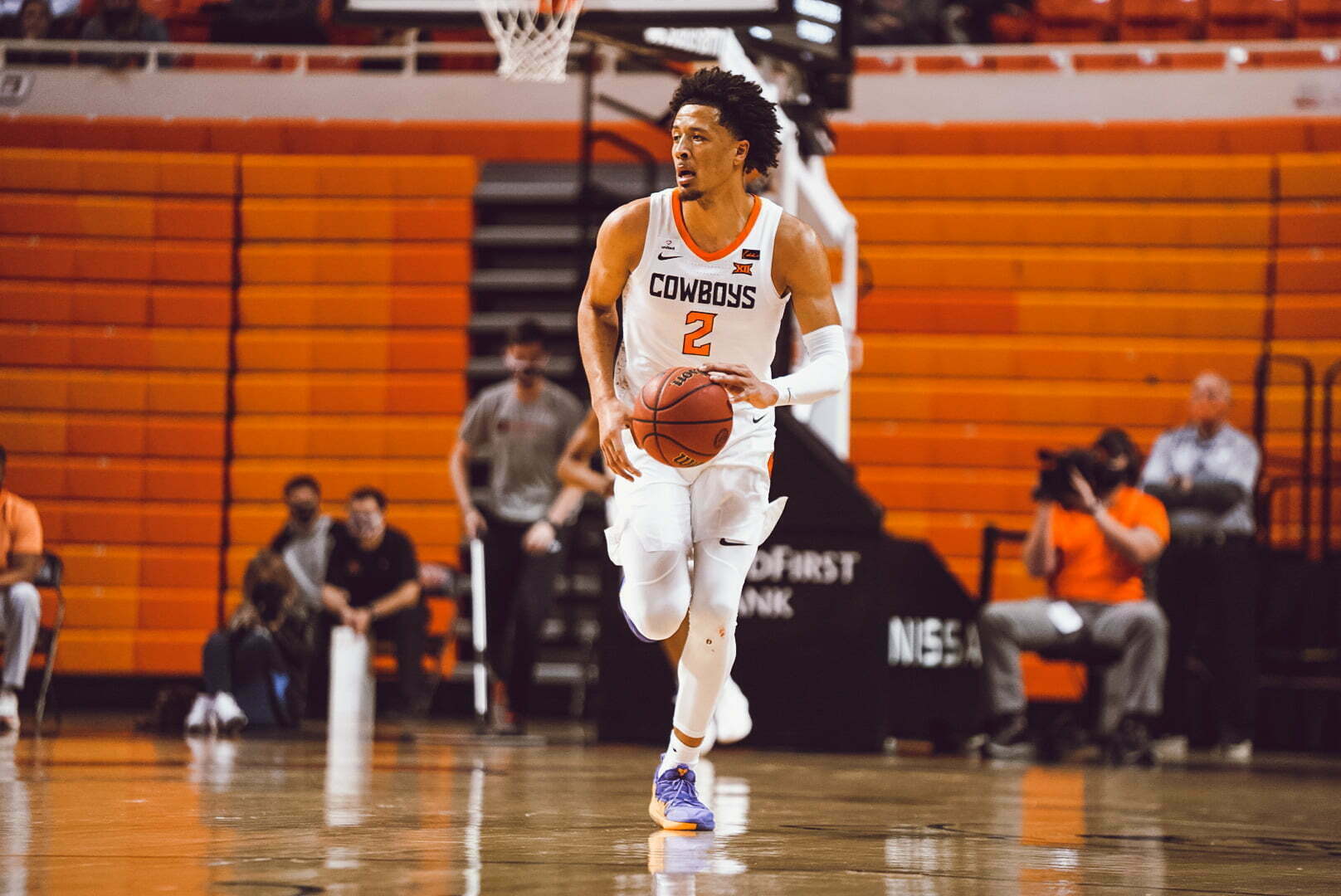 The Cowboys are 4-for-4 on blowing second half leads in Big 12 games.

Oklahoma State fell to No. 14 West Virginia 87-84 on Monday night after the Cowboys led by 19 in the second half. Here are five thoughts on the contest.

No matter how good OSU has been in the first half of its four Big 12 games this season, there has always been a run.

Monday night it was a a pair of runs. OSU had a 19-point lead with 11:15 to play before the Mountaineers went 11-0, where OSU had four turnovers. About five minutes later, West Virginia put together another 10-0 run.

This felt worse than the 9-0 run OSU gave up at the end of the TCU loss and worse than the 17-0 run in the second half of the Cowboys’ loss in Austin. It was truly dumbfounding.

Free throws were a big part of the second half. WVU came out more aggressive when attacking the basket to get Kalib Boone and Cade Cunningham in foul trouble. Both of those guys fouled out. The Mountaineers finished the second half 15-for-19 from the stripe.

Is it an inexperience thing? OSU played six newcomers Monday and was missing starting big Matthew-Alexander Moncrieffe, who is another true freshman. There are more questions than answers right now.

“Well, woulda, coulda, shoulda, right? But tonight was a night, for sure, we should have won the game,” OSU coach Mike Boynton said. “There’s no two ways about it. Play well enough for 32 minutes, and to be clearly the better team tonight. But I hope the one thing our guys take away from it is, you got to finish. It’s a 40-minute game. You got to continue to do the things that got you to lead, can’t play differently, you gotta understand that as hard as it is to win teams don’t just lay down, no matter what.”

Derek Culver was an issue.

The Mountaineers used to have two of them before Oscar Tshiebwe left the program last week, but one monstrous big was enough to slay the Cowboys. Culver finished Monday’s game with 22 points, 19 rebounds and a pair of blocks. He also helped facilitate Cunningham and Boone fouling out, as those two primarily guarded him.

As a team, West Virginia finished the contest with a 46-38 rebounding advantage. West Virginia brought down 22 offensive boards, which led to 26 second-chance points.

Most of that came in the first half, though, and OSU was able to manage in spite of it. It was a fun matchup of new-age small ball vs. the more traditional bruiser ball. The Cowboys are somewhat a hybrid small ball team in that they play guard-heavy, but they have big guards and scored 48 points in the paint.

There were times when Cunningham was OSU’s center, and that forced WVU coach Bob Huggins to take Culver out because he couldn’t stay in front of a guard on the defensive end. There were other times when Culver would have success posting up Cunningham or Bernard Kouma and score.

It was a fun chess match for the neutral, but one that would probably had OSU fans pulling their hair out because of all of the offensive boards.

OSU was forced into it a little bit without Moncrieffe. After the game, Boytnon said Moncrieffe picked up an injury in practice before the Texas Tech game. He still played in that game, but didn’t play late because of some reaggravation. Boynton said he doesn’t think anything is wrong structurally, but they did do some preliminary tests juts to make sure.

That’s the nickname Twitter told me to give Cunningham and Isaac Likekele.

The duo did just about all it could Monday. They combined for 47 of OSU’s points and 16 of the Cowboys’ 39 rebounds.

The two were relentless in the first half, particularly Likekele. The junior went into the half with 16 points on 6-for-7 shooting. He didn’t settle for anything (and hasn’t all year), as he would just get his smaller defender on his hip and guide him to the rim.

Cunningham rebounded well and was 3-for-4 from the field in the first half before taking over in the scoring department again late.

Cunningham scored 10 of OSU’s first 14 points coming out of halftime, and he ended WVU’s 10-0 run with 2:06 to go, getting to the rim on back-to-back possessions.

The two benefitted from not having a true post player on the floor, as Boynton was able to stand five guards on the perimeter and have one or the other attack a clear lane.

Cunningham also showed he can be a lethal shooter, as he drilled a trio of 3s. Through 10 games, Cunningham’s 15 made 3s are the most among Cowboys.

4. Bryce Was Meant for OSU

It’s a shame Bryce Williams isn’t playing in front of a packed GIA because he has an innate ability to maestro the crowd with his energy.

He can tell when excitement is bubbling and knows when to clap his hands on defense and start waving on the crowd, and then he feeds off it and gets in a ball-handler’s grill. It’s awesome stuff.

GIA had as good a crowd as it could’ve had Monday, and Williams toyed with it in beautiful ways.

He finished with 11 points, five rebounds, three assists and a block.

His journey to OSU has been an interesting one. He went from junior college ball in Florida to Ole Miss and now to Stillwater. He is a senior, but I hope he uses the extra eligibility to stay in Stillwater one more year so he can feel a full building.

Bernard Kouma is a project who will be at his best in about two years, but he did some good things Monday.

With no Moncrieffe and with Boone in foul trouble, Kouma played nine minutes where he scored a basket and brought in a pair of rebounds. He also set some solid screens. Anyone hollering for Kouma to lock down Derek Culver needs a reality check, but in a few years, there is some promise there.

His basket was funny. Boynton called a play for him, but Keylan Boone chunked up a 3 instead of passing it to the wide-open Kouma under the basket.

After what I’m guessing was a stern talking to, Boynton called the play again, and it worked again.