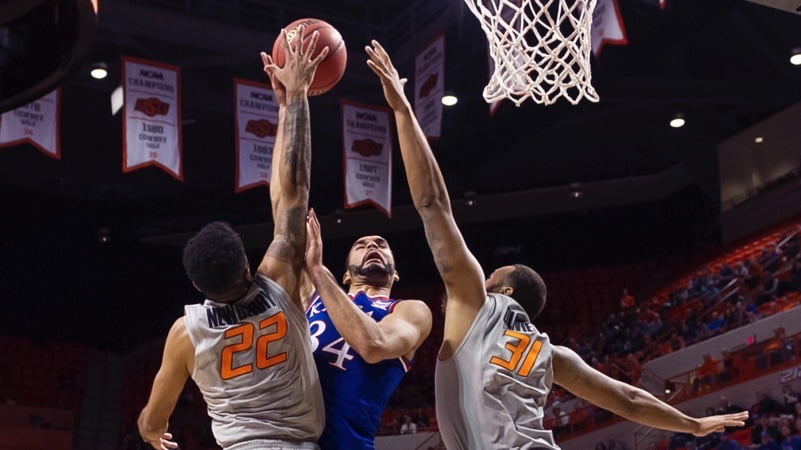 Travis Ford does it again. For the fifth time in Kansas’ last seven appearances in Gallagher-Iba Arena, Oklahoma State gets the win. This time it was on the back of its super freshman Jawun Evans. Evans threw a  sublime 22-6-8-2 stat line at Frank Mason Jr. and Co. and Jeff Newberry and Jeffrey Carroll kicked in 13 and 11 points respectively as the Cowboys manhandled the No. 3-ranked Jayhawks 86-67.

The most stunning thing about all of it is that it didn’t even feel like an upset (other than the court storming). OSU had the best player and looked like the better team the entire night. It led for the last 21:37. It led by double digits for the last 8:03!

It’s the kind of game that makes you not know how to feel about Travis Ford and about this team. If they’re good enough to do this then ……. ? We’ll talk about that later on, though. For tonight, the taste of Bill Self’s angry toupee sweat at the hands of another great point guard in a long line of them in Stillwater is plenty delightful.

Five thoughts on the biggest win of OSU’s season (by far).

He turns it over a lot (too much, really) but I’ll take all of it. Frank Mason Jr. looked like me in a couple of my grad school accounting exams all night. Zero clues. Evans whipped pass after pass like this all over the floor and has suddenly breathed some life into a semi-dead college basketball program.

He is the best (or second-best) point guard in the Big 12 right now. Heck, he’s probably the second-best player in the Big 12 right now. Like Marcus Smart before him, there’s not a box score big enough to truly explain what having the best dude on the court does for a team. The lanes are bigger, the threes more open and the layups more bountiful when No. 1 has it in his mitts. Bring me all of your Chris Paul comps!

Before the conference season started, I had the following conversation with my dad.

Dudes hit open threes. Clip hit them. Newberry hit them. Shine hit them. And Evans and Griffin created for them. It was impressive. It actually felt like OSU could have hit a lot more threes than they did given how many open looks they got. Oklahoma State still isn’t a good team, but with Evans growing into a star it’s at least a sort of scary one.

3. Everybody played well which had to happen for a W

I noted this earlier today, but the only way OSU could beat Kansas is for everybody to play far above the level they normally play at. You can check that off across the board. Anthony Allen had six boards and two blocks. Chris Olivier was 3/5 from the floor. Joe Burton scored. Tavarius Shine had eight. OSU looked like a legitimately deep basketball team on Tuesday night.

Bill Self: "I thought everybody that played for them actually played very well." #okstate

The problem with that is how difficult it is to sustain (but we’ll get into more of that later).

4. The O-State pressure worked or …

OSU put a lot of half and full court pressure on Kansas all night. That only resulted in nine turnovers for Kansas and five steals for OSU, but Kansas only shot 27 percent from three. OSU’s defense was stout … or Kansas just didn’t shoot it very well. It’s definitely one or the other!

What can’t be debated is that OSU flat out played harder that Kansas did in the second half. That was evident in the rebounding totals. Kansas came in averaging 45 boards a game in Big 12 play and could only net 31. Oklahoma State came in last in the Big 12 at 32 a game and pulled down 38. Evans tied Allen with the most of anyone on the floor which is crazy when you think about it.

The other thing I found odd was that KU didn’t pump it inside more when it started getting down. OSU had some guys in foul trouble and Kansas had a clear size advantage. It was like they just wanted to see if they could shoot with OSU and if not, oh well.

5. You storm that white maple all night, students

The (small-ish) GIA crowd was awesome all night. And OSU gave it plenty of reasons to be.