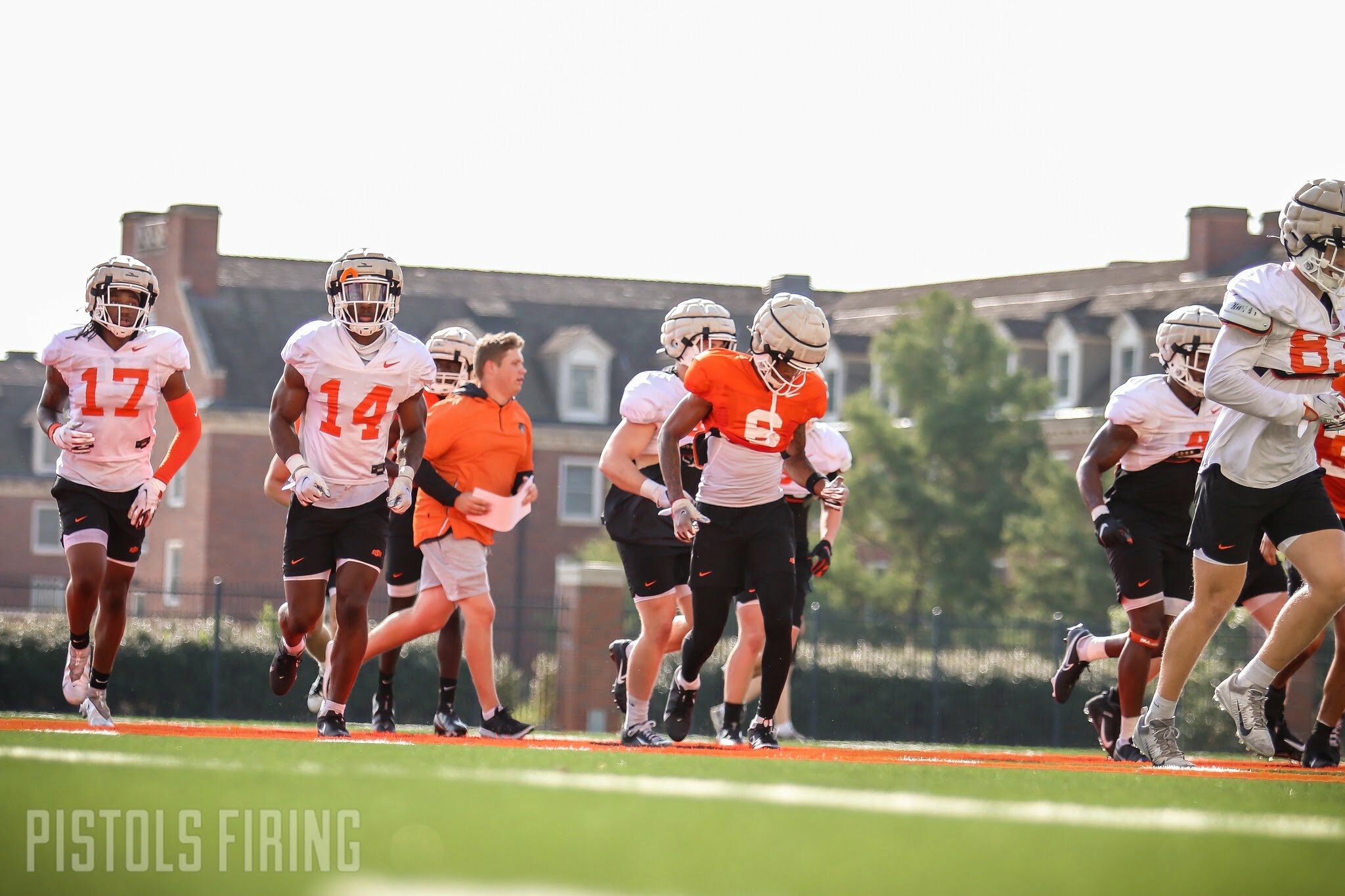 Oklahoma State released its first depth chart of the 2022 football season on Thursday with just one week to go until the Cowboys’ first game of the year. The two-deep featured some expected developments as well as some surprises, ranging from the return job on special teams to the running back hierarchy and much more.

Here are five thoughts on the first depth chart of the season.

If you’ve been following the drumbeat of training camp — and more specifically, the tea leaves Marshall has been leaving in his copy on the beat in Stillwater — then you know that Gunnar Gundy, Mike Gundy’s son, edging out Garret Rangel for the QB2 job behind Spencer Sanders really wasn’t much of a surprise. Now, technically, Gundy and Rangel are co-QB2 on the depth chart, but the elder Gundy (the one with the Arkansas Waterfall down his neck) said his son would be the first man up if something were to happen to Sanders. Gunnar has the experience within the system that typically gives players — especially at QB — a leg up in competitions at OSU. The hope here is that Rangel can spend a year learning and redshirting as he matures, familiarizes himself with the culture and the offense, and eventually grasps full control of what Tim Rattay and Co. are teaching.

A short depth chart at receiver last season thrust a ton of true freshmen into major roles, and boy oh boy does that now look like a blessing in disguise. The depth chart features two true sophomores as starters (John Paul Richardson and Jaden Bray) of the four starting receiver spots listed. Bryson Green, another sophomore, is listed as a backup behind Bray.

Both JPR and Bray flashed major upside in 2021 and have been the buzz of Stillwater for a lot of the last year since their arrivals. I’ve already picked Bray as my breakout candidate who could lead the team in receiving, and JPR has the juice to be a Kadarius Toney-like playmaker in OSU’s system.

Skimming the two-deep at defensive end and defensive line is certifiably comedic. It’s laughable how loaded that position group is. Greg Richmond and Joe Bob Clements (recently moved to linebackers coach) have assembled an Avengers-level of talent that should make the defensive line once again a force to be reckoned with in the Big 12 and beyond. Take, for example, one of the defensive end positions. It features Brock Martin and Collin Oliver as starters. The other defensive end position features Tyler Lacy and Trace Ford. They have so many game-changers the only problem — and it’s a good one! — is trying to sort out playing time. Each brings something unique and special to the table.

At defensive tackle it’s equally as good. Brendon Evers and Sione Asi are back as starters, and behind them, Samuela Tuihalamaka, Aden Kelley, Xavier Ross and Collin Clay sit as incredible, incredible rotation pieces. (Kelley was a high school All-American and a four-star recruit!)

Mike Gundy and OSU’s track record over the years tends to play in favor of more experienced players in position battles, so it should come as no surprise that third-year running back Dominic Richardson and second-year running back Jaden Nixon are listed 1-2 on the depth chart as ball-carriers (though freshman Ollie Gordon and redshirt sophomore Deondre Jackson are listed as “OR” alongside Nixon at No. 2). My read on this is that Richardson, as expected, will be the first man up in a committee, and the No. 2 job will be a rotation or even an outright in-season competition until they find someone who can be a steady force behind him. Gordon getting the co-nod at No. 2 is a good sign for his prospects, as is the mention of Texas A&M transfer Deondre Jackson in his first season with the program. Meanwhile, Nixon serves as a change-of-pace back with tremendous speed who reminds a bit of LD Brown. Talent, speed and pass-catching ability in this position group is really impressive.  I’m not sure there will be a clear No. 1 who gets 1,000 yards, but via a committee I think this group will be plenty productive.

Although true freshman swiss-army knife talent Braylin Presley has made some oohs and ahhs reverberate throughout camp with his change of direction and playmaking ability, Braylin’s brother, junior star Brennan Presley, is listed as starter at both kick return and punt return to open the season. Braylin is not listed anywhere on the two-deep. Brennan has been particularly effective on kick return the last two seasons, including scoring in that facet once last season. I’d expect his experience and playmaking pop will again create an advantage for OSU on special teams given his ability to break big plays.