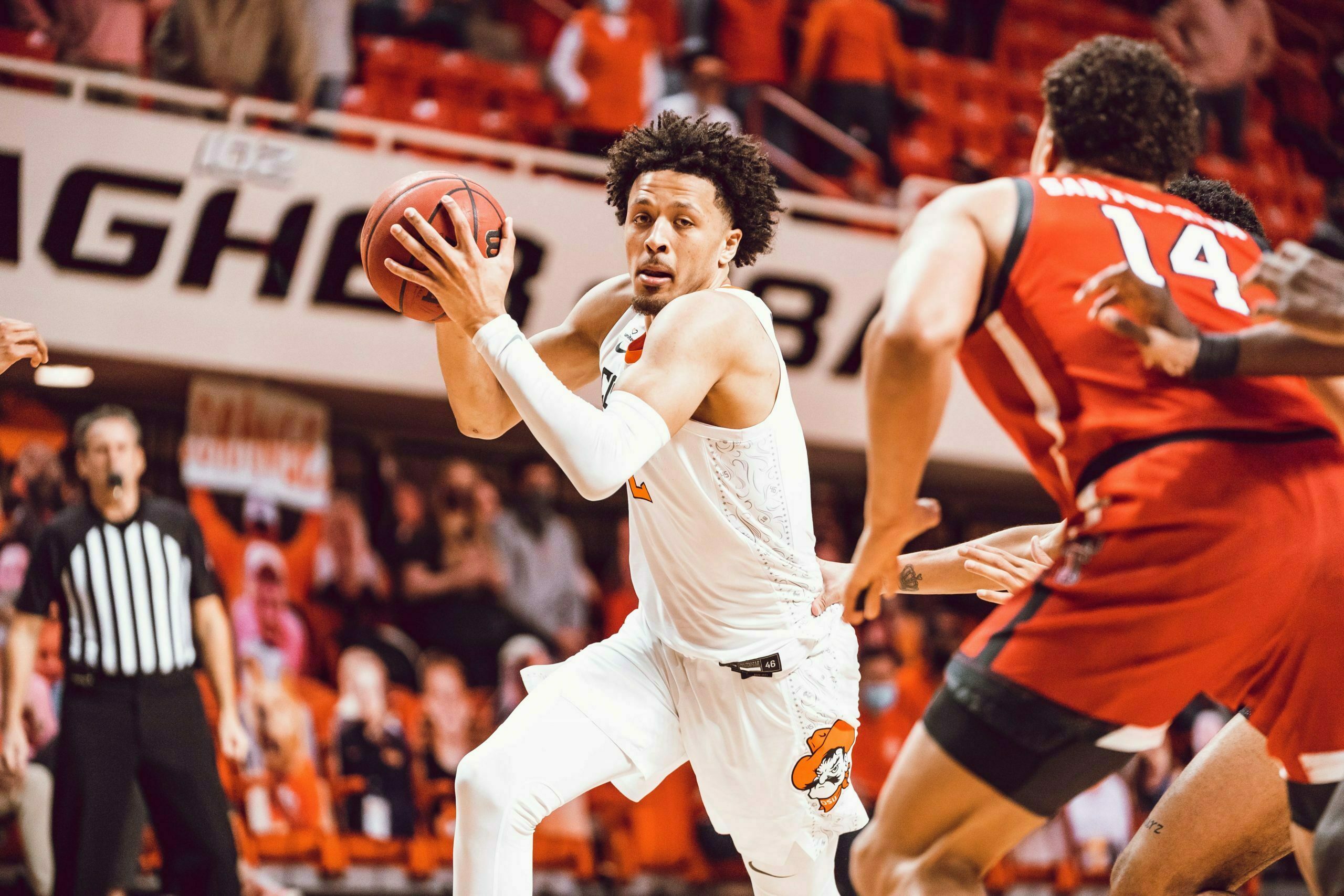 The Cowboys and Sooners are set to face off twice over the next few days. I had five thoughts on Saturday’s matchup and an exciting (and challenging) final week of basketball for the Pokes.

Because of COVID rescheduling, or the world we live in to use a Gundyism, both rounds of this year’s Bedlam series will take place within 54 hours of each other.

It’s the first time Bedlams will be held within three days since 1921 and the first consecutive games in the in-state series since 1943. It’s not really pertinent to this year’s result, but in case you’re curious, OSU went 0-2 against Oklahoma in 1921 and 1-1 in 1943.

2. A Murderer’s Row to Finish

Another result of that rescheduling, OSU is set to face four current Top-10 teams in a week’s time (two are No. 7 OU), with No. 2 Baylor and No. 10 West Virginia coming up next week. Only one of those games is in Stillwater.

The Cowboys are comfortably in the NCAA Tournament as of now (OSU is an 8 seed according to Joe Lunardi), but they can bolster their case with strong showings against the league’s best teams.

They would also like to keep from falling to No. 7 in the conference bracket to avoid a play-in game in the Big 12 Tournament. The win against Big 12 No. 7 Tech on Monday gave the No. 6 Pokes some breathing room, but the Red Raiders have a lighter schedule down the stretch and are capable of making a run.

He may not be a lottery pick, but OU’s Austin Reaves can fill it up.

Cade Cunningham has a stranglehold on the league’s scoring title, averaging 18.7 points per game, but Reaves (at No. 2) trails by about a point and a half at 17.3 per game.

While Cade will be a Bedlam newbie on Saturday, Reaves stuck in Pokes fans’ craw last season after the former Wichita State Shocker took his talents to Norman. While the schools split Bedlam last year, Reaves scored 21 and 24 points in a win and loss, respectively.

4. No. 1 Picks Perform Well in Bedlam

OK, the sample size is small (one), but future No. 1 picks have been successful in this series.

At this point, Cade is considered by most as the top pick in this year’s NBA Draft, and at least the safest pick by others. What he does over the next week — as well as in the NCAA Tournament — can help fortify that case.

But at this point Blake Griffin is the only No. 1 overall pick to have played at either school. He was infuriatingly good against OSU.

In three regular season Bedlams, Griffin’s Sooners went 3-0, and he averaged 24.7 points and 12.3 rebounds. But in his final bout with OSU (in the Big 12 Tournament), the Cowboys got the last laugh, edging out a 71-70 win over a Sooner team that would go on to make an Elite Eight. Griffin still managed to pour in 17 points and grab 19 boards.

The shadow Cade casts on OSU will ultimately be more a result of what he does in an NBA uniform than in the Cursive Cowboys, but his place in OSU fans’ hearts will be directly tied to how he performs in big games against big names. And this upcoming murderer’s row sets the stage for some all-timers.

Ranked opponents and rivalries mean more. And so do matchups between those teams’ top dogs.

So far, Cade has met two of the Big 12’s other Top 5 scorers, and he’s risen to the challenge. He’ll face the other two over this last week with Reaves twice and Baylor’s Jared Butler on Thursday. (Cade missed the first meeting with the Bears.) And WVU’s Miles McBride and Derek Culver are no slouches, combining for over 31 per game.

Cade scored 17 and 19 opposite TCU’s RJ Nembhard, though the Cowboys went 0-2. He went 2-0 against Texas Tech’s Mac Clung, scoring 13 in the first win (he made plays down the stretch before fouling out in OT) and leading the Cowboys with 20 on Monday.

Basketball may be a team game, but these are the star matchups that make great ESPN promos and that we put so much emphasis on, and when we’re lucky the alphas oblige.

Those are the games that we’ll recall for years to come. Let’s hope for a couple more good ones while we still get to see No. 2 don orange and black.