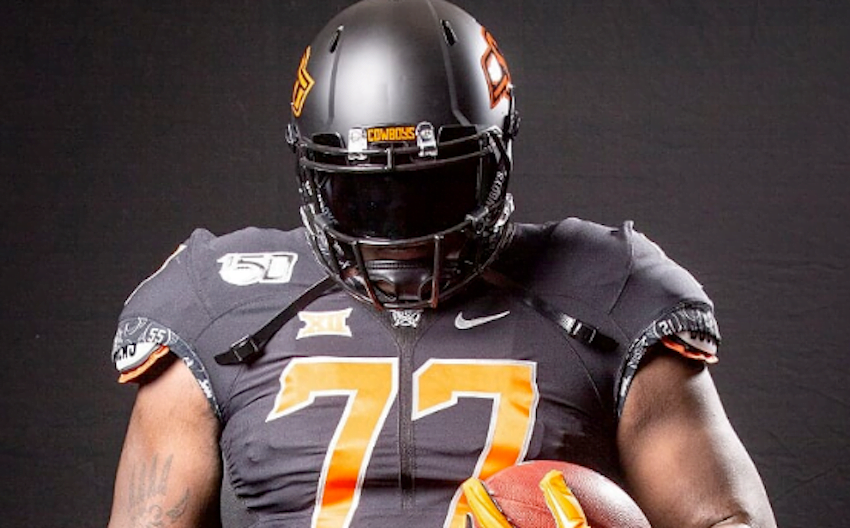 Four-star offensive line recruit Jaeden Roberts will make his college commitment on Wednesday, he announced this weekend. The Pokes have been after him for months on end in hopes of landing him as a base to build their 2021 recruiting class.

Here’s a preview of his decision ahead of hump day and an early guess at where he lands.

I will not bury the lede: this man is massive. A tank. At 6-5, 340 pounds, he is [channel Rob Lowe’s Parks and Rec tone] literally the largest player OSU has offered in this recruiting cycle. Here’s how 247Sports evaluates him:

Huge interior offensive line prospect with college-ready size. Flashes impressive point-of-attack strength. Thrives in the run game thanks to size and strength. Overwhelms smaller defenders at high school level. Shows encouraging block-finishing ability. Fairly quick when pulling or getting to the second level relative to size. Shows good straight-line athleticism on tape. Will need to improve overall agility and foot quickness. Physical ceiling likely limited because of size. Can improve hand placement, as well as pad level and leverage consistency. Gets too far out over his feet at times. Power 5-caliber interior offensive line prospect who can plow the row in the run game and possesses the size to give pass-rushers a large obstacle to navigate in pass pro. [247Sports]

I don’t get too carried away with the size of prospects because I think mobility — particularly for offensive lineman — is equally important. But Roberts moves well for his size and plays guard, where mobility isn’t as important as, say, offensive tackle or defensive end. He has the physical tools to be an early contributor wherever he lands.

The suitors are not in short supply for Jaeden Roberts. He has 26 offers to his name from the likes of LSU, Alabama, Auburn, Oklahoma State, BYU, Arizona State and others.

But in his announcement this weekend, it appears he’s down to a final six of LSU, Alabama, OSU, Arkansas, Auburn and Baylor. The top three are believed to be Alabama, Auburn and OSU, though he insists the entire top six just mentioned are still in the mix.

Throughout this process OSU has been considered a top-3 favorite of his. In fact ask me two months ago, I’d say OSU is the frontrunner. But Auburn’s late entrance to the mix has thrown a wrench into things for me, and now I’ve got less confidence in that. I’ll make my final prediction tomorrow but right now I think Auburn holds the edge.