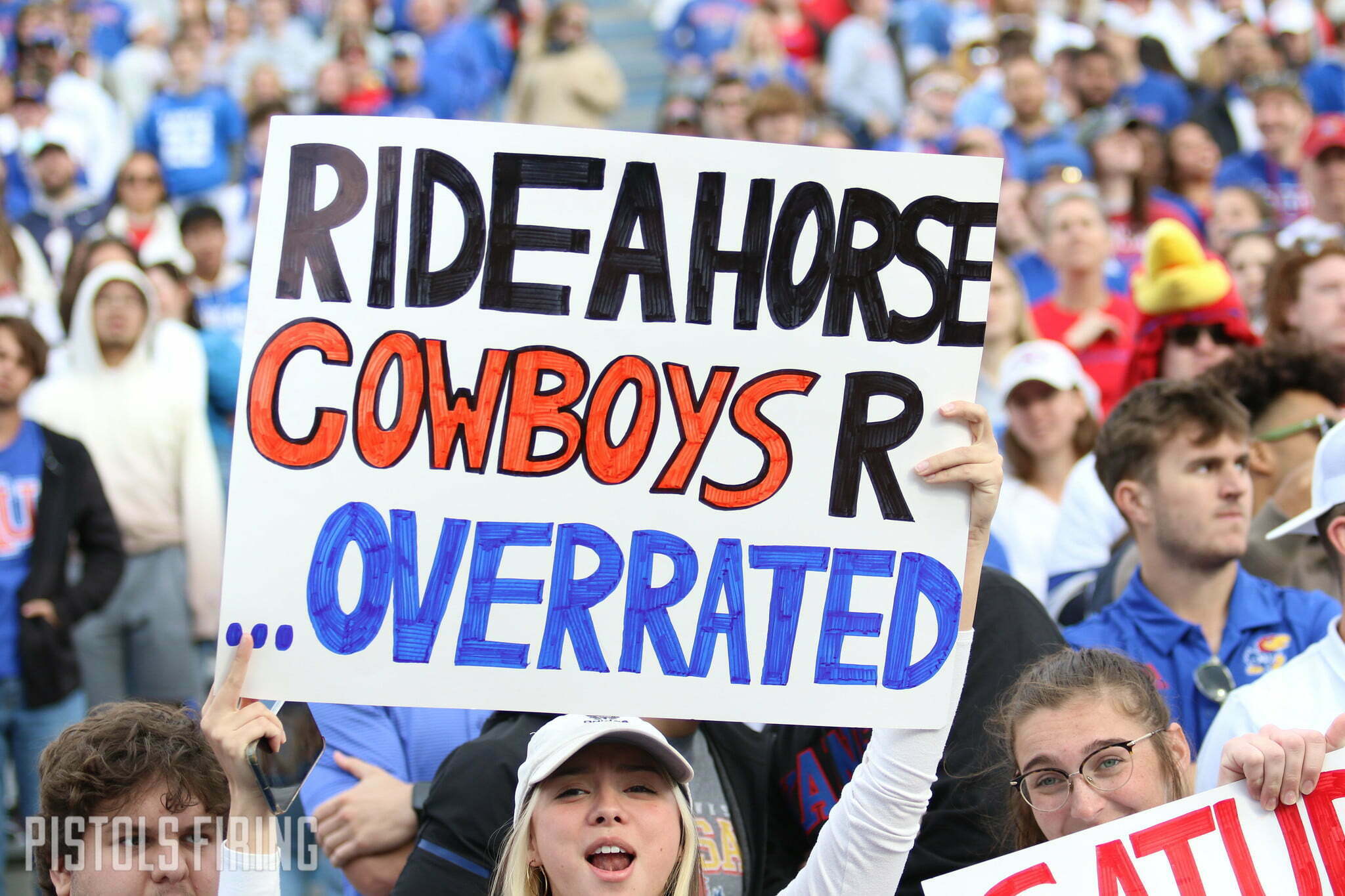 Look, I’m a nice teacher, I promise. I’m the teacher who bumps up your B+ to an A-. I’m the teacher who rolls in the cart and lets you watch an old “I Love Lucy” episode on Fridays. But I can’t with a clean soul hand out a nice report card this week after OSU got blown out in embarrassing fashion to Kansas. Can’t do it. Won’t do it.

Let’s get to the grades.

That loss hit me so square in the face and tilted me so hard, I don’t even have a grade for this one — only an adjective. This season is completely off the rails. I don’t get it. You beat Baylor on the road, you respond with a double overtime loss to TCU with a win over Texas, then .. this? Two consecutive blowout losses to Kansas State and Kansas, respectively? No real fight? There’s some injuries and attrition to be factored in, of course, but what we’ve seen from this team the last few weeks is just disappointing. They’ve gone from a borderline playoff contender, to out of the Big 12 title race and tracking for, like, the Pumpkin Spice Tempe Salsa Bowl. There’s been some late-season implosions that come to mind the last decade, but none more confounding than the one we’re witnessing.

OSU last season did such a good job putting its players in position to succeed. The defense seemed to always be a half-step ahead. The offense was good enough to get by. Special teams wasn’t a trainwreck (that’s a win based on special teams for most of the last decade). But OSU this season feels like the exact opposite. Defense can’t tackle and giving up chunk play after chunk play. Offense can’t move the ball on the ground and is too one-dimensional to be a threat. (Spencer being out hurts, but stay with me.) Now Tom Hutton the special teams GOAT is out for the season after injuring himself last week. That’s probably going to be impossible production to replace. It just feels like an accumulation of miscalculations from the coaching staff — not putting players in the right position, not having players prepared to do the basics like tackling and wrapping up or blocking — has completely gobsmacked this team in a way that has derailed the season.

It’s so bad, I’m actually giving this a G, which in my new gradebook is one letter score down from an F.

“I think there’s times as backers, we missed tackles. I know there’s times as D-linemen we missed some tackles,” said Gundy postgame Saturday trying to explain what went wrong. “So I think it’s just kind of everybody contributing. They just need to clear the mind, settle down, see what’s happening. You know, be able to run, tackle and wrap and get guys down.”

Rangel threw picks on his first two series as OSU’s starting QB, lost a fumble in the second quarter and finished with three interceptions and four total turnovers. Hard to win with that. But [looks around for safe space] I actually really liked what I saw. He made some big boy throws in that game. Played with a ton of poise. When he finally settled in, I think he showed some real promise. You don’t accidentally throw for 304 yards in a game if you don’t have some serious juice. He had two touchdowns and completed 27 of his 40 passing attempts, and as Marshall noted in his 10 Thoughts, it could have easily been 30 of 40 passing for three touchdowns, maybe better.

“Once he settled down, he made some plays,” said Gundy. “I mean, obviously turnovers are difficult, but he made a few plays.”

Here was a little more of what I thought of Rangel, which I wrote in Sunday’s edition of the Daily Bullets:

1. I . . . liked what I saw from Garret Rangel on Saturday. Look, I get it, I get it: three picks isn’t ideal. Understand! And fair point! But not all were his fault. He had two touchdowns, probably should have had a third if not for a drop. I mean, he threw for 304 yards in his first career start. Was really impressed with what I saw in terms of his overall talent. Maybe he’s not quite ready to be the No. 1, and that’s fine — he’s a freshman! — but I thought he was actually good enough for OSU to win over KU (if OSU didn’t completely implode in basically every other facet in the game).

This season seemingly set up for OSU beautifully to really improve its running game — OSU was working in eight or nine offensive linemen regularly and had a really nice rotation — but there’s just not enough push and consistent blocking to translate that (yet) into rushing production.

“Well, I don’t think there’s ever a time they don’t know who to block,” said Gundy. “I think there’s times that maybe they slipped off, fell off blocks, so on and so forth.”

Even with leading rusher Dominic Richardson returning from injury, OSU rushed for just 111 total yards as a team on 3.2 yards per carry, a stark contrast to KU’s 351 yards rushing and its 7.6 yards per carry.