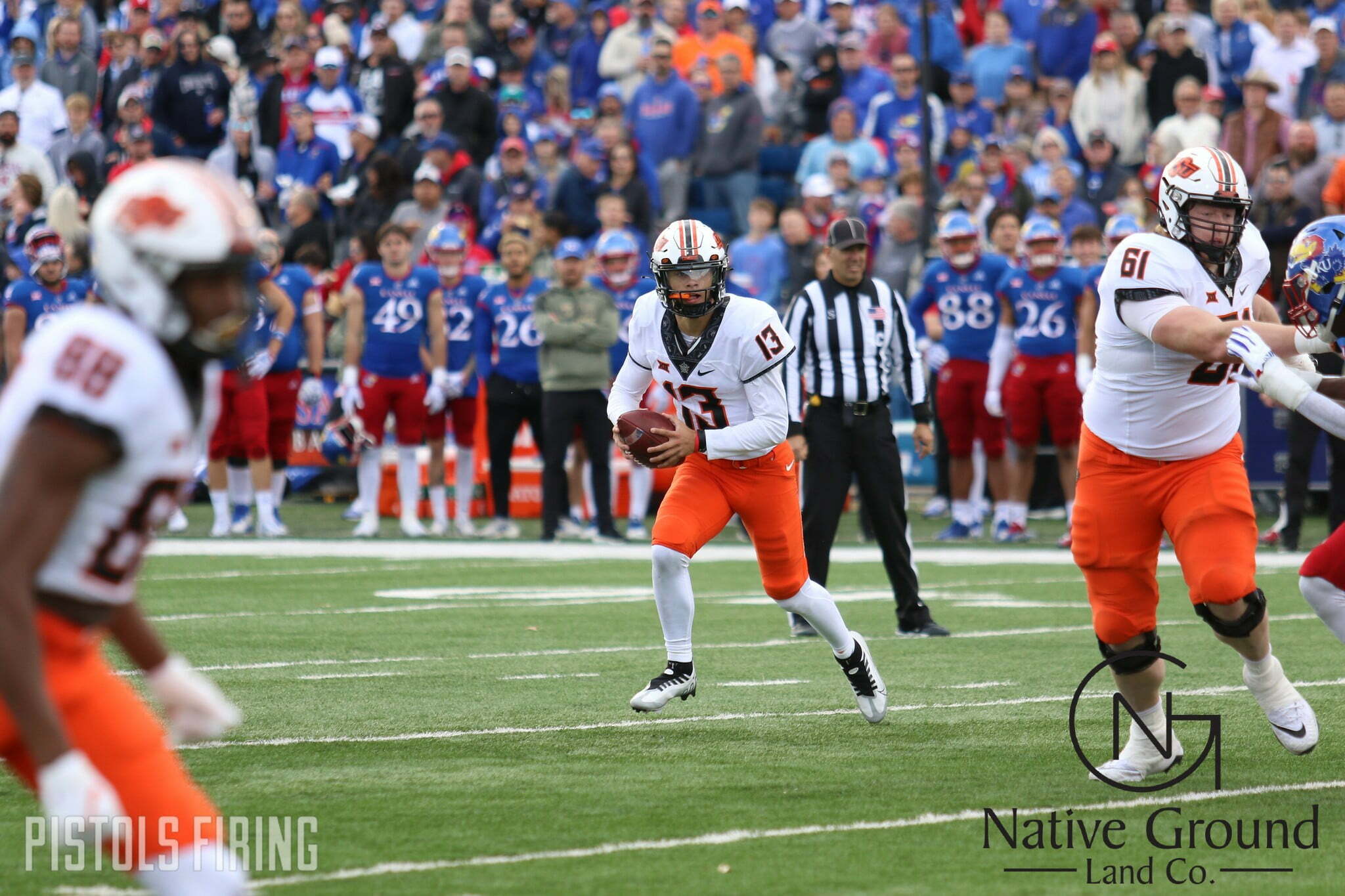 LAWRENCE, Kansas — For a second straight weekend, the Cowboys were flattened in the Sunflower State.

Oklahoma State lost to Kansas 37-16 on Saturday at David Booth Kansas Memorial Stadium. Here are 10 Thoughts from the game.

1. This Season Collapsed So Quickly

Even after a loss in Fort Worth, a Big 12 title appearance still seemed like a formality after OSU’s homecoming win against Texas. Now it feels like they might go the rest of 2022 winless.

The Cowboys have been outright uncompetitive the past two weekends. It’s gone from a 2021 runback to looking like 2014 before Mason Rudolph and Tyreek Hill saved the season.

It’s gone from New Year’s Six to OSU fans picking their favorite among the Guaranteed Rate Bowl, the Liberty Bowl or the Cheez-It Bowl.

In his first college start, Garret Rangel was 27-for-40 with 304 yards, two touchdowns and three interceptions.

He had four total turnovers on the day. That’s a lot, sure, but to pin this whole thing on a freshman playing his first extended playing time would be incredibly unfair. There were a lot of compounding factors that led to OSU getting thumped for the second straight weekend.

His game started woefully. The Pokes’ first two possessions resulted in two Rangel interceptions. But after that, he somewhat settled in.

In the second quarter, Rangel was 13-for-16 with 112 passing yards and a touchdown. He had a handful of nice throws throughout the game and even threw some balls across the middle, which is something I didn’t expect would happen given OSU usually throws it “sideways.”

Turning the ball over four times is no recipe for winning college football games. But on a day where OSU was starting a true freshman quarterback, the Cowboys always needed a defense or a running game to prop him up. Rangel got neither Saturday.

Kansas quarterback Jason Bean completed 78% of his passes while the Jayhawks ran for 7.6 yards a carry. It was ugly all over the place. There wasn’t much in terms of redeeming qualities.

Devin Neal had 224 yards on 32 carries, often times getting the ball in with no one around him as he was able to accelerate to full speed then run through would-be tacklers.

This defense was never going to be as good as the Cowboys’ 2021 D, but Derek Mason’s group has gotten exposed the past two weekends by teams that like to run the ball.

“We came into this game understanding that this team runs the football, and we got to tackle better,” Mason said. “Reality is we’ll get a chance to look at the tape and see where the breakdowns were, but just looking at it from the top, I start with myself. How can I be better? Then you look and you start to say, ‘What happened? Where did we leak?’ Came into this game and thought the gameplan was good. Felt like, even at halftime, what we got to do is do what we do better. Just way too many missed opportunities.”

4. The Gap in Offensive Lines

As good as Devin Neal was Saturday, he had acres of space when he got the ball.

A hot topic in the Mike Gundy era has always been recruiting, but even that doesn’t stand up here. Take a look at these starting O-line’s as high school prospects:

Not saying OSU needs to be rushing for 7.6 yards a carry, but if Kansas’ (KANSAS) collective of five players can provide that, OSU’s has to be able to get above 3.2.

5. Rangel ‘Ever So Slightly’ Beat Out Gunnar Gundy

It became fairly evident throughout this week that Spencer Sanders wasn’t going to play, but I’m not sure many thought his replacement as a starter would be anyone other than Gunnar Gundy.

Mike Gundy said they graded Rangel and Gunnar all week, and Rangel came out with a slight edge. After the first two picks, some on Twitter had seen enough and called for Gunnar to come in. But in a delicate spot with a kid playing for the first time, Gundy let Rangel work through it.

“I would hate to put a guy out for the first time early in his career and then him make a couple of mistakes and yank him,” Gundy said. “I don’t know that there’s any right or wrong. I think you give him a chance to fight through some stuff vs., that would’ve been with nine minutes to go in the first quarter, so that would’ve been a little difficult in my opinion.”

That’s a tough call to make. Who knows if Rangel ever regains the confidence if he is pulled two series into playing meaningful snaps. And like I said, he settled. It was just a little surprising that despite Gunnar being Sanders’ backup all season, we didn’t see him in a game where the Cowboys got blown out and the other quarterback turned the ball over four times.

Another spot where Rangel didn’t get a ton of help — the Cowboys dropped at least three passes in the first half.

The first came on the first series. Before Rangel forced a third-down pass that resulted in his first pick, he had Stephon Johnson open on a crossing route. Rangel’s ball was slightly behind Johnson, but it’s still a play that Johnson — only a freshman himself — would want back. And Kalon Gervin, the defender on the play, deserves some credit for breaking things up. But this is the second week in a row Johnson dropped a could-be touchdown pass on the first drive of a game.

In the second quarter, Bryson Green — OSU’s most productive receiver on the day — dropped a pass at the goal-line. Lucky for Green, Johnson picked him up, catching a touchdown a few plays later. Green regained and finished with nine catches for 105 yards.

But on OSU’s next series, Johnson dropped a ball on first down, leading to OSU’s only three-and-out of the day.

With as on fire as everything seems, it’s easy to forget that, without Braydon Johnson, the Cowboys are still young at wide receiver. Green is only a sophomore, and Stephon Johnson is a freshman. But again, in a world where you’re starting a freshman QB and the defense can’t stop the run and your team can’t run, those drops become crucial.

How did OSU lose to Kansas in football? Well, there isn’t one reason.

OSU didn’t (and hasn’t) run the ball well. OSU didn’t stop the run. OSU turned the ball over too much. And OSU dropped a few passes.

It’s terrifying that much going wrong, but it gives some semblance of hope in knowing that if OSU fixes two of those four things, this thing can turn around.

The Pokes don’t need to be a team that can run, can stop the run, can keep control of the ball and can catch every pass (as nice as it’d be) — running well and stopping the run might be good enough.

Kansas had 14 points off turnovers. Fixing that alone makes this game 23-14. Then think if one of those erased turnovers turned into OSU points. Then things are starting to cook.

The Cowboys don’t need to be a perfect team; they just can’t be that bad at everything. Does that make sense?

This is the first time since 1995 Oklahoma State has lost to both Kansas schools in a season. That was the first year of the Bob Simmons era, where OSU went 4-8.

The Kansas schools outscored OSU 85-16 this season. What timeline is this?

9. The Team that Made the Jayhawks Bowl Eligible

For the first time since 2008, the Jayhawks will play in a bowl game. Students rushed the field and tore down the goal post to celebrate. Kansas’ six wins came against Tennessee Tech, West Virginia, Houston, Duke, Iowa State … and now Oklahoma State.

10. Will OSU Win Again This Season?

With three games to go, OSU can finish the regular season 9-3, 6-6 or somewhere in between, and I have no idea where that will be.

Step one in that journey starts with Iowa State after the Cyclones picked up their first Big 12 win Saturday. Iowa State is 4-5, needing to win two of Oklahoma State, Texas Tech and TCU to get bowl eligible. Iowa State entered this week last in the league in rush offense, so at least there will be some sort of reprieve in that area.

Then comes OU, a team that lost to Baylor on Saturday. After starting like OSU has played the past few weeks, the Sooners have played better as of late. They’re still not your grandpa’s Sooners, or even your older brother’s, but it’d be hard to favorite the Cowboy team that played Saturday over OU in Norman.

Then comes West Virginia, a hot and cold team. The Mountaineers can go from beating Baylor to to getting blown out by Texas Tech. JT Daniels is certainly good enough to beat you if given the opportunity.

If the Cowboys can lose to Kansas by double digits, they can lose to any of those three teams. But somewhere in there has to be that OSU team that beat Texas or the one that beat Baylor or even the one that held on against Central Michigan.

In the modern era of college football (filled with instant gratification and rash decisions), finishing this year strong could be big for the future of the program, even if finishing strong doesn’t mean winning a Big 12 Championship.