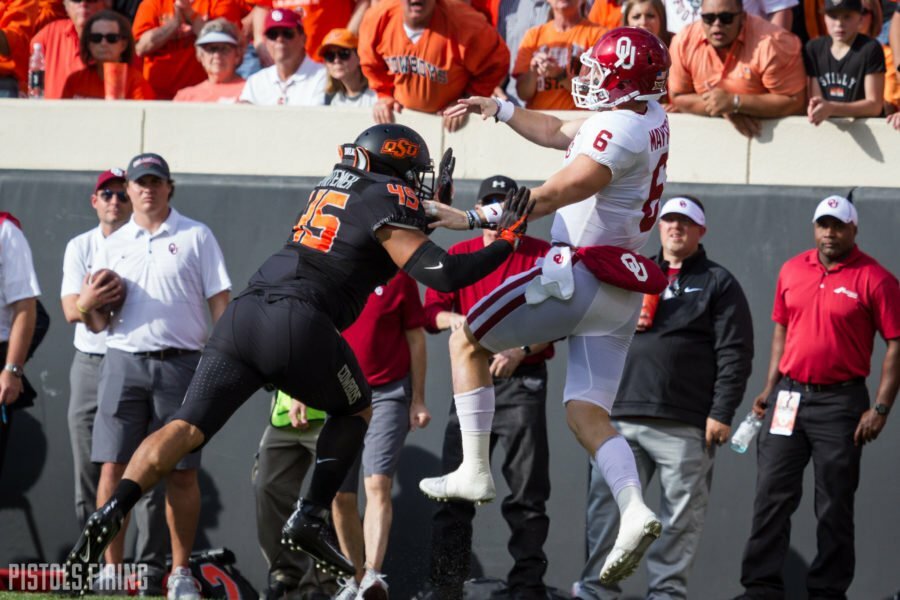 On Saturday night in Stillwater when Chad Whitener intercepted Baker Mayfield on the goal line, an air of history settled over the stadium. We all sort of understood at that moment that no matter the outcome of the next drive, legacies would be shaped, Heismans would be dished out and history would be made. The 2017 Big 12 (and possibly much more both this year and beyond) rested on that drive.

A trajectory-changing win for Mike Gundy and Oklahoma State. An early career-defining moment for Lincoln Riley. Mayfield’s Heisman. Rudolph’s stake in the ground as the best to ever do it in Stillwater.

We often retroactively apply hyperbole to moments that weren’t in actuality as big as we like to make them. This one was, though. It was everything you want from a college football game between two of the 10-15 best programs in the country over the last decade.

And Oklahoma State couldn’t get it done.

“Would we change a few things? Sure, we would,” said Gundy on Monday. “You would always change a few things after we lose. Would you call a couple of different plays? Probably. Would you have changed things you did defensively? Probably. But, the overall concept that we — and by that I mean Mr. Pickens, Coach Holder and myself, as well as the organization as a whole — have been striving for is what we got Saturday.”

This is a point a lot of people are missing, I think. The number of FBS teams that can reasonably ask for more than what OSU did on Saturday is zero. I’m not talking about 2013. I’m not talking about 2015 or 2016. I’m talking about 2017. Getting your team to the final drive on which it had a chance to beat a top five team with the Heisman winner on the other side? That’s the entire goal of everything every team in the country does. Maybe Alabama’s goal is to beat OU by 14. Maybe. But that’s the only other team that might have a different expectation.

And it didn’t go OSU’s way, but you run that drive back 100 times, and Oklahoma State goes up in 65 or 70 of them. As a program, that’s a big deal. This is why Boone Pickens called Saturday one of the greatest games he’s ever seen.

“We’re going to continue to funnel money into this program and continue to recruit good kids and quality people,” said Gundy. “We want to keep quality coaches here. I think that could’ve been, arguably, the most important game in the history of Oklahoma State football, in my opinion. I couldn’t be more proud of everybody.”

“We’ve had some great game day environments, but not like that,” said Gundy. “Not in a prize fight where two heavyweights are just going blow-for-blow one after another. If it was Rocky 8, it was Rocky 8. It just never stopped, and we had every chance to win.

“We were down 10, down 10,  down 10, and I was sitting there thinking, ‘You’ve got to be s******* me,’ as we were down 10 again. It never stopped. The crowd was in it and never gave up. It was a big run, then a big pass and then the defense made a big play. Defense came out in the third quarter and got two sacks one right after the other to push them out of field-goal range.

“As I said, when Mr. Pickens tweets that out about how he feels that was, that’s important to us and to me. So, when I look back on it, that could be one of the very most important games in the history of this school.”

Only history will tell us, but, irony of ironies, Saturday’s loss against OU could be the jumping off point for what everybody wants from Gundy right now: To somehow transform a top 15 or top 20 program into a top 10 program. I think this is what he’s referencing when he calls it important. A showcase atmosphere for where OSU has come and a nod to boosters and Important People With Money that there is much work to be done.

Is this a diversion by him so we won’t talk about his 2-11 record in Bedlam? Maybe. And I think there’s some truth to the people who say, “I don’t care about this, Mike. I just want to win Bedlam.”

But it also felt like a statement. Gundy came out swinging in his Monday presser — I watch them all, and I’ve never seen him go on unprompted for that long. It was as if to say “2015 is not who we are. 2016 is not who we are. This game is who we are. When both teams are at their best, we’re just as good as they are.”

Nobody wanted to give money in 2015 or 2016 unlike this year when two Important People With Money called him on Sunday. Nobody wanted to push the program in those years. There was an emptiness to those losses that didn’t exist this year. On Saturday, though, Oklahoma State showed that it can roll with title contenders.

“How long has Michigan or Notre Dame had tradition? How long has OU or Texas? So, we’re working at it,” said Gundy. “We’re building it, and I won’t be the one to finish it. I’m not going to coach long enough to finish building the tradition that it takes to be a year-in, year-out top-10 team. I feel like we’re a top-20 team now. I’m comfortable with that.

“Some years, you may not end up that way, but we can go on a neutral site right now and play anybody and it’ll probably be a hell of a game. How good are Alabama and Georgia? I don’t know because I haven’t watched them very close, but probably pretty good. We can get on a site with most people and probably have a heck of a football game, and that’s what I’m talking about.”

The question for me is whether 2017 will be just another chapter in a full book of sadness and angst or whether we will look back on that loss in this year and say, “That’s when Oklahoma State football stopped being good and became great.”