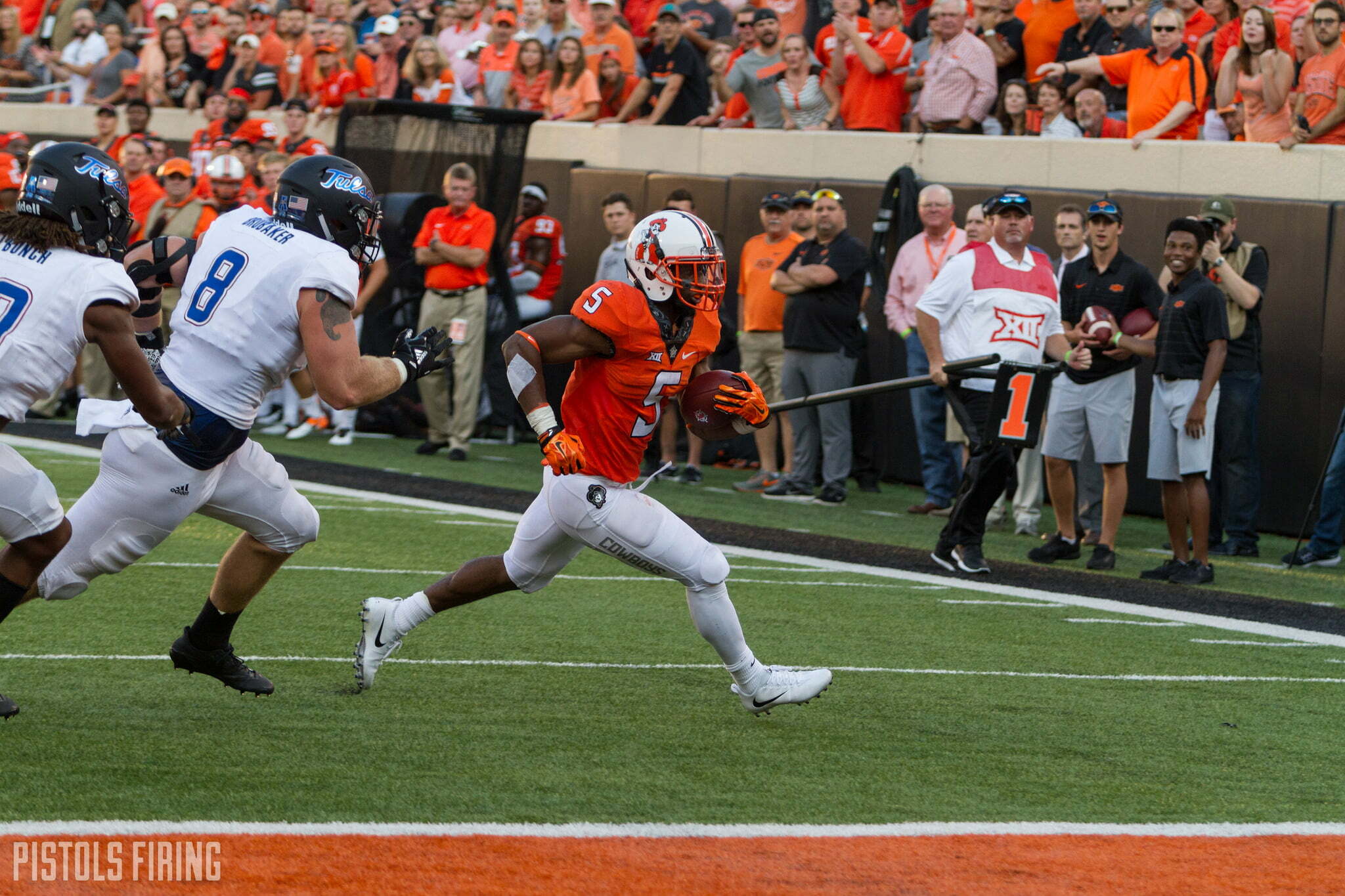 Justice Hill is finished truck-sticking Sooners and will jump-cut college DBs no more. He announced on Monday that his time playing for Oklahoma State is done.

So as we look back on an historic career, let’s remember it with some of the most jaw-dropping and awe-inspiring plays that I’ve ever seen on a football field. Fortunately, we got to see them made by someone in orange.

Let’s look at some of the best plays of Justice Hill’s career categorized by some of his most impressive attributes.

Hill’s ability to break loose on a big run makes him a home run threat almost every time he touches the ball. Just this year, we saw use his change of direction to make this Boise State defender guess, then he was off. Another inch of real estate and Justice would have found pay dirt.

Here Hill busted through the first level of Colorado’s defense while Mike Gundy was trying to run out the clock and complete the Alamo Bowl rout. But the freshman was too young to care and too fast for anyone else to say any different as he capped his historic first year at Oklahoma State with this score.

During Homecoming 2017, Justice hit the sideline to blow this game wide open. Bonus points to Marcell Ateman for the strong downfield blocking.

And in the season opener this year, he almost took it to the house from 95 yards away.

Something Out of Nothing

Justice has made lemonade out of lemons several times during his collegiate career. His ability to take what should be a negative or no-gain play and turn it into the stuff of highlight reels is something I think I’ll always remember about Justice’s time at OSU.

In a similar situation, a lot of RBs would have taken a loss or got a short gain. But Hill thinks (and runs) quick enough to reverse direction and make the big play.

As Virginia Tech threatened to complete the comeback during last year’s Camping World Bowl, Mike Gundy seemed more interested in running clock up 6 with three-plus minutes to go than getting the first down. But Justice made any hand-wringing about play calls a moot point. Here he casually picks up 25 yards to put the game away.

This was one of many memorable plays during Hill’s 228-yard, two-score career game against the Sooners.

Lost in the Crowd

These are some of the most exciting types of runs we’ve seen from Justice during his time in orange, and they remind me of some Barry Sanders runs I’ve stayed up late watching on YouTube.

Justice hits the scrum, gets pulled, pushed and surrounded and your eyes look away from the screen. Then, two seconds later, you glance up and he is 10 yards downfield like Harry Houdini slipping out of straitjacket and out the trap door.

Here’s one such run from OSU’s trip to Ames from 2017. He racked up 134 yards and a career-high three rushing TDs in the 49-42 win over the Cyclones. And it started with a nice truck-stick, as well.

Earlier that year, he pulled off a similar stunt, baffling a hoard of Red Raider defenders in Lubbock. He would finish that game with 164 yards on 30 carries. His lone TD came in the air.

It would not be an accurate representation of Justice’s greatness if we didn’t include a couple of his nasty side-steps. His first step can pull the turf right out from under a defender, and then his second can break ankles like AI in his prime.

Against Tulsa during last year’s 2017 season opener, Justice dealt a harsh stiff arm to one of the Golden Hurricane and then slipped another with a sick jump-cut.

He did the same thing against Pittsburgh shortly later.

This list is by no means exhaustive (I could have done a post on just his top 10 plays from Bedlam 2017), but I think it offers a pretty good look at what makes Justice such a special player.