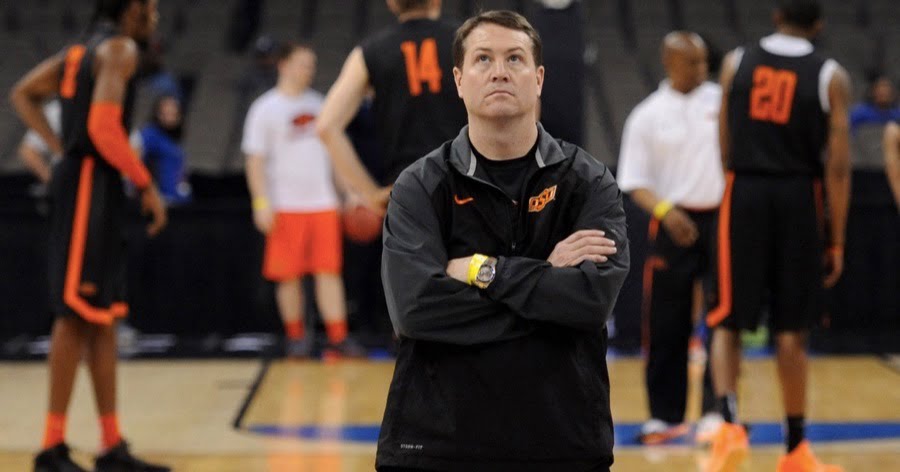 Is Travis Ford going to get canned or not?

I’ve been trying to come up with various angles to this thing for the last few days in hopes that a post or two or maybe even a column might arise.

I finally realized that my best bet is just to do a brain dump on you with a bunch of thoughts I’ve had over the past week about Travis Ford and the future of Oklahoma State hoops.

In no particular order, here they are.

• Over the past few years I feel like I’ve obtained a better understanding that no matter how much money you make, you’re still a human. That’s easy to forget when it comes to sports and impersonal figures we will never meet like college coaches.

That’s why this sucks for Ford. It’s not his fault he signed a $20 million contract. Anyone would have. Literally anyone reading this would have.

Any professional animosity we have for him should be the overflow of a passion we share for the entity he hasn’t handled well and not for the man himself.

I’ve struggled to grasp that in the past — it’s easy to when you have to make a bunch of jokes about OSU sports every day that people will read — but I find it important to remember in times like these.

When will he hear from him and is a longer wait a better or worse sign for Ford? I say worse. If you’re going to keep somebody, you announce it right away. Right after that Helsley article is written. This morning, probably.

If you’re going to fire him, you might need time to piece a plan together.

• What are the odds OSU’s next coach (whoever it is and whenever it is) ever signs a 10-year deal? I’m convinced Holder wouldn’t sign Bill Self to a 10-year deal at this point.

• In thinking about Ford and Gundy so much over the past five years, I’ve realized just how little I would want my professional performance to be played out in a public forum. Or criticized as widely as theirs is criticized.

It’s part of the job, I understand that, but no amount of money can protect you from how brutal it is to watch play out when things are going badly.

That’s going to be his legacy if he gets canned soon. So close to connecting with OSU fans and being great at his job but not quite good enough. The JW Walsh of college basketball coaches (DON’T DRAG HIM INTO THIS!).

• If Sean and Ford both get fired on April 1…

Had to look it up: Yes. RT @SteveMc123: @TheMikeHarris wasn't Sean fired on April fools day?

• How long ago does this feel like? Over or under three years?

• ESPN is saying it’s 50-50 that Ford will return. How awkward is that first team meeting in the fall if he does come back. “I almost got fired last summer, guys, but I didn’t! Phil, take 39 shots tonight if you want. I don’t even care anymore.”

• Speaking of Phil, I get why he would RT this. What I don’t get is what exactly qualifies as a “deep run” given that, you know, the two deepest runs of Sutton’s career were exactly the same length.

• I want video of Butch Pierre carrying the duffle bag of $100s to Ford’s house and hoisting it over his head onto Ford’s countertops.

• This Rick Barnes contract is great news for Oklahoma State.

Remember, they only owe Ford the balance of what he doesn’t make elsewhere. If he goes and gets himself a contract with somebody like Tennessee for 2.25 a year, suddenly OSU has washed its hands of everything.

Rick Barnes' contract at Tennessee is 6 years. Base salary of $2.25 million per year.

Will that happen? Probably not. But plenty of schools would kill to go to three straight NCAA Tournaments like Oklahoma State has.

• Why hasn’t anyone created a Markel vs. Desmond slam dunk contest at GIA to raise money for this thing? You could charge $100 a head and get a start on the buyout.

• Berry Tramel is right that paying someone $10 million to not coach is lunacy. His premise, though, is that college hoops (and football) is something other than big business. It isn’t. It hasn’t been for a long time.

If you believe your CEO is leading your money-making organization down a path it will take years to recover from, there’s no buyout too high.

• At what point in your life would you think to yourself “I have a lot of money. I’m going to give millions of it to a university to solve its problem of having bad leader for its 20-year-old basketball players because I want the pleasure 4-5 more wins a season brings me.”

I mean, I love OSU hoops, but I have my boundaries.

• I’ve seen Shaka Smart, Brad Stevens and Jay Wright thrown around in regards to Texas. Might as well call Popovich, Steve Kerr and Doc Rivers while you’re at it!

• This all feels a little like a “be careful what you wish for” thing to me. Am I pleased with Oklahoma State hoops these days? Nope. Could it be much worse? Let’s check in on our Texas Tech brethren….

Travis Ford isn’t an awful basketball coach like everyone wants you to believe. He’s a mediocre one at a school that should absolutely be better than mediocre.

He can’t get out of neutral in the regular season which could pretty easily be excused if he didn’t have a five-game losing streak in March. Two Sweet 16s and there’s chatter here and there but nothing major like we have on our hands right now.

His trajectory is not one to pop fireworks and champagne over, certainly.

But if you buy him out and commit $3-5 million over the next four years to the head coaching position of a sport that’s bleeding money, then I hope the plan you have is a good one.