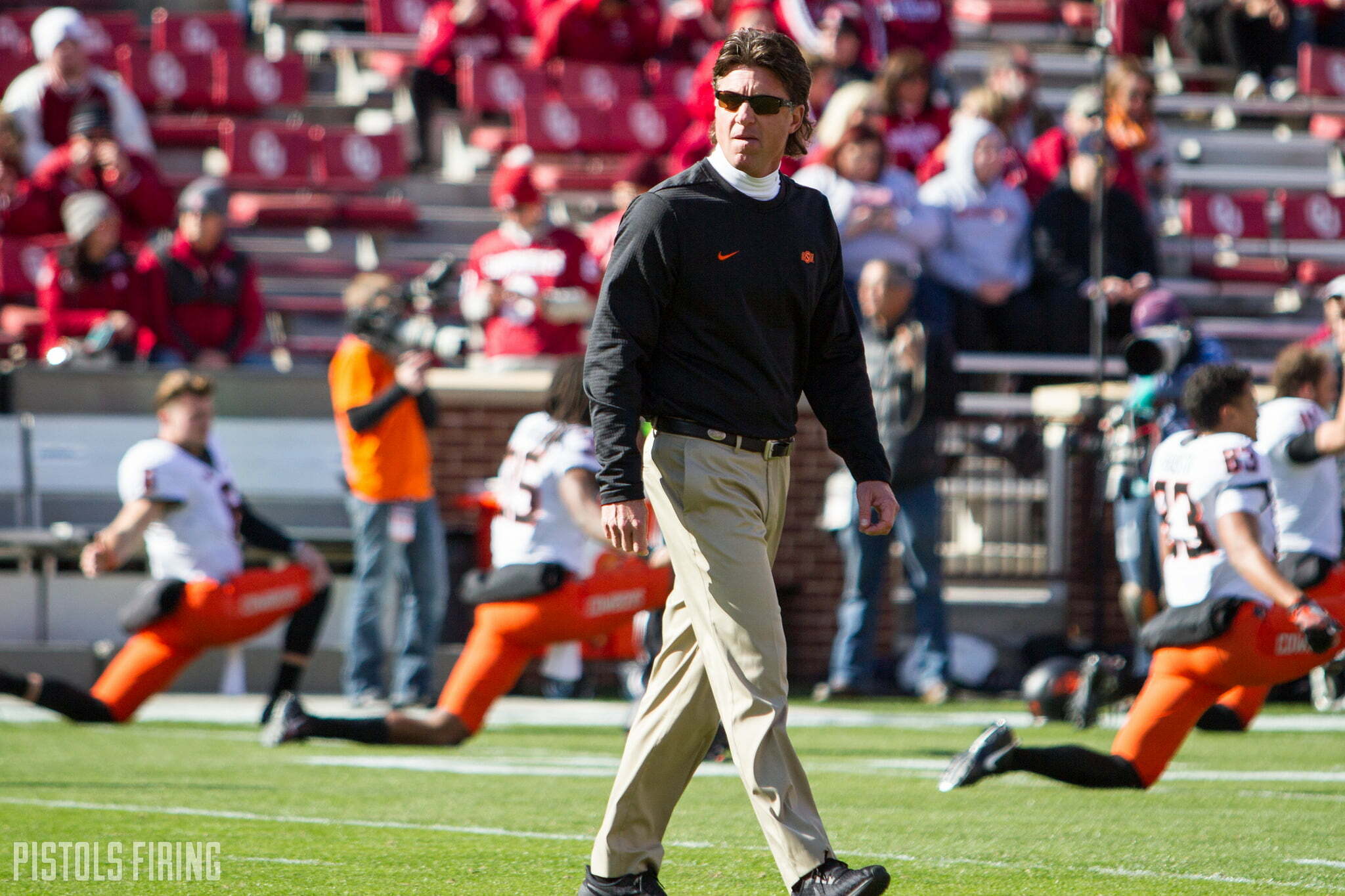 Oklahoma State’s 2019 recruiting class ranks 45th in the country and seventh in the Big 12. With 19 commitments on board, there are a maximum of six spots yet to be filled — the NCAA has a strict 25-man limit on classes to prevent over-recruiting (thanks, Bama) — but perhaps fewer holes to plug.

Nonetheless there are a few remaining targets on the board, which suggests, theoretically, that OSU has a chance to make a run up the rankings ahead of signing day. Here are the scenarios that could play out and where it would leave OSU.

A caveat: Recruiting rankings are ever-changing! Just because OSU lands a commitment or two doesn’t mean the rest of the recruiting world stands still. For every recruit OSU lands in the final days, teams ahead of OSU are likely responding by grabbing commitments of their own, too. So keep that in mind and don’t be surprised if OSU’s last-minute recruiting flurry doesn’t provide a steady climb up the rankings as you may expect.

Scenario 1: Dezmon Jackson gets a ranking

Oklahoma State’s class was ranked 45th in the country and seventh in the Big 12 before junior college tailback Dezmon Jackson committed over the weekend. But even factoring him into the 247Sports class calculator, he doesn’t yet move the needle — only because he has yet to receive a ranking of any sort.

If Jackson gets your run-of-the mill three-star ranking, it should give OSU a two- to three-spot boost in the national rankings overall.

If you’re an OSU fan, here’s the wish list item you’re definitely putting at the top this Christmas season. Glass is a stud. If the four-star running back were to commit, he’d instantly become OSU’s highest-ranked recruit in the class and shimmy OSU up the rankings even further.

As I’ve noted, OSU currently sits at 45th nationally with a 179.24 team score. Factoring in a potential Glass pledge, OSU’s team score would jump to 188.11 overall. That would move OSU up to 38th nationally and ahead of Baylor (by one spot).

A three-star pass-catcher who 247Sports experts currently peg as a Baylor lean, Langston Anderson would fill a big need at WR in this class. It wouldn’t be an upset if he went black and orange over green and … whatever colors Baylor wears. Gray?

Anyway, his commitment would be a multi-spot jump for OSU to around 40.

It definitely feels like it will be either OU or OSU for NEO A&M standout edge rusher LaRon Stokes. Gundy visited him this past week via helicopter, but Lincoln Riley responded Monday by paying him a visit with a clean haircut. Oh, the drama!

Stokes isn’t ranked right now but late interest and offers from OU, OSU, Virginia Tech and Oregon, among others, suggest a minimum of three stars is headed his direction.

I definitely don’t think all of this will happen, to be clear. I’ve already made enough already boneheaded predictions about how this class will finish. But if all of the good news happens as I mentioned above — Jackson getting a ranking, Glass, Anderson and Stokes committing — then OSU can rocket right into the realm of recruiting relevance.

According to 247Sports’ recruiting class calculator (and some guessing on my part based off how I think Stokes and Jackson would be evaluated), OSU could finish right around the 200 mark in terms of total team score.

If nothing changed with any teams ahead of them, that would put OSU right at 32nd nationally. But for a little added context: A 200 team score in the 2018 cycle would have finished 42nd nationally (Cal had a 197.41 and finished 42nd last year).

I suspect Jackson will get reevaluated and maybe Glass commits, but even with those potential developments I think it’s more likely than not that OSU hovers right around the 45 mark in the national recruiting rankings.