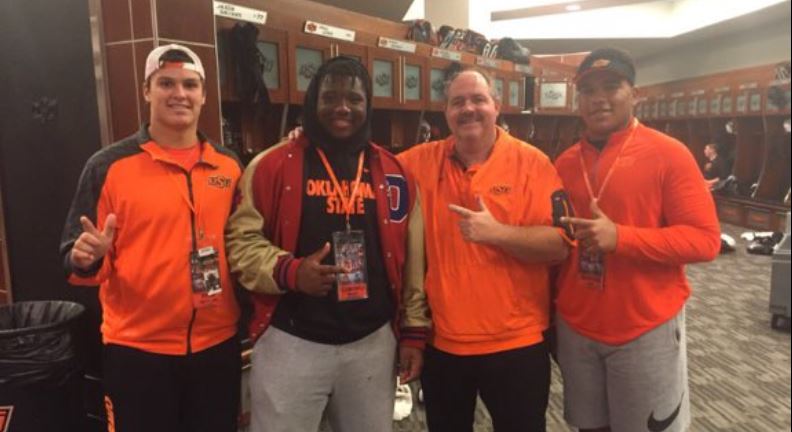 Homecoming is as good a time as any to host recruits on visits; the vibe and buzz around town generally create a great atmosphere to show off the facilities and make a good impression with prospects about their potential future homes. Several important recruits made the trek to Stilwlater this weekend, and here are some key visitors and a look at where they stand with the Pokes.

Moore is the piece of the puzzle the Cowboys would like to land to finish off the 2016 class for the offensive line. A 6-foot-6, offensive lineman who is reportedly up to 350 pounds, Moore could be an instant contributor as a freshman with his elite size and knowledge of the game. It seems apparent he’s likely staying in state with OU or OSU, but Alabama and Florida State are still expressing high interest in the John Marshall standout. After the visit, he tweeted out the below picture showing support for the town after the homecoming tragedy.

Reed is a 2017 offensive lineman who already has offers from Oklahoma State, Texas Tech, Houston and others. He’s a Texas kid, so if Texas, A&M, or TCU jump into the mix it may hurt the Cowboys chances. But the Oklahoma State staff has been in on him early, and that has helped their chances in the past with other top prospects.

McCollum has a chance to be an early contributor for the Cowboys, as he’s enjoyed a big-time senior season for Klein Oak this year. His physical dominance at the high school level should be taken with a grain of salt, but he seems to be primed to make the jump to Div. I next year if he can put on some weight to his 6-foot-6 frame.

Thompson became the second 2018 Southmoore prospect to pick up an offer from the Cowboys this weekend, joining fellow teammate Brey Walker. Thompson is already breaking out as a top talent in Oklahoma, and he’s only a sophomore. He won’t fly under the radar for long, especially given his family’s long football history with the Sooners.

After a visit to Stillwater this weekend, I have received an offer from OSU??? pic.twitter.com/pqQ973qxLn

Starkel again made an unofficial visit to Stillwater this weekend with his teammate and slot receiver Justus Lee. Starkel has been committed for quite some time, but his appearance is important because it shows he’s still in good standing with the Cowboys and the coaching staff – even after receiving an offer from Texas A&M. His commitment status appears to be solid, and that’s one less thing Mike Gundy will have to worry about heading into February for national signing day.

Can't wait to get to Stillwater today with @JustusmLee