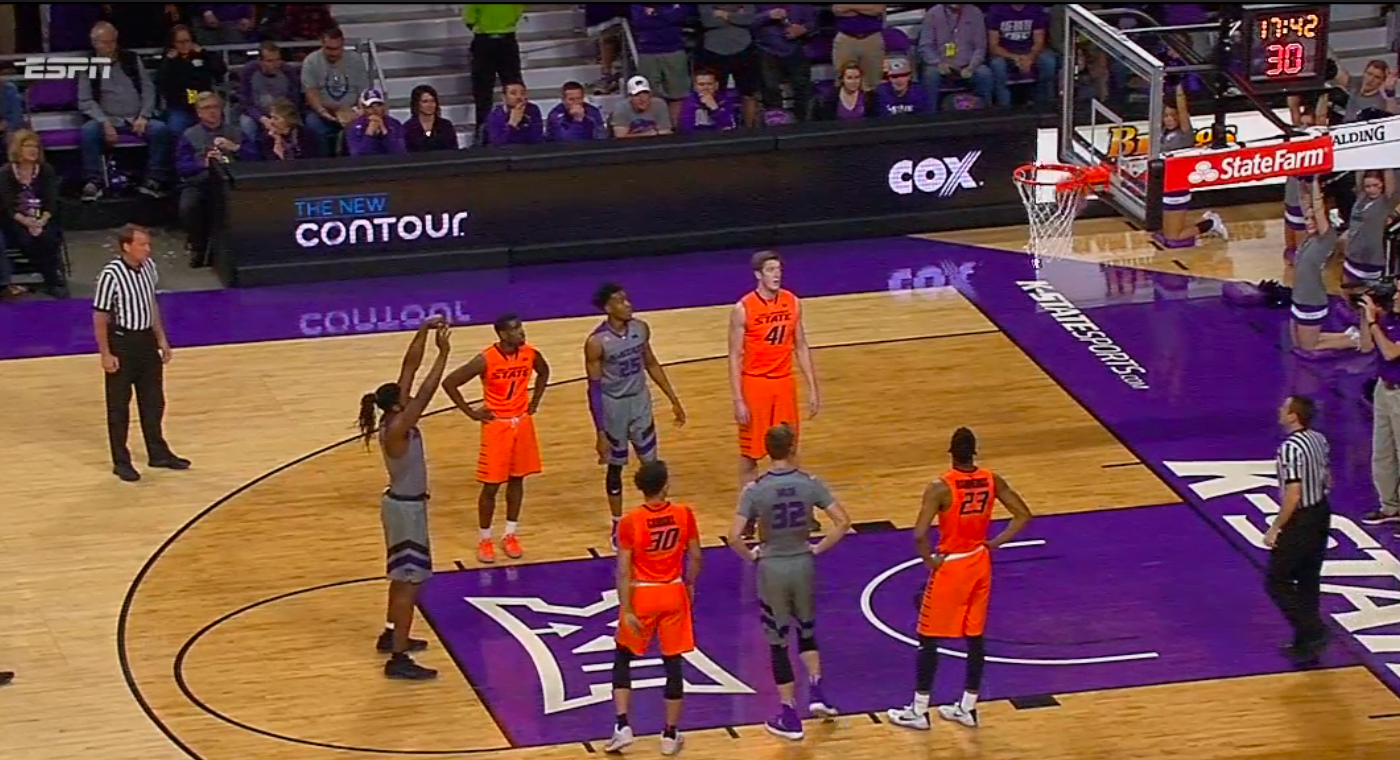 Oklahoma State started out poorly, but finished incredibly strong as Brad Underwood and the Cowboys (19-9, 8-7 in the Big 12) emerged victorious in his return to Manhattan, 80-68. This is their ninth win in their last 10 games.

Jawun Evans, despite shooting just 4-16, got to the line all night, knocking down 11-12 at the charity stripe, finishing with 21 total, and closing the game down like a champ.

Leyton Hammonds played huge as well, adding 18 and 10 boards, and Brandon Averette and Davon Dillard provided a massive boost off the bench with a combined 22 points. Big time.

Another stat worth noting — Brad Underwood, at 5-3 in road games in the Big 12, has more wins already than Travis Ford did the last three years (4-23)

Kansas State (17-11, 6-9 in the Big 12) really needed this one. They are probably on the outside looking in after dropping tonight’s game at home. The Wildcats will finish the season with Oklahoma, TCU, and Texas Tech, and may need to win all three to get in to the NCAA tournament.

On the flip side, Underwood has the Pokes rolling down the stretch as the Big Dance fast approaches. Joe Lunardi had OSU as a projected 7 seed before tonight’s road win over a tough Kansas State team.

The first half started just about as ugly as possible for the Cowboys. They shot just 1-9 from the floor to start and fell behind 15-4, while Evans picked up two early fouls. Trailing by as much as 14 in the first half, the Cowboys rallied to go on a 19-6 run thanks to an opportunistic defense leading to some easy buckets.

Somehow, someway, the Cowboys found themselves down just 39-38 at the half after Jawun Evans hit a contested 3 as the clock ran out. Davon Dillard lead the team with 9 points off the bench, doing typical Davon things.

Averette and Cam McGriff also added 6 a piece off the bench before the break. The Cowboys shot 50 percent from the field, but it didn’t feel like it due to all the turnovers (8 in the first half). K-State was lead in the first half by Wesley Iwundu with 10 points and 6 a piece from Dean Wade and Carlbe Ervin II.

Oklahoma State settled down in the second half, getting solid contributions fromAverette (13 points) and Hammonds, who followed up his impressive road performance in Fort Worth with another dynamite game, notching a double-double. Going Hammonds!

In the end, Underwood gave the rock to No. 1, who took the air out of the ball and iced the game at the free throw line.

Looking ahead, Oklahoma State will try to make it 10 of 11 (!) on Saturday against Texas Tech at Historic Gallagher-Iba Arena.