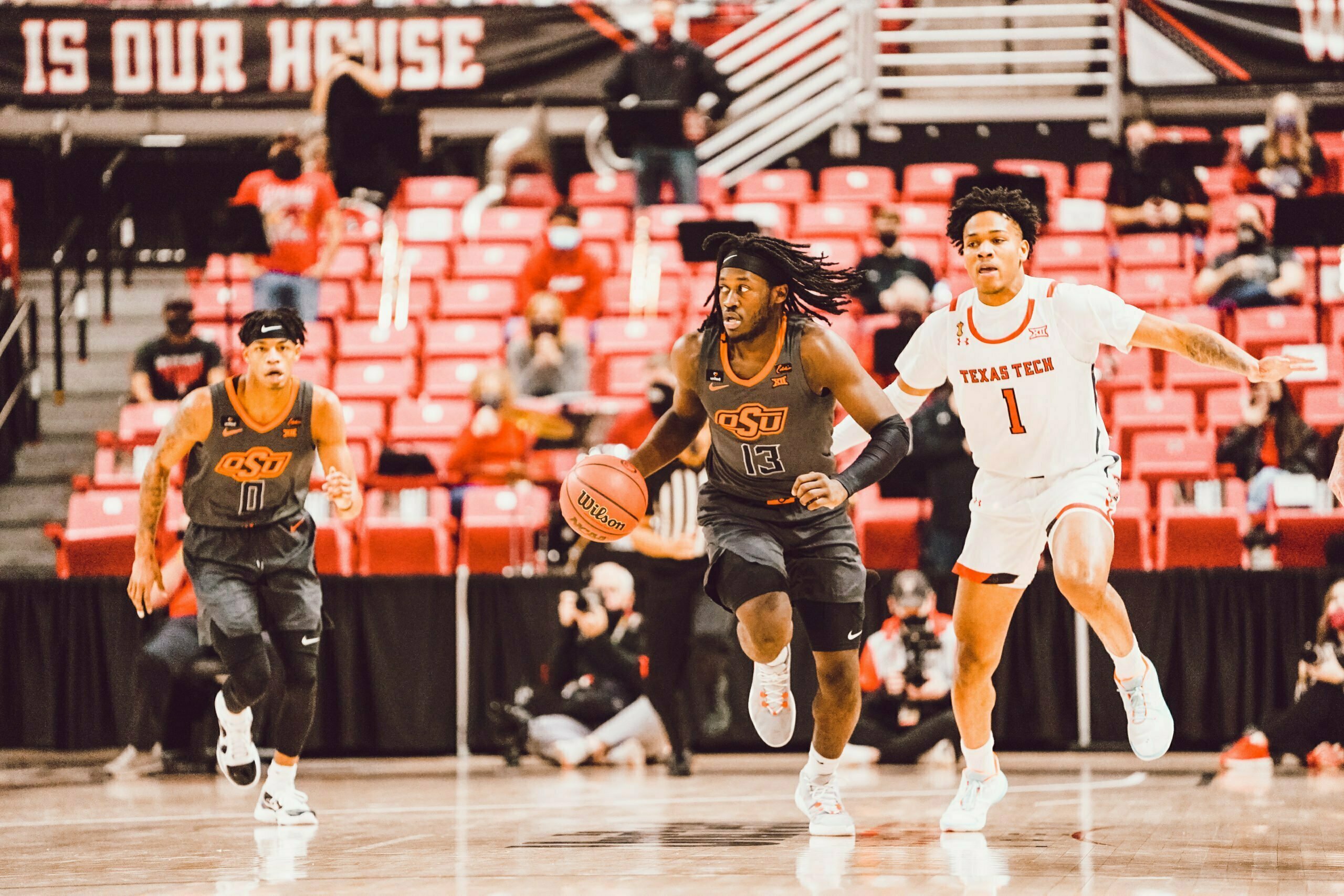 With its best player on the bench, Oklahoma State went blow-for-blow with No. 13 Texas Tech in Lubbock and came out the winner.

Cade Cunningham fouled out with 2:44 left in overtime after the worst shooting game of his career, but the Cowboys were finally able make the plays down the stretch that they needed to pull out a conference victory.

A play here and a missed shot there made the difference in Oklahoma State’s first two conference games, losses by one to TCU and by three to Texas.

So it should be no surprise that the Cowboys’ third Big 12 game would come down to the wire. But it was all Cowboys early on.

The Cowboys started out shooting as hot as they have all season and sped off to a 10-4 lead against one of the best defenses in the nation.

Credit the blazing start to a pair of recent additions to OSU’s starting lineup.

Not to be outdone, Isaac Likekele joined in, rattling off a 3-for-4 start from the field — including a heat check from 3 — to help extend the Cowboys’ lead to 22-10. All while Cade Cunningham was 0-for-1 from the field.

But after starting 9-of-12, the Cowboys went nearly five minutes without making a field goal before Cade made his first shot.

Tech’s leading scorer, Matt McClung used quantity over quality to get things done. You might remember McClung from his Georgetown days when he hung 33 points on Oklahoma State in GIA last year and give the Cowboys their first loss of the season. He had nine points on 2-of-8 shooting in the first half. He finished with 21 points on 15 shots.

Meanwhile, the Big 12’s leading scorer, Cunningham, didn’t score his first point until 7:23 left in the first on a free throw. He didn’t make his first field goal until the 5:03 mark in the first.

While the Cowboys regressed to the mean in the shooting department, they still carried a 37-28 lead into halftime, shooting 12-of-27 from the field and 5-of-12 from deep.

As the Cowboys went cold, the Red Raiders pulled to within 45-43 with 11:10 left. Tech took its first lead with less than seven minutes since going up 2-0 in the early goings. From then it was your classic Big 12 nail-biter.

With Tech up 64-61, the Red Raiders gifted Isaac Likekele a redo on a missed free-throw thanks to a lane violation. He made it count.

A couple possessions later, Likekele had an and-1 opportunity off a layup in transition, but he would miss the free one. A foul call on Cunningham off the rebound gave Tech the chance to extend the lead to 68-65 at the charity stripe with 43 seconds left.

Cade drew a foul on a 3-point attempt with 27 seconds left. He made all three to knot things up at 68-all. Tech’s Kyle Edwards was called for a moving screen with four seconds left, giving OSU a chance for the walk-off.

OSU went to the hot hand of Bryce Williams who surged down the court but lost the handle before he could get the would-be game-winner off.

Rondel Walker was just 1-for-5 from 3 when he lined up from deep. He nailed it to put the Cowboys up 73-71 with three minutes remaining in overtime. A moment later, Cade Cunningham fouled out for the first time in his career.

No worries. Keylan Boone had maybe the play of the game when he scored on a putback, was fouled and made the free one to put OSU up 76-72 with 2:12 left. Then Bryce Williams scored on a run-out dunk to push the lead to 78-72 with under two minutes on the clock.

Tech’s Kyle Edwards made up for his two missed free-throws when he knocked down a 3 to make it 80-77 with 47 seconds to go. Isaac Likekele had good look from the paint to seal the game but it bounced out. Tech ball with a timeout with 11 seconds.

If he hadn’t already, Bryce Williams put his seal on the game with a steal and assist to Avery Anderson as the clock expired.

Anderson and Likekele each finished with 17 points, but the game ball goes to Williams who scored a season-high 15 points on 5-of-9 shooting, four rebounds, three assists. The game-winning play was his second steal of the day.

Texas Tech made a concerted effort to double-team Cunningham as teams will continue to do, but he was able to bring value even though he wasn’t scoring.

Cade started 1-of-7 and finished with 13 points on 3-of-12 shooting. But Cunningham grabbed seven boards, dished out four assists and snagged four steals. Despite his off shooting night, Cunningham was a plus-16 in efficiency and led the Cowboys with a plus-6 in plus/minus.

Two things are apparent. 1) Cade can affect the game without filling it up and 2) the Cowboys can depend on their role players to make game-winning plays. That’s an encouraging sign as the Pokes continue into the meat of their conference slate.