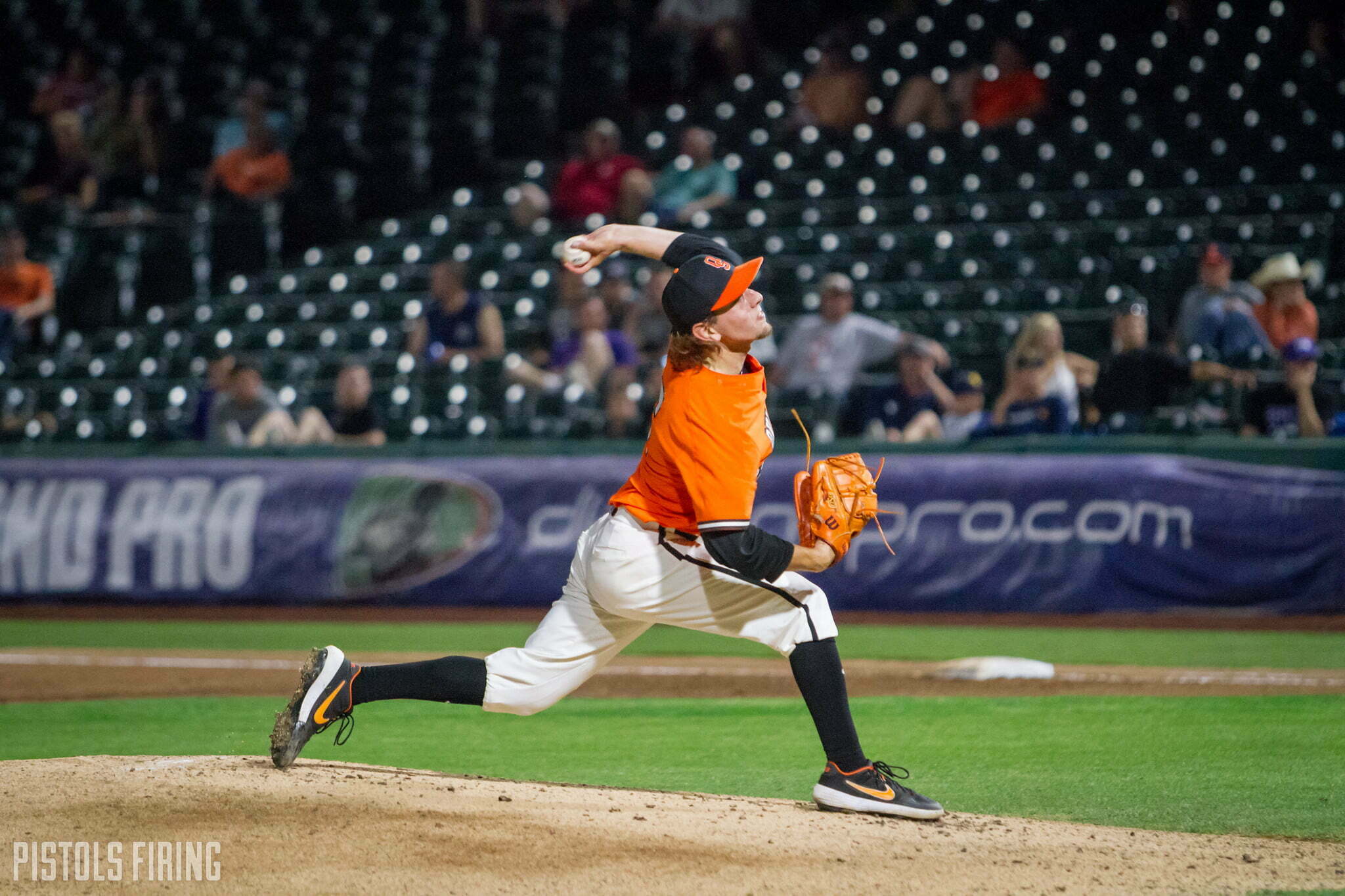 The hometown kid strolled back into Lubbock donning a black hat.

Noah Sifrit appeared in his hometown of Lubbock, Texas as a defensive replacement for Carson McCusker, OSU’s leader in batting average, and ended up scoring the winning run.

Sifrit was walked in the lead-off position of the bottom of the ninth with the score tied 5-5, advanced to second and then third on separate wild pitches before a third wild pitch facilitated his game-winning slide into home (at home).

Oklahoma State evens the Super Regional series 1-1 and forces a Sunday night game that will decide which team goes to Omaha.

The Cowboy freshman was part of the double play that ended the top of the first and then in the bottom of the opening period, he singled, stole second base and then scored the opening run on a Colin Simpson RBI single to right field. The Red Raiders came up with a double play of their own to leave Simpson stranded.

Park Scott lasted only two innings a week ago, in his most recent start, after giving up three runs to Nebraska to start that momentous comeback win. The last time he was in Lubbock (back on April 27), he pitched just four innings before giving up four runs.

On Saturday, he threw one of his better games of the year to help keep the Cowboys alive.

After getting into a heap of trouble in the top of the third, OSU’s sophomore nearly escaped the inning Scott-free.

The Red Raiders evened the scored on a fielder’s choice. At first glance, I was ready to yell at my electronic device, thinking Texas Tech’s Dru Baker was tagged at home, but a closer look showed the opposite and meant an equalizer for Tech.

Then the nightmare scenario unfolded for Scott when he walked Brian Klein to load the bases. Up to the plate came No. 8 overall pick Josh Jung with a chance to become a hometown hero. But Rob Walton stuck with Scott, and Scott got out of the frame, retiring the phenom in four pitches and earning his third strikeout of the day while stranding three.

The Cowboys took a two-run lead in the bottom of the fifth when Morrill hit just his second homer of the year. (See previous statement)

Lubbock, we have a problem. Hueston goes yard. pic.twitter.com/VNyakpVd5m

The Red Raiders would pull to within 3-2 in the top of the sixth, though it took two Red Raider sacrifices to get Brian Klein across home plate.

Tech starter Caleb Killian had himself a game, as well. He matched Scott’s six innings, allowing three runs, five hits and struck out eight before also heading to the dugout.

After Scott stepped aside following six honorable innings, Walton went to his bullpen. He would end up wearing a path from the dugout to the mound.

Facing elimination it was all hands on deck for the Pokes. Three-straight OSU pitchers failed to reach 20 pitches.

But Ben Leeper finally settled in to earn the save. He finished with 27 pitches, allowing just one hit (a run) and striking out one.

Colin Simpson, who has not batted well this postseason, topped his RBI in the first with a two-run homer (his 16th of the season) to put the Cowboys up 5-4 heading into a ridiculous ninth inning.

Oklahoma State somehow survived a disgusting top end of the ninth inning that included a two-base error, a surrendered run and an intentional walk to somehow go into the bottom of the final round tied at 5. Fortunately, Texas Tech’s defensive ninth inning was worse.

The Cowboys stay alive and force the rubber match at 5 p.m. Sunday and are one win away from their second trip to Omaha in four years.