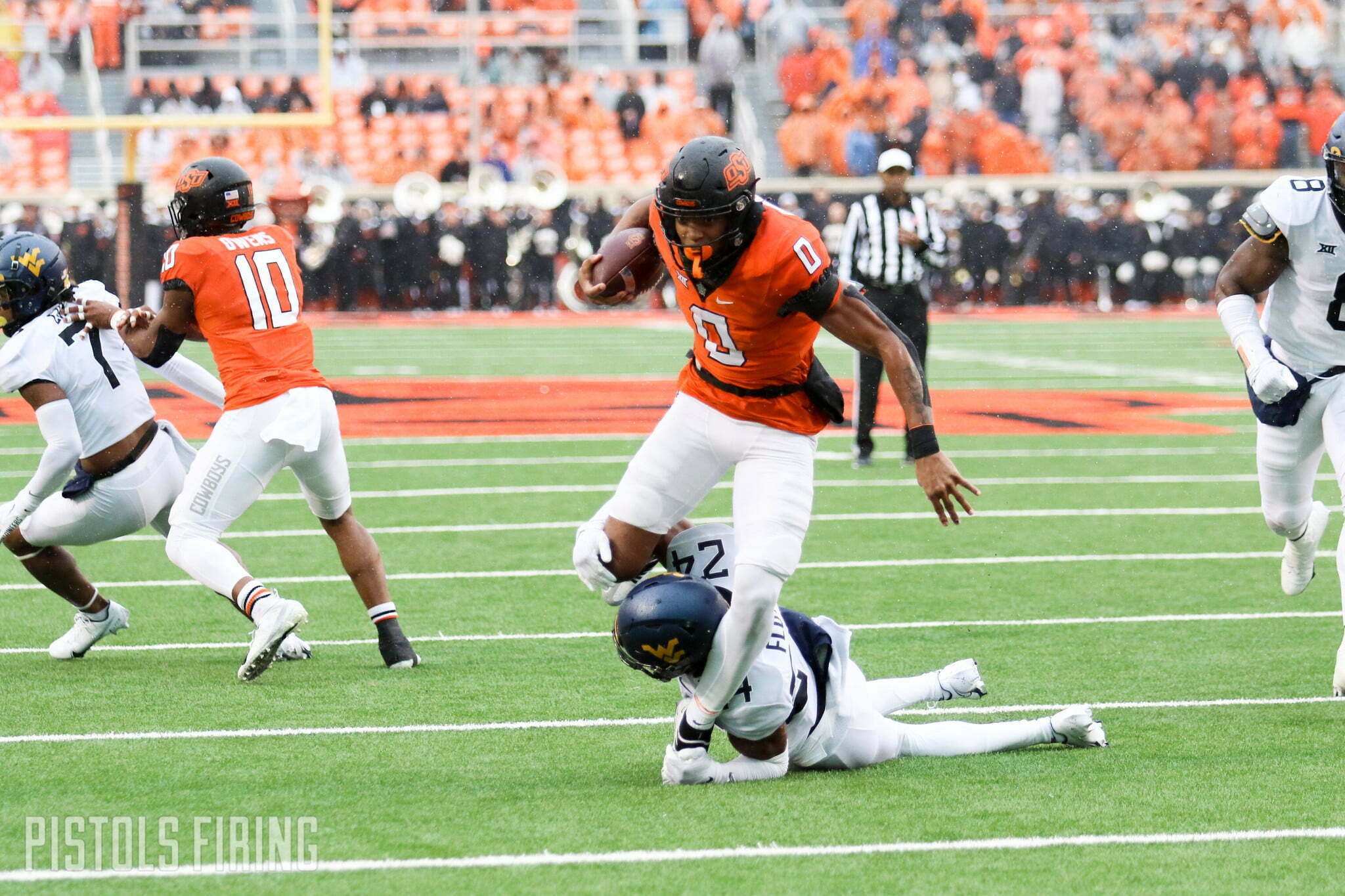 The Cowboys didn’t have Spencer Sanders but they still had a chance to win late, before it slipped right through their rain-soaked fingers.

Oklahoma State fell to West Virginia 24-19 ending a school-record 14-game home win streak and dropping the Cowboys to 7-5 on the season.

Spencer Sanders, who has been banged up for most of the season, was a game-time decision, and that decision was “no.” Garret Rangel took the reins instead, in his second career start. With just two games under his belt coming in, Rangel could also play in OSU’s bowl game and still retain his redshirt.

Rangel’s first throw of the day went for 21 yards, mostly thanks to Brennan Presley, after the catch. But it was mostly hit-and-miss from there. Rangel finished 18-for-42 for 178 yards. He was sacked four times and the constant rain didn’t do him or his receivers any favors. There were a lot of drops which should be expected when it was as wet as it was at Boone Pickens Stadium.

Presley led the Cowboys with 77 receiving yards on seven catches and added a “rushing” touchdown on this backward pass play (below). Braydon Johnson had 60 yards on four catches.

The bright spot for Oklahoma State was that — despite the heavy rainfall — it finally got some traction on the turf inside BPS. OSU total 180 yards on the ground at 4.3 yards per carry. That was the highest rushing total for OSU since its 197 against Arizona State and its highest per-carry average since Arkansas-Pine Bluff, and it came down to No. 0

Ollie Gordon totaled 127 rushing yards and a touchdown coming into Saturday. He only needed three quarters to top that against West Virginia. OSU rushed for negative 10 yards in the first quarter, but then someone decided to give the rock to the freshman. Gordon took his first handoff in the second quarter and took it eight yards and didn’t slow down much the rest of the way. He totaled 136 yards on 17 carries (an eight-yard average) and rushed for a 23-yard score.

Mason Cobb led the Cowboys with 11 total tackles (seven solo), 1.5 tackles for loss and a QB hurry.Kody Walterschield logged a sack and a pass breakup to go with his three tackles. Jason Taylor II logged his sixth interception of the season, padding his Big 12 lead.

Gordon wasn’t the only running back to go off on Saturday. OSU did not have many answers for Jaylen Anderson who ripped up 155 yards of BPS turf, averaging over 10 yards per try. The bulk of that came from back-to-back touchdown runs of 54 and 57 yards that turned a 10-7 OSU halftime lead to a 21-10 WVU advantage.

Along with Garrett Greene’s 36-yard touchdown run, the Mountaineers totaled 250 rushing yards, a Big 12 best this season, and tied a season-high with three rushing TDs. In fact, West Virginia didn’t reach the red zone until midway through the fourth quarter which resulted in a field goal to push the Mountaineers’ lead to 24-19 with 5:59 left on the clock.

In need of a touchdown, Gordon drug the Cowboys down the field with four runs for 36 yards and another catch for 10 before the Cowboys stalled. Facing fourth-and-3 with two minutes left, Rangel went to Gordon again, but he was tied up with a defender and the pass sailed yards past him.

OSU’s defense forced a three-and-out and a wet ball caused WVU’s punter to drop the snap, gather it and shank it to the OSU 46. The Cowboys had a timeout and 1:29 to get down the field but came up empty with four-straight incompletions including a check-down pass that went through Gordon’s hands. In all fairness, it would not likely have made a difference with half the field to go and a handful of Mountaineers looming.

With the loss, the Cowboys finish their regular season 7-5 (4-5 in the Big 12) and await their bowl designation.