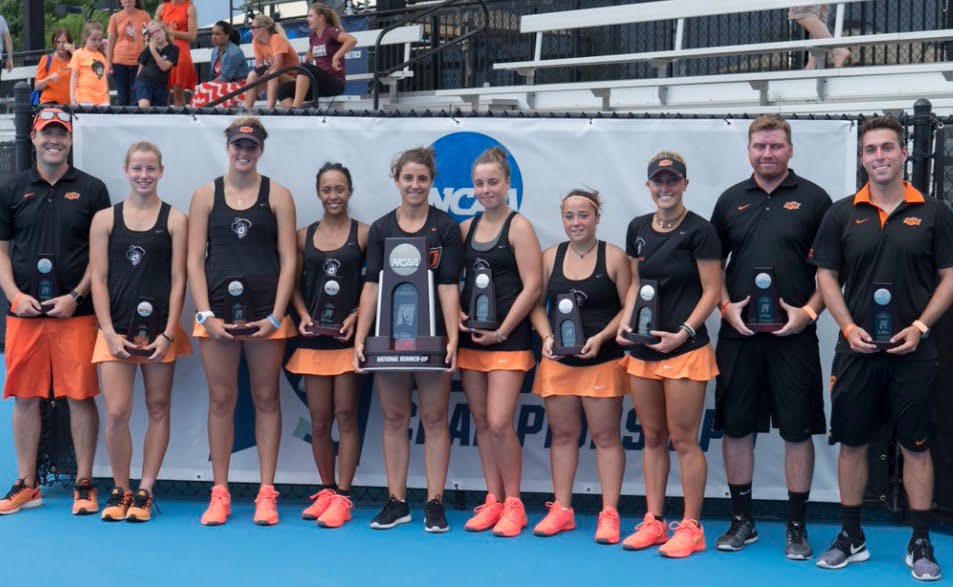 In case you haven’t noticed, the Oklahoma State tennis program has gained tremendous momentum in the last couple of years. Combined with somewhat recent men’s and women’s coaching hires and a state-of-the-art $17.5 million indoor and outdoor tennis complex, OSU tennis had reached heights unforeseen. Walking into standing room only matches with frequent top-15 showdowns has now become a norm.

Again, this is a program that only 4-5 years ago, was having to share tennis court space with the Colvin while actual real Big 12 Conference matches were happening! The transition has simply been remarkable. It is truly amazing the wonders a coaching change (I’m looking at you Brad Underwood), a renewed passion and monetary investment for a sport can have on your program.

Let’s check out what each program has been up to, and what to look forward to this season.

The Cowgirls last season enjoyed the best season ever for the tennis program. In reaching the NCAA Finals, the Cowgirls upset No. 5 seed Georgia, No. 4 seed Ohio State, and in comeback fashion, defeated the previously undefeated and No. 1 overall seed California.

For the many OSU alumni that made the short trip to the Case Center in Tulsa for the NCAA Championships, it was a dream ride. The Cowgirls came within one match of winning its first ever title in the sport. Nonetheless, it was a truly remarkable season for the ladies, who showed tremendous courage and perseverance to reach the summit of collegiate women’s tennis.

The OSU women’s team has been trending up for sure. It only takes a quick glance at their record the last couple of seasons to show the impact the new tennis complex has had on not only recruiting, but the quality of practices.

Looking ahead to this season, OSU returns key members from their 2016 Runner-up team including ITA All-American Katarina Adamovic, 1st Team All-Big 12 Junior Vladica Babic, and 1st Team All-Big 12 Senior Viktoriya Lushkova. The two Cowgirls anchor a young, but talented squad of dominantly Europeans. The Intercollegiate Tennis Association (ITA) has Cowgirls as the 5th-ranked team in the country for the 2017 campaign, the highest ranking in program history.

The Cowgirls will also have the opportunity to enact a little revenge on Stanford, whom the women lost to in the finals, when the two squads meet on February 17th in Florida. With the ladies ranked inside the the top 35 and solid doubles squads, look for them to make noise once again in the Big 12 and beyond. The Cowgirls begin their spring season at the Greenwood Center against Oral Roberts on January 20th.

The OSU men’s tennis is coached by Jay Udwadia who arrived in Stillwater in 2013 after eight years at Fresno State. Since his arrival, he has taken a sub .500 squad to two 20 win seasons in 3 seasons. Pretty impressive stuff here.

Last season, the Cowboy’s tournament run came to an end against eventual national champ Virginia in the Sweet 16. They were rewarded with a postseason ranking of No. 15, one of the highest in program history. Things are only looking up here for these Cowboys. This season, for the first time in OSU Men’s Tennis history, the Cowboys featured the No. 1 doubles team in the country in Julian Cash and Arjun Kadhe. Coach Udwadia features a roster heavy in upperclassmen full of experience.

Senior and Edmond North Graduate Nate Roper is the only American on the squad this year. OSU will open the 2017 season ranked No. 14 along in a stacked Big 12 that for the first time ever has every team ranked (There are only six Big 12 men’s tennis squads).

The Cowboys will have tremendous opportunity to prove their ascension into the upper tier of men’s tennis with a non-conference slate that includes matches against No. 21 Michigan, at No. 13 Northwestern, and home versus No. 2 Wake Forest.  The Cowboys open the spring season at the Greenwood Center against Texas-Rio Grande Valley on January 21st.

ICYMI: @cash_julian and @ArjunKadhe became the first doubles duo to be ranked No. 1 in OSU history today. #okstate pic.twitter.com/T3RysikvLp

Oklahoma State tennis is the best kept secret in town. Their matches are generally free to attend and they frequently have free food there! I mean free admission and free food, what is there not to like? But for real, even if you aren’t a huge tennis fan, the matches are tremendously exciting and a great way to get involved in a non-traditional Cowboy/Cowgirl sport.

P.S. If you have never been to the Greenwood Tennis Center and are curious to know what it looks like, check this out.