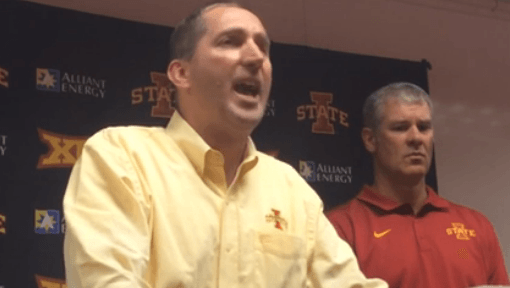 Iowa State’s athletic director Jamie Pollard went crazy in the post game press conference about Big 12 officiating — likely because of this questionable TD by Desmond Roland at the end of the first half.

“We’ve been on the short end of several controversial calls,” said Pollard. “And it’s hard to sit idle and watch ESPN, Fox, other announcers not debate but to feel sorry for Iowa State because maybe there will be another apology for a call.”

“It’s no longer fair to put our student athletes, our coaching staff, and our fans in that position. I don’t know how things change but it’s frustrating and it’s not fair.”

How do you really feel, Jamie?

“I recognize that the Big 12 does not allow comments to be made on officiating. I recognize there are penalties for that. But folks our institution has been penalized already.”

“Something’s gotta be done. I don’t know what it is but there needs to be more accountability on what happens in certain situations.”

I get it. I don’t necessarily fault him for doing this because he wants his squad to know he has their backs. But it does sort of come off as petulant.

Every team gets bad calls, it’s part of sports. Has Iowa State gotten a higher portion than all other teams in the Big 12? I don’t know, maybe they have. But unless you think there’s a conspiracy I’m not sure this is the best way to go about addressing it.