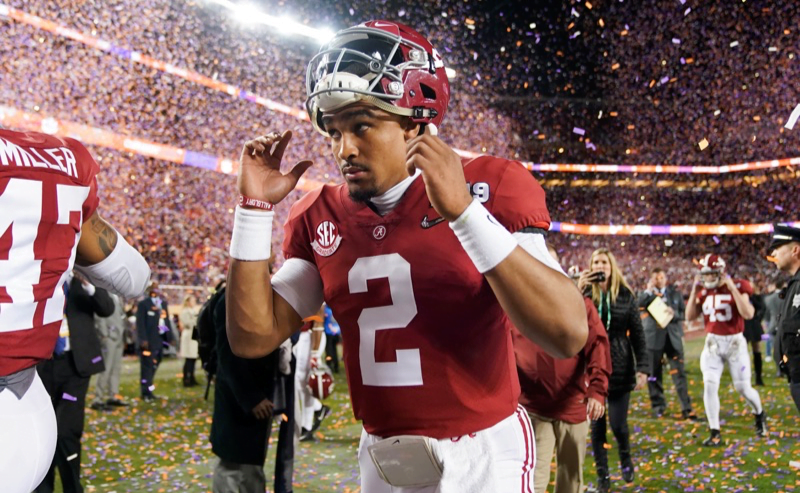 An up-and-down week in Oklahoma State world just went down again. OU got themselves a(nother) QB. Jalen Hurts, who led Alabama to the 2016 CFP title game (where they lost to Clemson) and to the 2017 CFB title game (where Tua Tagovailoa took over and sealed the deal against Georgia) is transferring to … Oklahoma.

That’s right. Lincoln Riley is going Baker Mayfield-Kyler Murray-Jalen Hurts in three consecutive seasons, and even if Hurts splits time it will presumably be with Spencer Rattler, who was the No. 1-ranked pro QB in the 2019 class.

Hurts, who already graduated from Alabama, was picking from a big list of suitors after entering his name into the NCAA’s new transfer portal. Maryland was considered the heavy favorite with teams like TCU, Miami and Houston also in the mix. OU wasn’t even listed (which is odd considering he visited Norman recently).

In the words of A.J. Green.

Hurts announced the news on that bastion of amateur athletics news, The Players Tribune, in a nice letter about how Alabama changed his life but how excited he is about OU.

Now I’m Bama for LIFE — and that right there will never change! But now it’s also time for me to start a new chapter in my story. I’ve decided to take my talents to the University of Oklahoma, where I will continue my development as both a quarterback and as a student. I’m very fortunate to have this opportunity, and I’m excited for the journey ahead.

So to my about-to-be family in Norman, I truly appreciate you for bringing me on board. Y’all don’t know me yet……… but just for now, to introduce myself: I’m a motivated coach’s son from the Eastside of Houston, and I love to play ball. [Players Tribune]

So this is an unfortunate turn of events for Oklahoma State, which will go into 2019 with an unproven QB while OU takes a two-time SEC title-winning signal caller into the year.

Is Hurts the greatest QB in the world? No, and it will be interesting to see how he performs with a defense that is, uh how do I say this, wildly inferior to Alabama’s, but he’s seasoned and he’s talented and his coach is a back-to-back Heisman producer and boy, Spencer Sanders needs to be really good.