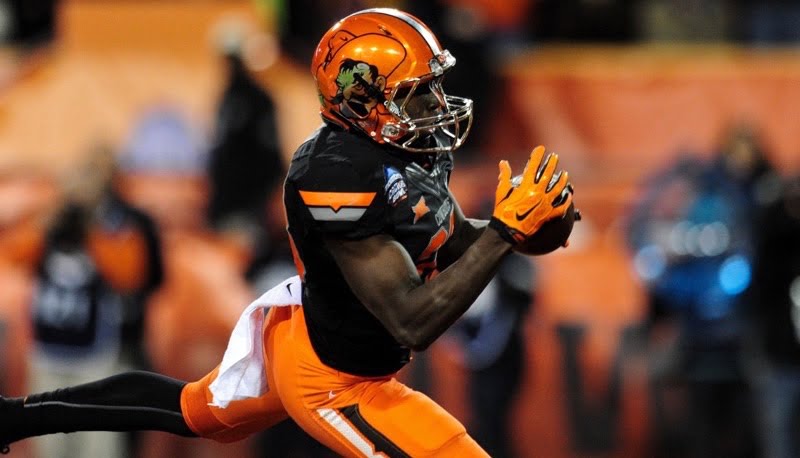 It turned out to be justified as he was a major impact for the Cowboys in the 2014 season over older guys like Jhajuan Seales and Marcell Ateman.

Washington ended the season with 456 yards receiving, and 6 touchdowns to go along with 20 yards rushing.

The true freshman chose to sign with the Cowboys over TCU and Texas State, and although he was only a three-star prospect, seems to be poised to be an impact player for several years to come.

Who’s next on offense?

Washington, however, was not the highest rated receiver for the Cowboys in the 2014 recruiting class. He was a diamond in the rough, yes, but the Cowboys secured an even bigger last year when they also signed a consensus four-star receiver in Keenen Brown from Houston, Tex.

Brown held offers from Texas A&M, Oklahoma, Missouri, LSU, Florida and Oregon, among others. Brown has reportedly been impressive on the scout team while redshirting this season, and will be a name you want to remember for next season.

Another name to keep in mind who could see the field as a sophomore next season alongside Ramon Richards at the cornerback position is Chris Hardeman.

The Cowboys will return good depth next season with starters Kevin Peterson, Ramon Richards, and Ashton Lampkin who is expected to return from injury.

Hardeman played a limited role as a true freshman this season on special teams and had a chance to develop and gain strength this season, but he could be a future star at cornerback.

Hardeman, who was actually a teammate of Keenen Brown, was a consensus four-star cornerback who was a long-time LSU pledge before flipping his commitment to the Pokes.

Are there any true freshmen to watch?

Another true freshman who could make an immediate impact next season for the Cowboys is another receiver, Jalen McCleskey. McCleskey is a three-star athlete from Covington, LA., who had interest from LSU and Tennessee but ultimately committed to OSU in September.

McCleskey appears to be a quicker version of former star Josh Stewart, whose 40-yard dash time is listed at 4.49 according to 247sports. McCleskey could be a game changing receiver who can stretch the field vertically in the air raid system the Cowboys run.[1. Ed. Note: Or we THINK they run.]

What about junior college impact guys?

On the defensive side of the ball, the star linebacker position will be available following Josh Furman’s depletion of eligibility. Oklahoma State signed three-star safety Jordan Burton who played at Kilgore JC last season.

Burton was recruited to help fill the star linebacker position, and at 6-foot-2, 205 he is the exact height and weight as Furman. Burton may not have the same burst of speed that Furman displayed throughout the season, but he makes up for it with awareness and experience.

As a sophomore in 2013 at Stephen F. Austin, Burton played in 11 games and recorded 74 tackles, including 36 solo, which ranked fourth on the team. At Kilgore JC last season, Burton recorded 108 tackles in just six games, including 52 solo tackles and 3 fumble recoveries.

Here are his highlights:

Running back will be key

The final impact player to keep an eye on for next season is whoever decides to sign with the Cowboys at the running back position.

“That’s what we have to get,” said Mike Gundy on Wednesday. “We have to pick up a running back in this class. We can’t talk about (specific prospects). We have everything we need. We just need to get a running back, and we will.”

With the departure of Desmond Roland and dismissal of Tyreek Hill, whoever signs with the Pokes will be poised to see significant playing time as a freshman.

There will be a lot of familiar names returning at the skill positions for the Cowboys next season compared to last year. Look for these young standout playmakers to make an instant impact on the field next season.