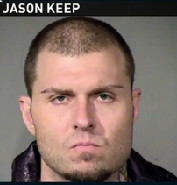 Well we’re a long way from that broken backboard in GIA.

Jason keep was arrested last week and charged with armed robbery. According to AZCentral.com Keep and two others were arrested for holding up a cabaret joint for nearly $20,000.

“The armed robbery occurred on Tuesday at about 2p.m. as two employees of an adult cabaret left a restaurant near 44th Street and Thomas Road and were robbed at gunpoint of $18,000, according to court documents.”

The entire report is pretty terrifying and includes some actual shots fired (not Twitter ones).

One line in the report says “Keep’s booking information lists him as 6 feet 11 inches tall and weighing 280 pounds.” Sooo…maybe he has some eligibility left? Can we at least check?